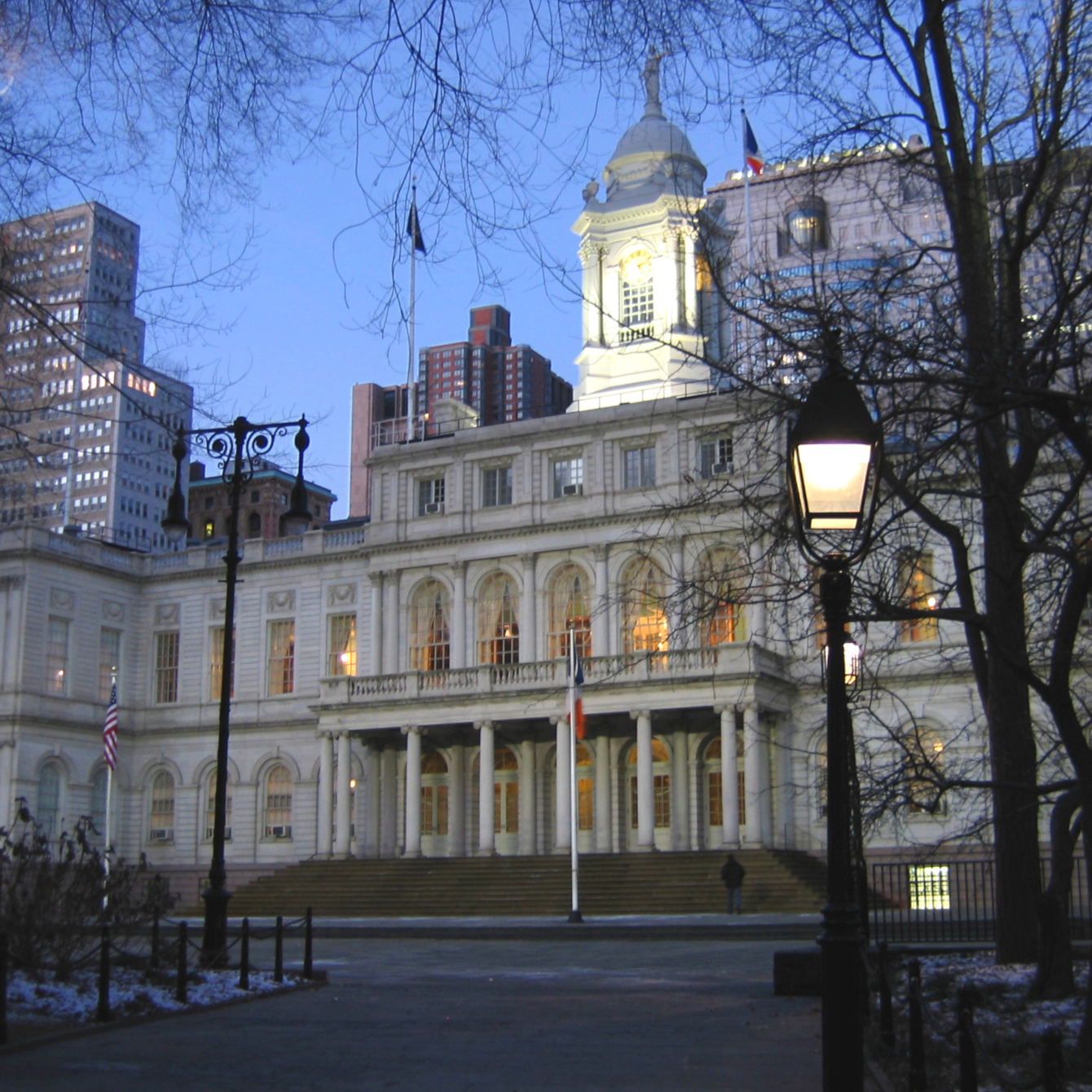 The Gay Activists Alliance held a number of zaps and other actions in City Hall Park from 1970 to 1975 in support of Intro 475 (Clingan-Burden Bill), and its later versions, which would prohibit discrimination in housing, public accommodation, or employment based on sexual orientation. GAA flyer for the Candlelight March to City Hall on June 24, 1971. Source: Archives of Sexuality and Gender. Arnie Kantrowitz chased by a policeman on horseback at the GAA City Hall Zap, June 25, 1971. Photo by Rich Wandel. Courtesy of The New York Public Library. 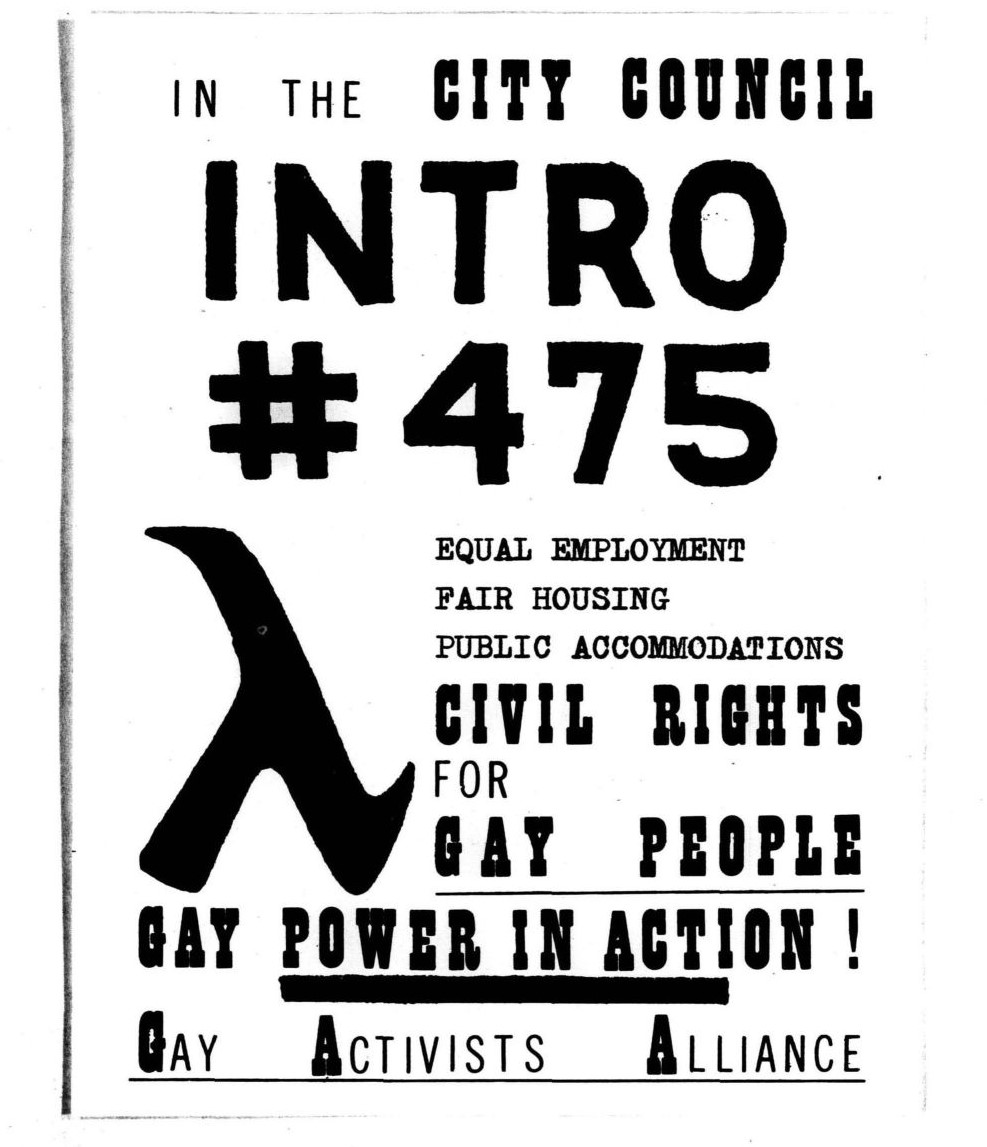 Gay Rights "Freedom Bus" in support of Intro 2 on May 11, 1974. Photo by Bettye Lane. Courtesy of the Schlesinger Library on the History of Women in America, Radcliffe Institute for Advanced Study, Harvard University.

The Gay Activists Alliance (GAA), formed in December 1969, held its first picket on March 5, 1970, at City Hall. Over 30 GAA members attempted to enter the building to meet with Mayor John V. Lindsay over his failure to take a public stance against police harassment, and in support of ending discrimination, against the gay community. The group was confronted by police on foot and on horseback and forced onto Broadway, where they picketed for two hours. This action resulted in a meeting with a representative of the Mayor.

GAA strongly advocated for anti-discrimination legislation. On June 2, 1970, City Council Minority Leader Eldon R. Clingan announced that he would introduce a bill to extend the city’s fair employment practices law to prohibit discrimination in employment based on sexual orientation or preference. He was joined by Councilmen Carter Burden, Leonard Scholnick, and Theodore S. Weiss, and the bill became known as Intro 475 (Clingan-Burden Bill, or Clingan-Burden-Scholnick-Weiss Bill). It was broadened to prohibit discrimination in housing, public accommodation, or employment based on sexual orientation under the NYC Human Rights Law. It was first introduced before the New York City Council on January 6, 1971, and was announced as the first of its kind in the United States. Passage of Intro 475 became one of the major goals of GAA, but it was stalled without a committee assignment under the Council’s homophobic Democratic Majority Leader Thomas J. Cuite.

During the second Gay Pride Week, activists held a series of pickets and other actions at City Hall highlighting Intro 475. On June 24, 1971, GAA, Daughters of Bilitis, Radicalesbians, and Mattachine Society New York held a Candlelight March, starting at 9:00 p.m. at the GAA Firehouse. About 500 people marched along Spring Street, and then down Broadway to City Hall. A rally there featured speeches by Councilman Clingan and GAA president Jim Owles, who also read a letter of support from Congresswoman Bella Abzug.

The following day, on June 25, GAA had a zap at City Hall protesting Cuite. (See our curated theme for background on the “zap” tactic.) At 1:00 in the afternoon, GAA members began picketing, while about ten people attempted to enter City Hall to meet with Cuite to pressure him to take action on Intro 475. They were blocked from entering the building, and police attempted to push people down the stairs, while police on horseback rode into the GAA crowd. Despite this, about 30 members remained for half an hour protesting. Nine people were arrested: Owles was charged with resisting arrest, while Marty Robinson, Arnie Kantrowitz, Arthur Evans, Steve Krotz, David Sklar, Michael Bardin, Ed Casson, and Bob Ruecker were charged with disorderly conduct. This was one day after the first anniversary of the arrest of the “Rockefeller Five” — considered the first LGBT protestors arrested for gay rights in New York City — at GAA’s zap at the headquarters of New York Republican State Committee. The zap at City Hall resulted in a promise from Cuite to meet with GAA and the sponsors of Intro 475, and a letter was sent from the Mayor’s office requesting hearings on the bill. The “Cuite 9” were acquitted on September 9.

We have exhausted every conceivable form of lobbying for the bill. We are not about to sit quietly while one man destroys this legislation which is so important to the gay people of New York City.

Councilman Saul Sharison, chair of the General Welfare Committee, was then assigned Intro 475 by Cuite, but GAA found that the committee had not even met in two years. After zaps at his apartment building on September 30 and October 3, 1971, Sharison finally released the bill five days later. Three hearings were held between October 1971 and January 1972. Intro 475 was supported by Eleanor Holmes Norton, chair of the NYC Commission on Human Rights.

GAA continued to protest Lindsay’s lukewarm support in assuring passage of the gay rights bill. On January 26, 1972, a day after GAA zapped his presidential campaign fundraiser at Radio City Music Hall, seven members were arrested at City Hall after first posing as a Columbia University journalism class and then chaining themselves to interior railings, and member Jo Carroll to the Mayor’s desk. The “Lindsay 7” were Carroll, Cora Perrotta, Frank Arango, Bruce Gelbert, Nathalie Rockhill, Brenda Howard, and Ed Eisenberg. On the next day, January 27, Intro 475 died in the General Welfare Committee. Lindsay was then threatened with protests by gay rights groups wherever he appeared nationally in his campaign for the presidency.

On February 7, 1972, the Mayor announced an administrative directive to protect LGBT city employees against discrimination in hiring and promotion, claiming to be the first public official in the country to do so. On July 19, 1972, Intro 475 was defeated for the second time. After the defeat of Intro 475 again on April 27, 1973, GAA disrupted New York’s Diamond Jubilee Celebration, commemorating the Consolidation of Greater New York, on April 30. GAA president Bruce Voeller was arrested while leading a demonstration during the afternoon ceremonies, and trans activist Sylvia Rivera was arrested for attempting to climb a wall of City Hall. Ten others were arrested protesting in City Hall.

Intro 475 was defeated for a fourth time in committee on December 19, 1973. It was reintroduced in the Council as Intro 2 in January 1974. On April 18, the General Welfare Committee finally passed it, allowing the bill to go to the full Council. GAA took several actions in support of Intro 2, including a large demonstration at Christopher Park on May 4, and a Gay Rights “Freedom Bus” tour of Manhattan, Brooklyn, the Bronx, and Queens on May 11-12. The full Council killed the bill on May 23.

It was reintroduced in the Council as Intro 554 in June 1974. GAA held another rally at City Hall in support of the bill on May 5, 1975. What later became known as the “gay rights bill” was introduced in the City Council every subsequent year, but was not passed until March 20, 1986. 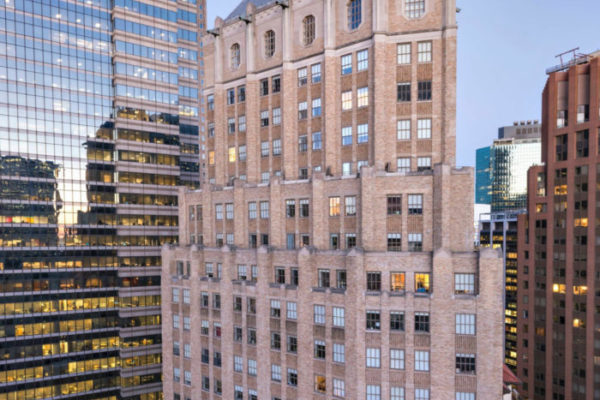