Located just across from the Stonewall Inn, Christopher Park has been at the center of the LGBT rights movement since the historic 1969 uprising.

The park was included within the boundaries of Stonewall’s National Register of Historic Places listing in 1999 and its National Historic Landmark listing in 2000, and it is also located within Stonewall National Monument, created in 2016. Demonstration in support of Intro 2 at Christopher Park on May 4, 1974. Photo by Bettye Lane. Courtesy of the Schlesinger Library on the History of Women in America, Radcliffe Institute for Advanced Study, Harvard University. 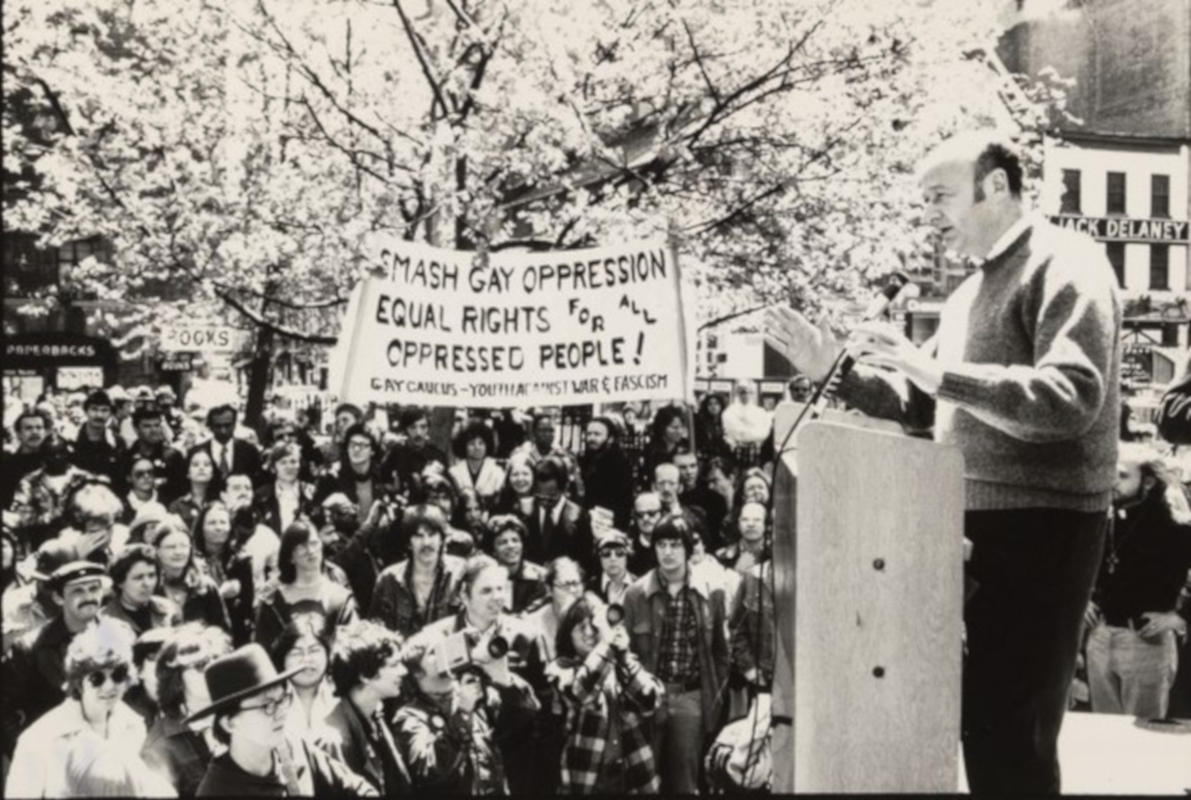 Congressman Edward I. Koch speaking at the demonstration in support of Intro 2 at Christopher Park on May 4, 1974. Photo by Bettye Lane. Courtesy of the Schlesinger Library on the History of Women in America, Radcliffe Institute for Advanced Study, Harvard University. 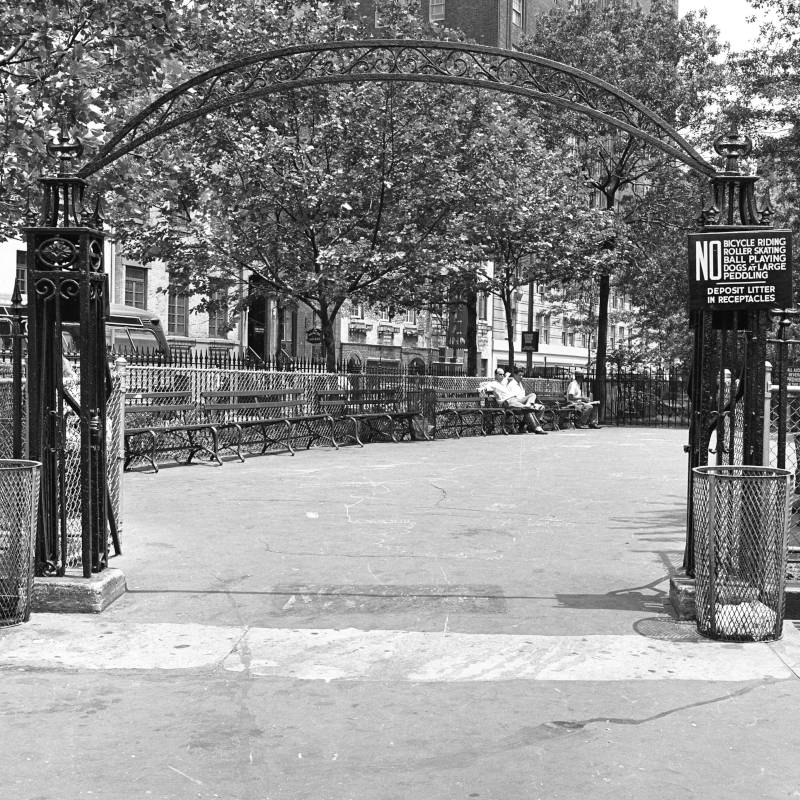 Tree pits along Christopher Street edged with Belgian blocks, 1967. These stones undoubtedly were among the objects thrown during the Stonewall Uprising. Some parking meters were also reportedly uprooted and used. Courtesy of the New York City Parks Photo Archive. 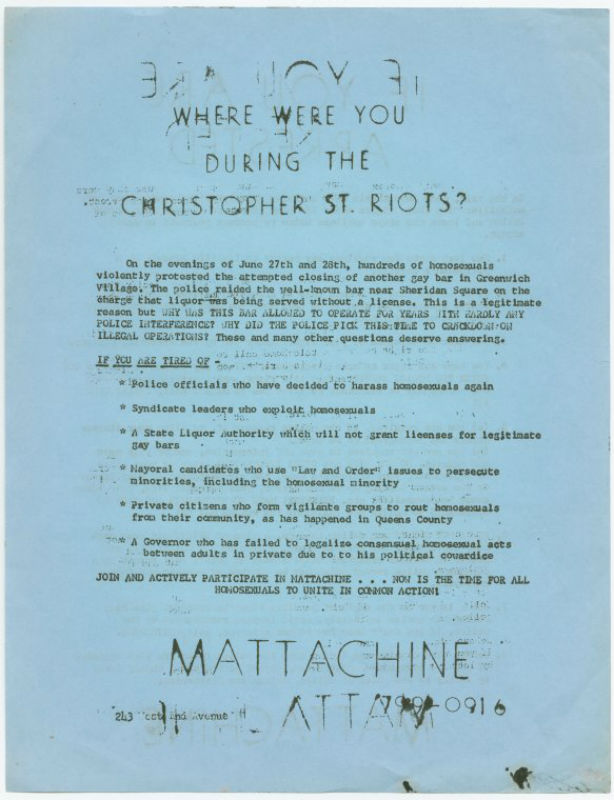 "Where were you during the Christopher Street riots?" flyer from the Mattachine Society, 1969. Courtesy of the Manuscripts and Archives Division, The New York Public Library. 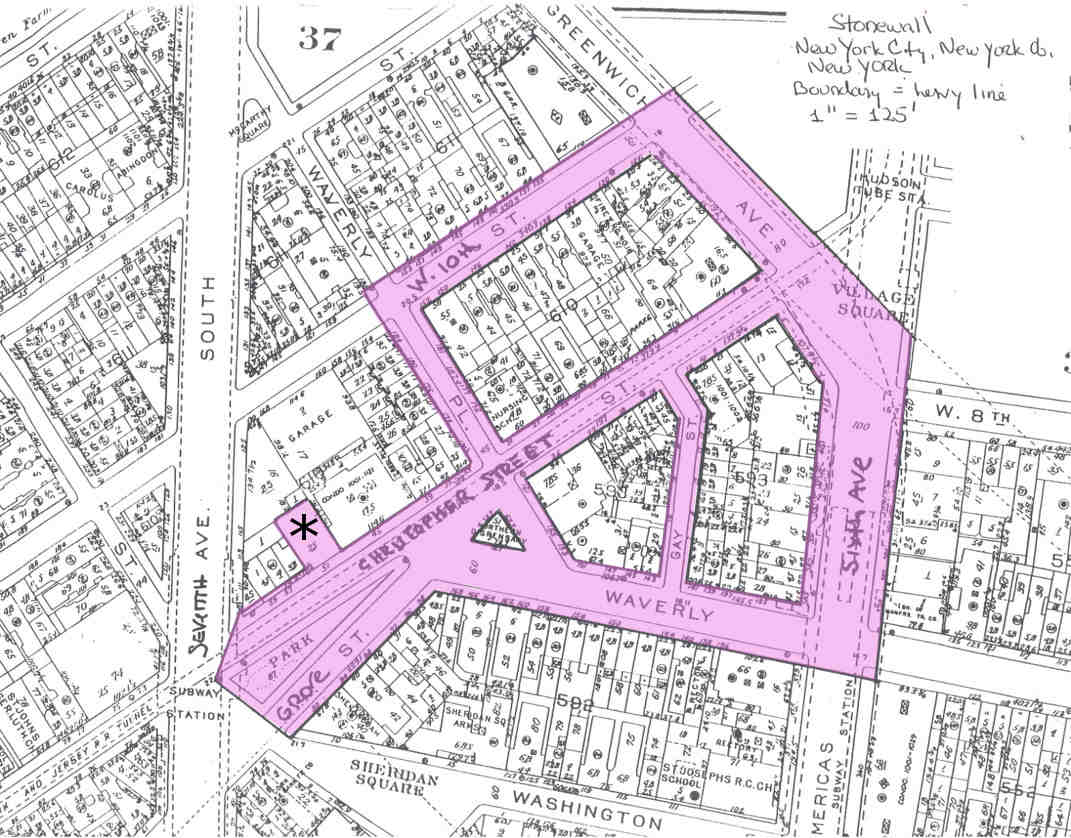 Rare color view of the Stonewall sign (back right) as actresses Diane Baker and Hope Lange cross Christopher Street in a screen capture from the film "The Best of Everything" (1959). Christopher Park is visible at left. "Stonewall Inn" sign on the side of a building (at left) in a photo taken from Seventh Avenue South and Grove Street, May 12, 1940. The trees on the right are part of Christopher Park and a portion of Stonewall can be seen above the car in the foreground. Photographer unknown. Courtesy of the New York Public Library.

Christopher Park, the triangular landscape across from the Stonewall Inn, has played an important role in the history of the LGBT rights movement. Interestingly, due to a number of possible factors, including the fact that a statue of General Sheridan was placed here in the 1930s, the park has historically been misidentified as Sheridan Square (this is actually a group of streets with a landscaped median around the corner). As such, accounts of the Stonewall uprising and other LGBT-related events that occurred in or near Christopher Park sometimes incorrectly refer to it as Sheridan Square.

Even before the June/July 1969 Stonewall uprising, Christopher Park was a favorite hangout for a diverse group of (often homeless) gay street youth and those who might identify today as transgender. By the time of the uprising, crowds took over the park and Christopher Street and, at its peak, several thousand people filled the streets. In 1999, the 30th anniversary of the uprising, Christopher Park was included in the National Register of Historic Places nomination for the Stonewall Inn, a nomination co-written by two founders of the NYC LGBT Historic Sites Project. According to this National Register nomination, Christopher Park and portions of Grove Street, Gay Street, Waverly Place, Greenwich Avenue, Sixth Avenue, and West 10th Street played a critical role:

The street pattern in this neighborhood is significant because it is one of the elements that contributed to the events of late June and early July 1969 and helps to explain why this police raid sparked a riot while others did not. … There are many streets leading directly into and out of the site of the Stonewall Inn.

A month after the uprising, LGBT activists Marty Robinson and Martha Shelley addressed a crowd of several hundred people in the park, capping off a rally that began in Washington Square Park to protest the police’s actions at Stonewall.

After Intro 475, a bill to prohibit discrimination in housing, public accommodation, or employment based on sexual orientation, was defeated for the fourth time (since 1972) in the General Welfare Committee of the City Council in December 1973, it was reintroduced the following month as Intro 2. On April 18, 1974, the committee finally passed it, allowing the bill to go to the full Council. The Catholic Archdiocese of New York and the Uniformed Fire Officers Association, however, mounted an influential opposition campaign. In response, the Gay Activists Alliance took several actions in support of Intro 2, including a large demonstration of over one thousand people at Christopher Park on May 4. One of the speakers was Congressman Ed Koch. The full Council killed the bill on May 23.

In 1979, the tenth anniversary of the Stonewall uprising, New York City announced that a commemorative statue by sculptor George Segal would be placed in Christopher Park. Activist Bruce Voeller initially proposed the idea to place a statue in the park commemorating LGBT liberation. Due to controversy from Village residents, LGBT activists, and lack of official support, Segal’s Gay Liberation (1980) sculpture was not installed here until 1992, when it was unveiled by Mayor David Dinkins. Executed in bronze, with the artist’s signature white patina, the memorial was commissioned by arts patron Peter Putnam, who stipulated that the figures “had to be loving and caring, and show the affection that is the hallmark of gay people…and it had to have equal representation of men and women.” Mysteriously abstract, Gay Liberation avoids direct reference to the uprising. The sculpture, commissioned through the Mariposa Foundation, has become an important focal point of the park. A second cast was installed on the campus of Stanford University in California in 1984, though it was vandalized and restored that year and again in 1994.

In the 1980s, landscape architect Philip N. Winslow, who later died of AIDS-related causes, redesigned portions of the park. His work included installing new benches and brick paving. The overall park configuration still looks as it did during the Stonewall uprising.

According to early LGBT rights activist Randy Wicker, Christopher Park (and Christopher Street) was also where his friend and longtime roommate Marsha P. Johnson, an influential trans activist of color, could often be found panhandling; she would frequently give this money away to those in need. Johnson was a critical figure during the Stonewall uprising and in the years following, though she is sometimes mistakenly credited with sparking the riots. In a 1989 interview with historian Eric Marcus, she notes, “I was uptown and I didn’t get downtown until about two o’clock, because when I got downtown the place was already on fire. And it was a raid already. The riots had already started.” Shortly after the uprising, Johnson formed the Street Transvestite Action Revolutionaries with trans activist Sylvia Rivera. In Christopher Park, she also spoke at activism-related events, such as the anti-Anita Bryant rally on May 10, 1978 (Bryant, a singer-turned-political activist, was an early outspoken opponent of homosexuality).

In June 2016, after a multi-year effort by local advocates, President Barack Obama designated Stonewall National Monument, the boundaries of which encompass Christopher Park and are identical to the boundaries established in the National Register of Historic Places listing in 1999 and National Historic Landmark listing in 2000. Only the portion of Christopher Park within the iron fence had its ownership transferred from the City of New York to the federal government; while the Stonewall buildings remain in private ownership and the streets are still under the jurisdiction of the City, they are all within the national monument boundary described in the President’s 2016 proclamation.

A rainbow flag was added to the Elmer Ephraim Ellsworth Flagpole at the eastern edge of Christopher Park, outside of the federally-owned portion, in September 2017. 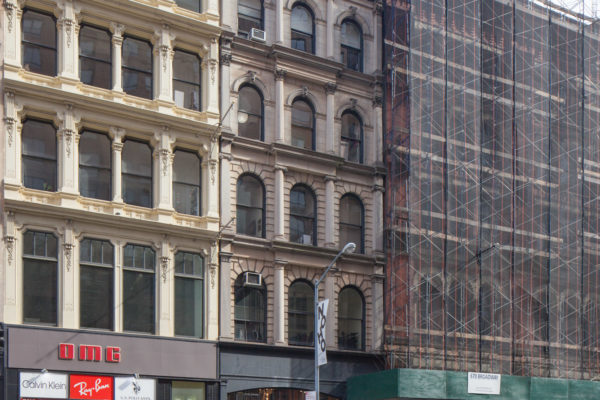