Gay rights activist Craig Rodwell established the East Coast’s first gay and lesbian bookstore (and the first one in the nation to operate long term), named in memory of Oscar Wilde, in a storefront of this apartment building on Mercer Street in 1967.

In 1973, Rodwell moved the store, which also operated as a vital community center, to 15 Christopher Street. Craig Rodwell in front of the Oscar Wilde Memorial Bookshop, appearing in the summer 1969 issue of Queen's Quarterly. From the Collection of Fred Sargeant. Graffiti on the restroom wall of the Oscar Wilde Memorial Bookshop, 1969. Photo by Diana Davies. Courtesy of the Manuscripts and Archives Division, The New York Public Library. Craig Rodwell at the Oscar Wilde Memorial Bookshop, likely in 1971 (based on the Sunday, June 27th Christopher Street Liberation Day March flyer on the wall behind him). Bookshelves built by Ellen Broidy of the Gay Liberation Front. Courtesy of the New York Public Library. Oscar Wilde Memorial Bookshop ad in the summer 1969 issue of Queen's Quarterly. From the Collection of Fred Sargeant. Homophile Youth Movement featured in a Reminder Days ad appearing in the summer 1969 issue of Queen's Quarterly. From the Collection of Fred Sargeant. Craig Rodwell, an active member of the Mattachine Society of New York, suggested that Mattachine open a bookstore that would also have offices and space for community meetings. When Mattachine rejected this idea, Rodwell decided to do it himself, despite the fact that he had no experience running a bookstore. At the age of 26, Rodwell rented a very public storefront on Mercer Street near Waverly Place. The shop was named after Oscar Wilde, who, Rodwell wrote, was “the first homosexual in modern times to defend publicly the homosexual way of life, is a martyr to what has recently become known as the ‘homophile movement.’”

The shop stocked books and periodicals that dealt with gay and lesbian issues in a positive manner; Rodwell refused to sell pornography. Rodwell saw the bookstore as a community bulletin board, carrying announcements of important activities, as a clearing house for those interested in law reform in New York State, and as a spur to writers who would now have a place to sell their gay-themed work. On his letterhead and on the store window, he called Oscar Wilde “A Bookshop of the Homophile Movement.” He modeled the store after the Christian Science reading rooms he had grown up with, which sought to impart a positive image of the world.

The Oscar Wilde Memorial Bookshop had its grand opening weekend on November 18-19, 1967, becoming the first gay and lesbian bookstore to operate on the East Coast. It was preceded by Adonis Bookstore, in San Francisco, which opened several months earlier, in March 1967. However, after a couple of years, Adonis evolved into a gay adult bookstore, which made Oscar Wilde the first of its kind in the United States to operate long term.

At first, Oscar Wilde only offered a limited number of publications for sale and Rodwell had to spread books out so that the shelves would appear full. His first year was a rough one – vandals broke in three times. But eventually, the shelves were filled with more and more LGBT-related publications. A public presence was crucial to Rodwell’s vision for the store: its front window was adorned with slogans such as “Gay is Good” and “Gay Power.”

It was the first time in American history that literature had been organized under the subject heading of ‘gay culture.’

People who worked here included Ellen Broidy, who was then a student at NYU and the first president of its Student Homophile League, as well as a member of other LGBT activist groups. The Mercer Street store also became the headquarters for the Homophile Youth Movement, where Rodwell often counseled young gay men and women and tried to set a positive example for them, so, as he said, they would “gain a sense of pride and dignity as young homosexuals.”

In 1973, Rodwell decided to open a second store on Christopher Street, close to the center of gay life in New York and also called the Oscar Wilde Memorial Bookshop. He kept the Mercer Street store open for several months, for “sentimental reasons,” but finally closed it in May 1974. 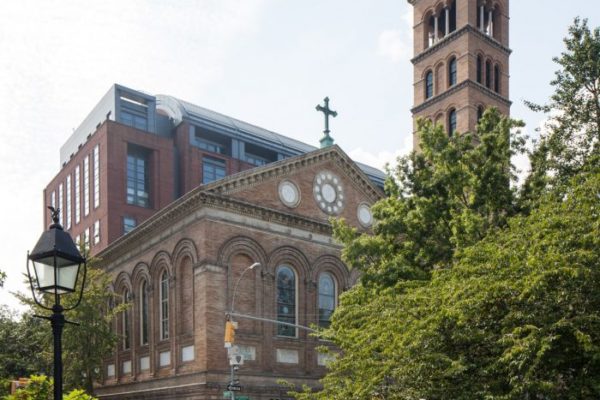