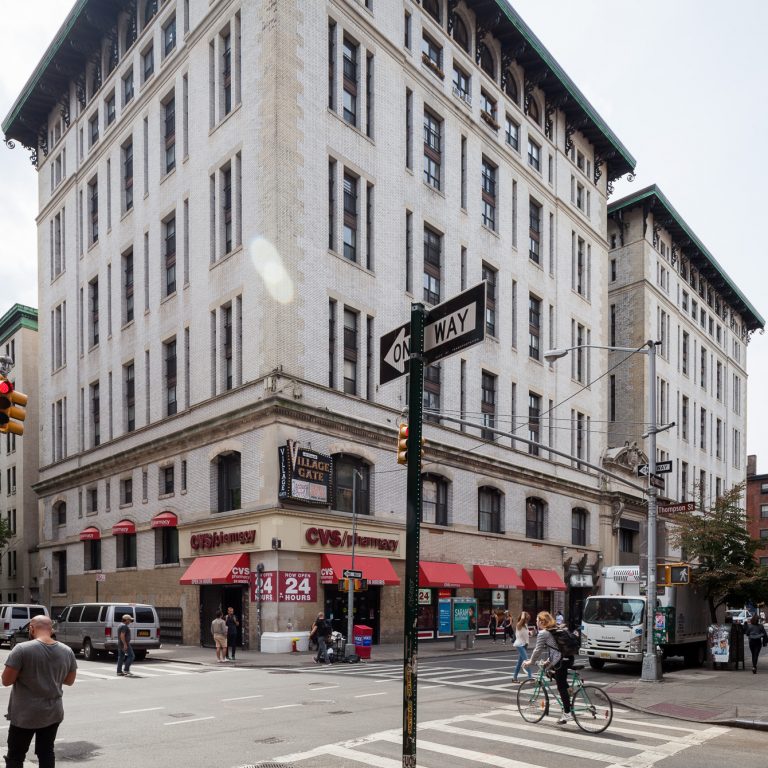 Opened in 1897 as Mills House No. 1, which was intended as a wholesome residential hotel for single, working-class men, this building ironically became desirable for gay men because they could live and socialize more easily undetected (the building served as a men’s hotel until the 1970s).

In the latter half of the 20th century, the Village Gate nightclub and Top of the Gate performance venue played host to a number of LGBT notables. Men in one of Mills House No. 1's interior courts, 1902. Photo by Jacob A. Riis. Courtesy of Art and Picture Collection, The New York Public Library. Top of the Village Gate playbill for "Why Hanna's Skirt Won't Stay Down" by Tom Eyen. Source: eBay. Twiggy and Tommy Tune in "My One and Only," 1980. Photo by Kenn Duncan. Courtesy of the Billy Rose Theatre Collection, The New York Public Library. Entryway of the former Mills House No. 1, 2016. Photo by Christopher D. Brazee for the NYC LGBT Historic Sites Project.

Mills House No. 1 opened in 1897 as an innovative residential hotel that provided 1,554 low-cost single rooms for unmarried working-class men, at a time when more single men than ever were migrating to New York City. The building was one of a number of similar residential hotels established by moral reformers as safe, clean, and wholesome alternatives to the city’s supposedly licentious rooming houses, transient hotels, and the like.

Intended to keep a rising number of single men away from women and families in crowded tenement districts, residential hotels like Mills House No. 1 ironically became “major centers for the gay world and served to introduce men to gay life,” according to historian George Chauncey in his book Gay New York.. Other examples include Mills House No. 2 (built in 1896-97; demolished) at Rivington and Chrystie Streets on the Lower East Side and Mills House No. 3 (built in 1906-07), which still stands at 485 Seventh Avenue in Midtown. Mills House No. 1, with its clean rooms, restaurants, laundry facilities, lounges, and interior courtyards, was considered “a palace at twenty cents a night,” according to Scribner’s Magazine. Its all male-housing accommodations was also particularly desirable to working-class gay men because they could live and socialize more easily undetected, though they still faced being harassed and arrested.

Its attractiveness as a residence for working-class gay men is suggested by the frequency with which its residents appeared in the magistrate’s courts.

Mentions of arrests appeared in the record books of the Society for the Suppression of Vice, which was founded by Anthony Comstock in 1872 under the auspices of the Young Men’s Christian Association (YMCA) of New York. According to Chauncey, the Society “played the most active role in the [World War I] wartime crusade against homosexuality.” Following Comstock’s death in 1915, John Sumner became the Society’s leader and made homosexual issues his most important campaign by working with the police to arrest gay men where they typically congregated for sex, including theaters, bathhouses, streets, saloons, movie theaters, subway washrooms, and restaurants. Chauncey provided examples of three gay men – a 43-year old Irish laborer, 42-year-old Italian barber, and 38-year-old French cook – whose names appeared in the Society’s March 1920 records as residents at either Mills House No. 1 or No. 2, but were arrested elsewhere.

Mills House No. 1, which became known as the Greenwich Hotel after 1949, continued as a men’s hotel until the 1970s. The building was converted to condos in 1976 and is currently used as an apartment-hotel.

Village Gate and Top of the Gate
The Village Gate nightclub occupied the lower floors from 1958 to 1994; its upstairs space, Top of the Gate, closed in 1995. When Top of the Gate began hosting performances in July 1974, a revival of Why Hanna’s Skirt Won’t Stay Down by Tom Eyen was its first show. LGBT entertainers at the Top of the Gate include, among others, jazz singer Billie Holiday, theater artist Tommy Tune, and famed female impersonator and self-described “male actress” Charles Pierce, who made his New York City debut here with the opening of The Charles Pierce Show on Christmas night in 1974. The show’s success, which featured his now legendary impersonation of actress Bette Davis, led to a five-month run and an (Off-Broadway) Obie Award for Pierce.