In 1972, Queens schoolteacher Jeanne Manford publicly spoke out in support of her gay son Morty at a time when homosexuality was still classified as a mental disorder by the American Psychiatric Association.

A year later, Jeanne and her husband Jules founded the nation’s first support group for parents of lesbian and gay children, now known as PFLAG, and held meetings in this house. Morty Manford with his niece at the c. June 1975 Gay Pride March (Jefferson Market Library is visible in the background). Courtesy of PFLAG National. 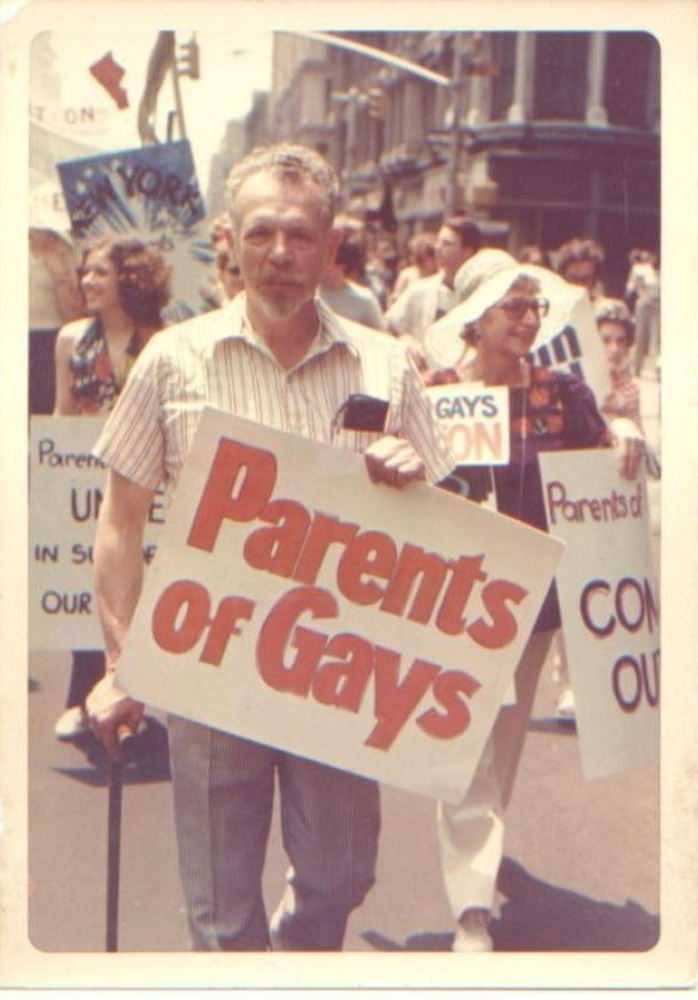 PFLAG members on the steps of the U.S. Capitol, Washington D.C., in an undated photo. Courtesy of PFLAG National. Jeanne Manford holding a photo of her son Morty, 1996. Morty died of AIDS in 1992. Photo by Valerie Shaff. Courtesy of PFLAG National. Jeanne, a Jewish native of Queens, was a schoolteacher at nearby Public School (P.S.) 32. She first garnered public attention in April 1972 after writing a letter to the editor of the New York Post about her outrage at the police for not protecting gay activists when they were beaten during a GAA “zap” at the Hilton Hotel in Manhattan. The letter sparked discussion about anti-gay violence and including a striking statement for its time:

I am proud of my son, Morty Manford, and the hard work he has been doing in urging homosexuals to accept their feelings and not let the bigots and sick people take advantage of them in the ways they have done in the past and are continuing to do.

Two months later, Jeanne walked alongside Morty in the Christopher Street Liberation Day March (today’s Pride March). In an iconic photo, Jeanne holds a sign that reads, “Parents of Gays: Unite in Support for our Children.” This action was particularly extraordinary at the time since the vast majority of people still clung to many negative perceptions about the LGBT community. It was not until a year later, for example, that the American Psychiatric Association finally removed homosexuality from its list of mental disorders. In a 1989 interview with historian Eric Marcus, Morty stressed the importance of his mother’s involvement in that march:

The symbolic presence that my mother provided was a sign of great hope that parents can be supportive. That the people we’re closest to, whom we love the most, need not be our enemies; [they] can be our supporters.

The unexpected response Jeanne received from gay and lesbian youth, who pleaded with her at the march to talk to their parents, led her and her husband to form Parents of Gays (POG) in 1973, the first support group of its kind in the nation. The group met regularly at the Metropolitan-Duane United Methodist Church (now The Church of the Village) in Greenwich Village in the 1970s and 1980s, but also held meetings in this house. Soon after, chapters began forming around the country and POG was renamed Parents, Families and Friends of Lesbians and Gays (PFLAG). Jeanne and Jules made numerous television appearances and spoke at the West Side Discussion Group, the Queens Borough Public Library, and elsewhere.

Jeanne, who outlived her husband, became a beloved matriarch of the LGBT community. Less than a year after Morty died from AIDS-related complications at the family’s Flushing home, Jeanne was asked by then-Queens schoolteacher (and current City Council Member) Daniel Dromm to be the first grand marshal of the Queens Pride Parade. She agreed on the condition that Dromm help her start a Queens chapter of PFLAG. In 1996, she sold the family house; the proceeds she made from selling her furniture went to support Queens Pride House, which was established a year later in Queens Borough Hall.

In 2012, Jeanne was awarded the Presidential Citizens Medal by President Barack Obama for her pioneering efforts with PFLAG and as an ally for LGBT rights. On April 26, 2014, the City of New York named the section of 171st Street between 33rd and 35th Avenues “Jeanne, Jules, Morty Manford PFLAG Way” in their honor.