Most New York City branch libraries are named for the neighborhood or geographic location, but a number are named in honor of prominent figures.

The Langston Hughes Community Library and Cultural Center, in Queens, is one of three branch libraries in New York City that inadvertently honor an LGBT individual. The Langston Hughes Community Library and Cultural Center has been located in its current building since 1999. Founded in 1969, it was the first public institution named for African-American poet and writer Langston Hughes (1901-1967), thus honoring one of New York City’s most significant LGBT individuals. One of the foremost figures of the Harlem Renaissance, which promoted Black art and culture, Hughes’ lifelong fascination with Harlem is evident in much of his writing, which often features the neighborhood and the people he encountered there. He would later be referred to as the “Poet Laureate of Harlem.” Though private about his personal life, he is generally believed to have been gay. He was an active participant in the gay social circles of the Harlem Renaissance and included homosexual subtext in his writing.

This library was formed through the activism of the Library Action Committee of Corona-East Elmhurst, a committee of the local Community Corporation, an anti-poverty program responsible for identifying needed services in the neighborhood, which had a majority Black population. It started as an experimental library, located in a former Woolworth’s storefront at 102-09 Northern Boulevard, with a concentration of material on Black culture. It was granted full branch library status in 1987.

After three decades, the library outgrew its building, due largely to its Black Heritage Reference Center of Queens County, considered the state’s largest public circulating collection on Black heritage. Its new facility opened in 1999. The main entrance is decorated with an image of Hughes and an excerpt of one of his poems. In 2013, the library was named a Literary Landmark by United for Libraries. 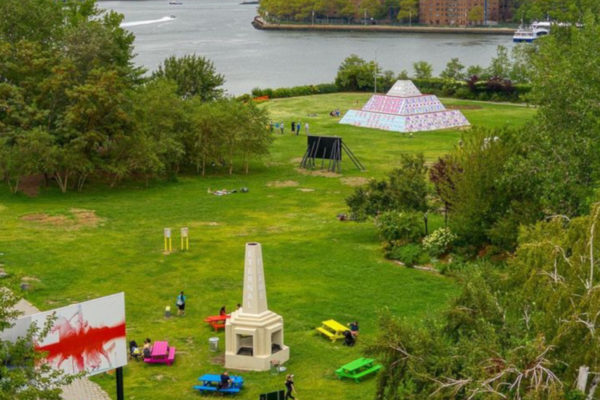