New York City’s first ever Pride March was held on Sunday, June 28, 1970 (the one-year anniversary of the Stonewall uprising), and, much to the organizers’ surprise, attracted thousands of participants.

Known at the time as the Christopher Street Liberation Day March, the route began on Washington Place between Sheridan Square and Sixth Avenue in Greenwich Village, moved north up Sixth Avenue, and ended with a “Gay-In” in Central Park’s Sheep Meadow. Craig Rodwell discussing the march permit with NYPD officers on Washington Place, June 28, 1970. Photo published in the "Gay Freedom 1970" issue of Queen's Quarterly. From the Collection of Fred Sargeant. Fred Sargeant and Craig Rodwell, two of the march organizers, in Central Park's Sheep Meadow, June 28, 1970. Photo published in the "Gay Freedom 1970" issue of Queen's Quarterly. From the Collection of Fred Sargeant. Permit for the Gay Be-In in Central Park, 1970. Source: Archives of Sexuality and Gender. 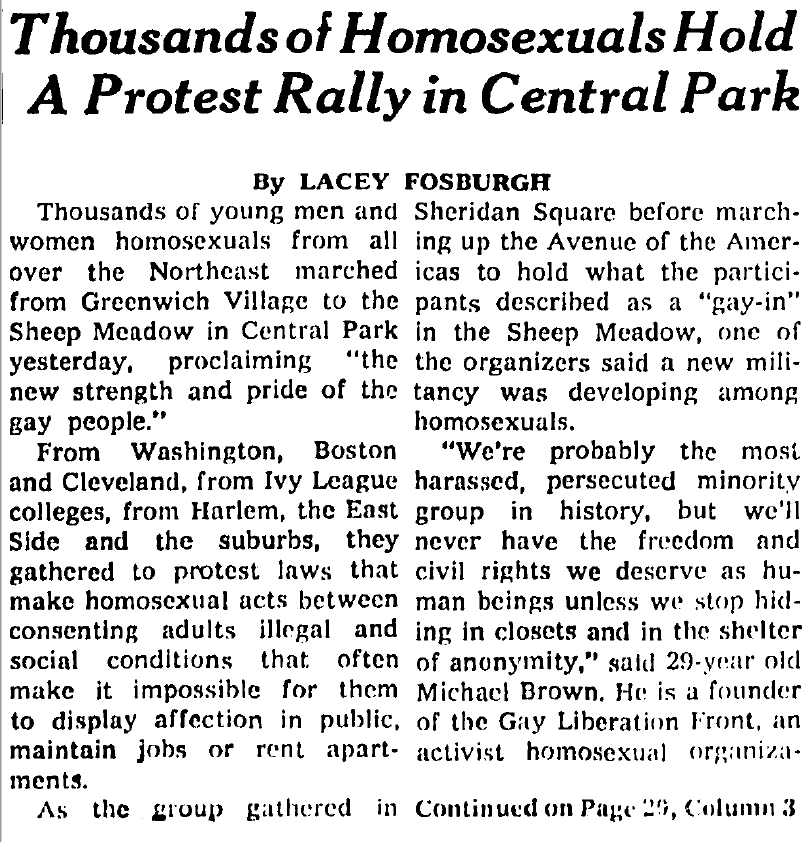 Front page article about the first Pride March appearing in the June 29, 1970 issue of The New York Times. At the one-year anniversary of the Stonewall uprising on Sunday, June 28, 1970, a group headed by Craig Rodwell, owner of the Oscar Wilde Memorial Bookshop, led what became the first annual NYC Pride March (then known as the Christopher Street Liberation Day March). Rodwell had been an organizer of the annual Fourth of July Reminder Day demonstrations in front of Independence Hall in Philadelphia, from 1965 to 1969. Among the earliest significant LGBT protests in the United States, these were held to highlight the community’s lack of basic civil rights.

The last Reminder Day took place on July 4, 1969, only one day after the end of the Stonewall uprising. Rodwell chartered a bus of younger people from New York, who joined the Philadelphia demonstration but did not adhere to the strict conservative dress code, nor did they follow the “orderly” rules of conduct of previous years. It was clear that the events at Stonewall had already changed things. In October, in Rodwell’s and his boyfriend Fred Sargeant’s apartment at 350 Bleecker Street, meetings were held to discuss an action to replace the Reminder Days. In attendance were Ellen Broidy, Linda Rhodes, and other members of the newly formed Gay Liberation Front, and activist Foster Gunnison, Jr.

At the final annual Eastern Regional Conference of Homophile Organizations (ERCHO) in Philadelphia, on November 2, 1969, the following resolution was proposed on behalf of Rodwell, representing the Homophile Youth Movement, and Broidy, of NYU’s Student Homophile League: “That the Annual Reminder, in order to be more relevant, reach a greater number of people, and encompass the ideas and ideals of the larger struggle in which we are engaged – that of our fundamental human rights – be moved both in time and location.” It continued:

Finally: “No dress or age regulations shall be made for this demonstration. We also propose that we contact Homophile organizations throughout the country and suggest that they hold parallel demonstrations on that day. We propose a nationwide show of support.”

All at the meeting voted in favor except for Mattachine Society of New York, which abstained. The march ended up taking place on a Sunday, June 28, so that more people could participate. The marchers first gathered on Washington Place between Sheridan Square and Sixth Avenue, which was the official assembly point (Waverly Place was the auxiliary assembly point), in Greenwich Village. With a noon kick-off, they followed a route up Sixth Avenue to Central Park, where the march ended with a “Gay-In” in the Sheep Meadow. This incredibly brave, for the time, public march ended up attracting thousands of participants, much to the surprise of the organizers. As historian Lillian Faderman commented, “Never in history had so many gay and lesbian people come together in one place and for a common endeavor.” The annual March contributed greatly to solidifying the significance of Stonewall in LGBT history.