Openly gay Reverend C. Edward “Ed” Egan, Jr. led the Metropolitan-Duane United Methodist Church from 1971 to 1977, when he was forced into early retirement because of his homosexuality.

From 1973 to c. 1996, the church was the meeting location of the support group now known as PFLAG, the first such group in the world for parents of lesbian and gay children. Between 1974 and 1976, the church was also the first meeting location of the Salsa Soul Sisters, a black and Latina lesbian group. From c. 1977 to 1988, the church hosted services by the Metropolitan Community Church of New York, which was founded to minister to the LGBT community whose members were not welcome in most churches. Jeanne Manford holding a photo of her son Morty, who died of AIDS in 1992. Courtesy of PFLAG National. Parents and Friends of Lesbians and Gays pin. 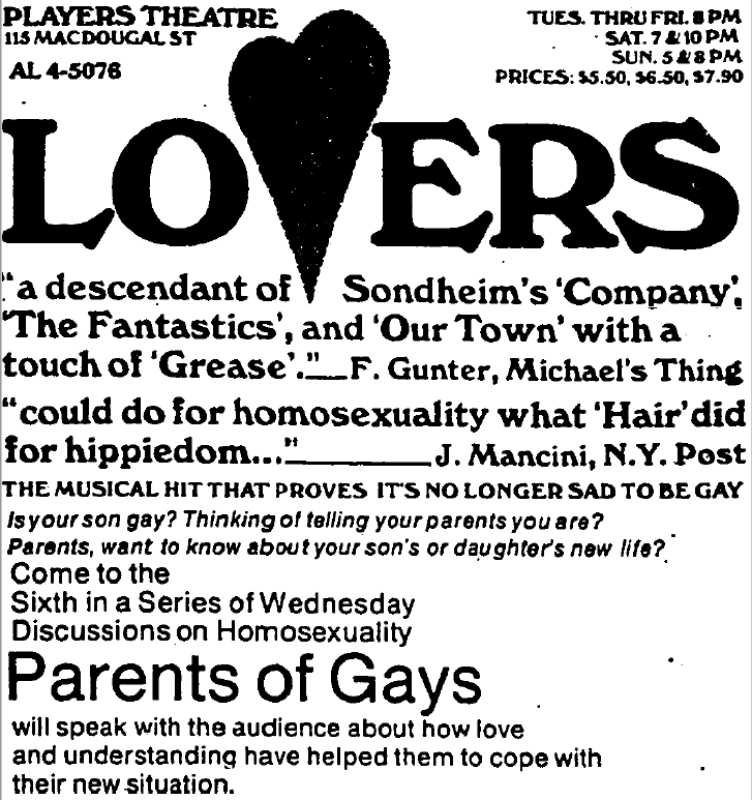 Ad for the play “Lovers” at the Players Theater and a discussion with Parents of Gays appearing in The New York Times, April 29 1975. 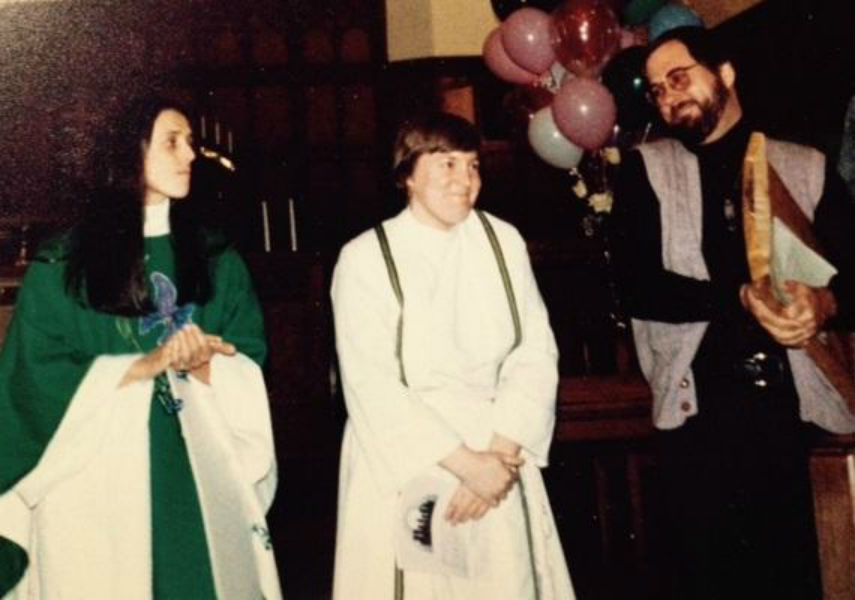 Reverend Clarence Edward “Ed” Egan, Jr. (1923-1994), the openly gay minister here from 1971 to 1977, was passionate about social justice and the civil rights of minorities. He had been active in the early Gay Rights movement — in the 1950s, he led a Christian discussion group with Mattachine Society New York, and was on its board of directors, and was also a spiritual counselor for the Daughters of Bilitis. He was on a panel at the fifth annual national Mattachine conference at the Barbizon Plaza Hotel in 1958. Metropolitan-Duane had a racially mixed congregation, and Egan opened church space to be used for community outreach. In 1977, due to his homosexuality, he was forced into early retirement when the Methodist Church deemed him “unable to fulfill his responsibilities as a pastor.”

In 2017 the Church of the Village attempted to make amends for the Methodist Church’s treatment and dismissal of both Reverend Egan and Reverend Paul M. Abels, minister at Washington Square United Methodist Church from 1973 to 1984. The church sent a petition for a formal apology to the New York Annual Methodist Conference, and dedicated plaques in honor of the two men.

PFLAG
Egan was a key early supporter of Parents of Gays (later Parents & Friends of Lesbians and Gays, now PFLAG) whose first meeting was on March 11, 1973, at Metropolitan-Duane, attended by about 20 people. This was the first support group in the world for parents of lesbian and gay children, and sought to give parents a place to ask questions, talk about their issues, and begin to better understand their children. It was founded by Jeanne Manford, a Queens schoolteacher, along with her husband, Jules. Manford had always been supportive of her activist gay son, Morty Manford. After police failed to intervene while he was beaten during a Gay Activists Alliance demonstration in April 1972, she wrote a letter to the New York Post expressing her outrage and the statement “I have a homosexual son and I love him.” In June, she walked with Morty in the Christopher Street Liberation Day March, holding a hand-written sign that read “Parents of Gays: Unite in Support for Our Children.” The overwhelming response she received – cheers, tears, hugs, and requests by March participants for her to talk to their own parents – convinced the Manfords of the need for a group for parents. PFLAG met here monthly apparently until 1996 when Jeanne left New York City.

Salsa Soul Sisters
The Salsa Soul Sisters, a black and Latina lesbian group, was founded in 1974 by Reverend Dolores Jackson, Sonia Bailey, Harriet Alston, and others to provide a community and discussion group for lesbians of color as an alternative to the bar scene, where they had also faced racial discrimination. Credited as the nation’s oldest black lesbian organization, the group grew out of the Black Lesbian Caucus, which formed in 1971 as a subcommittee of the Gay Activists Alliance. Salsa Soul met at Metropolitan-Duane from 1974 to 1976, at which point they moved to their long-time meeting space in the parish house of the Washington Square United Methodist Church.

Metropolitan Community Church of New York
Metropolitan-Duane also hosted services by the Metropolitan Community Church of New York, founded in 1972 to minister to the spiritual needs of the LGBT community. MCC first met at Church of the Holy Apostles until 1974; then had offices on the third floor and midweek services in the “Triangle Building” at Ninth Avenue and West 14th Street; and Sunday services at Metropolitan-Duane (c. 1977-88). Karen Ziegler was MCC’s senior pastor from 1979 to 1988. MCC rented office space and started its food pantry in the former Food and Maritime High School across the street, but faced eviction by the City in 1982. MCC was one of the key LGBT groups that coalesced and negotiated for the City to sell the building for use as what became the Lesbian and Gay Community Services Center (now the LGBT Community Center) in 1983. Ziegler became a founding vice president of the Center. MCC held Sunday morning services at the Center (c. 1983-94); Sunday evening services at Washington Square United Methodist Church (c. 1988-94); and moved to its current location at 446 West 36th Street in 1994.