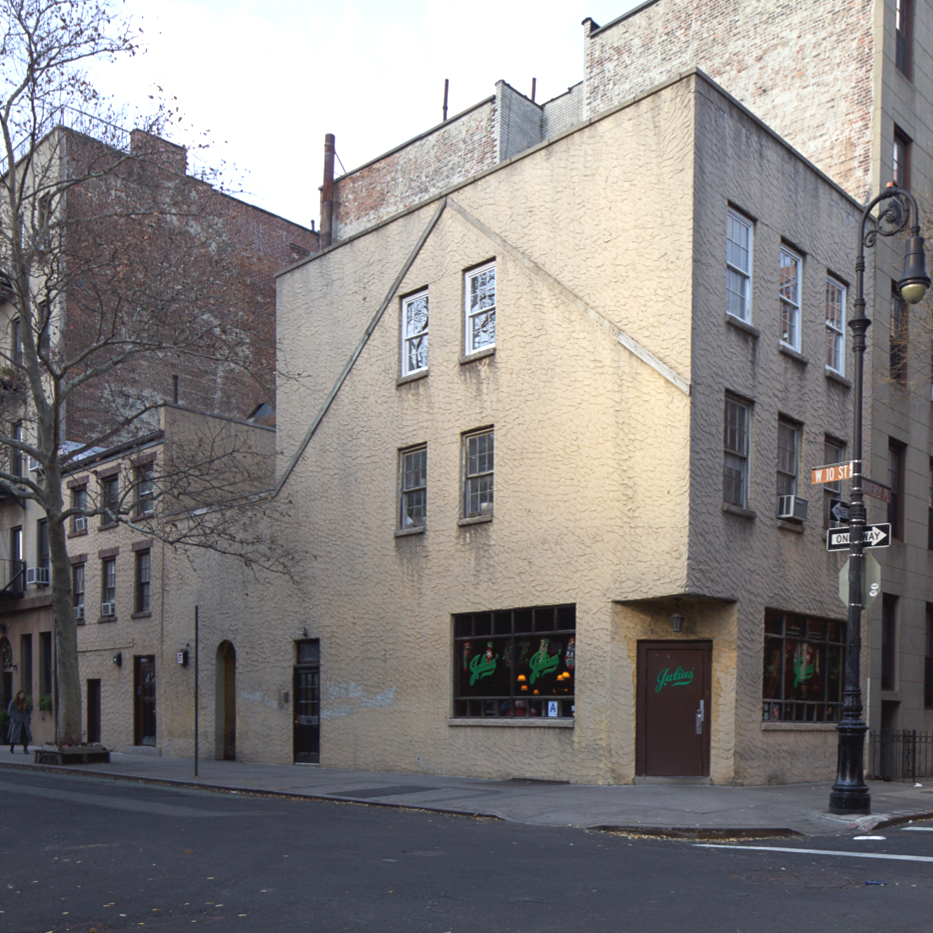 also known at one point as Julius' Bar and Restaurant

On April 21, 1966, a “Sip-In” was organized by members of the Mattachine Society, one of the country’s earliest gay rights organizations, to challenge the State Liquor Authority’s discriminatory policy of revoking the licenses of bars that served known or suspected gay men and lesbians.

The publicized event – at which they were refused service after intentionally revealing they were “homosexuals” – was one of the earliest pre-Stonewall public actions for LGBT rights as well as a big step forward in the eventual development of legitimate LGBT bars in New York City. Before Julius', the Mattachine Society members tried three other locations. First, the Ukrainian-American Village Restaurant at 12 St. Mark's Place in the East Village. Dick Leitsch outside the Ukrainian-American Village Restaurant at 12 St. Mark's Place, April 21, 1966. Gift of The Estate of Fred W. McDarrah. Dick Leitsch, Craig Rodwell, and John Timmons in front of the Ukrainian-American Village Restaurant at 12 St. Mark's Place in the East Village, April 21, 1966. Gift of The Estate of Fred W. McDarrah. The manager (standing) of the Waikiki, 432 Sixth Avenue, speaking to the Mattachine Society members, April 21, 1966. Gift of The Estate of Fred W. McDarrah. (1 of 2) Press release written by Craig Rodwell on April 22, 1966, following the action at Julius'. Courtesy of the Craig Rodwell Papers, The New York Public Library. (2 of 2) Press release written by Craig Rodwell on April 22, 1966, following the action at Julius'. Courtesy of the Craig Rodwell Papers, The New York Public Library. Looking northeast on Seventh Avenue at 10th Street with a painted advertisement for Julius' reading "Around the Corner...Serving Delicious Food," c. 1932. Courtesy of the New York Public Library. Exterior of the building, 1932. Courtesy of Ellen Williams via "Daytonian in Manhattan" blog. There has been a bar on the corner of Waverly Place and West 10th Street since the mid-19th century. The name Julius’ dates from c. 1930 when the bar began to become popular with sports figures and other celebrities. By the 1960s, Julius’ began attracting gay men, although it was not exclusively a gay bar.

On April 21, 1966, members of the Mattachine Society, an early gay rights group, organized what became known as the “Sip-In.” Their intent was to challenge New York State Liquor Authority (SLA) regulations that were promulgated so that bars could not serve drinks to known or suspected gay men or lesbians, since their presence was considered de facto disorderly. The SLA regulations were one of the primary governmental mechanisms of oppression against the gay community because they precluded the right to free assembly. This was particularly important because bars were one of the few places where gay people could meet each other. The Sip-In was part of a larger campaign by more radical members of the Mattachine Society to clarify laws and rules that inhibited the running of gay bars as legitimate, non-mob establishments and to stop the harassment of gay bar patrons.

Dick Leitsch, Craig Rodwell, and John Timmons, accompanied by several reporters, went to a number of bars, announced that they were “homosexuals,” and asked to be served a drink. At their first stop, the Ukrainian-American Village Restaurant, the bar had closed, while at their next two attempts, at a Howard Johnson’s and at the Hawaiian-themed Waikiki, they had been served. They then moved on to Julius’ and were joined by Randy Wicker. However, at Julius’, which had recently been raided, the bartender refused their request. This refusal received publicity in the New York Times and the Village Voice.

…when we walked in, the bartender put glasses in front of us, and we told him that we were gay and we intended to remain orderly, we just wanted service. And he said, hey, you’re gay, I can’t serve you, and he put his hands over the top of the glass, which made wonderful photographs.

The reaction by the State Liquor Authority and the newly empowered New York City Commission on Human Rights resulted in a change in policy and the birth of a more open gay bar culture. Scholars of gay history consider the Sip-In at Julius’ a key event leading to the growth of legitimate gay bars and the development of the bar as the central social space for urban gay men and lesbians.

Landmark Designations for LGBT Significance
In April 2016, through the NYC LGBT Historic Sites Project’s extensive research and writing, Julius’ was listed on the National Register of Historic Places by the U.S. Department of the Interior, following the site’s listing, in December 2015, on the New York State Register of Historic Places. In December 2022, based on recommendations by the Project, the NYC Landmarks Preservation Commission (LPC) designated Julius’ a New York City Landmark. The National Register report, LPC designation report, and Project testimony are available in the “Read More” section below.