In 1970, less than a year after Stonewall, the police raided the Snake Pit bar and detained many people at the local police station.

After one person attempted to escape and was impaled on a fence, the Gay Activists Alliance and Gay Liberation Front quickly assembled a protest march, the results of which demonstrated the strength of the recently formed gay rights organizations and inspired more people to become politically active.

Header Photo
Entrance to the Snake Pit was located in the basement of this corner building. The stairwell and iron railing to the right of the corner storefront led to the bar. Credit: Ken Lustbader/NYC LGBT Historic Sites Project, 2018. 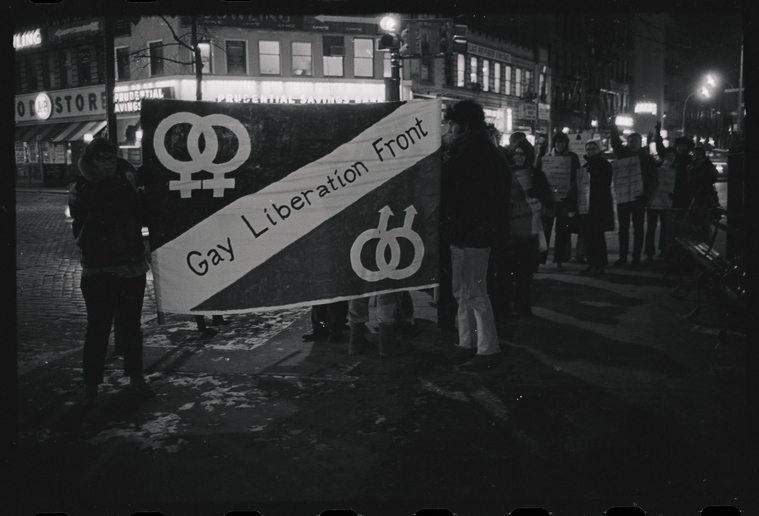 Detail of 215 West 10th Street, showing the stairwell (to the right of the corner storefront) leading to the basement bar space, 1965. The Texas Chili Parlor operates on the ground floor to the right of the apartment building entry. Photo by John Barrington Bayley. Courtesy of the NYC Landmarks Preservation Commission. The building at 215 West 10th Street, showing the stairwell (to the right of the corner storefront) leading to the basement bar space, 1965. The Texas Chili Parlor operates on the ground floor to the right of the apartment building entry. Photo by John Barrington Bayley. Courtesy of the NYC Landmarks Preservation Commission. Stairwell and iron rail that leads to the former basement entrance of the Snake Pit, located to the left of the apartment building entry. Photo by the NYC LGBT Historic Sites Project, 2018. Stairwell to the former basement entrance of the Snake Pit. Photo by the NYC LGBT Historic Sites Project, 2018.

Only eight months after the Stonewall uprising, in the early morning of March 8, 1970, police raided the Snake Pit, a gay-run, non-Mafia, after-hours bar in the basement of a Greenwich Village apartment building (according to Bob Damron’s 1970 Address Book, an annual gay travel guide, the Snake Pit was located below the Texas Chili Parlor). The raid was led by Seymour Pine, who had also led the ill-fated raid on the Stonewall.

Fearing similar rioting from the large crowd of male patrons, the police arrested 167 people, who were taken to the 6th Police Precinct Station House at 135 Charles Street. Argentinian immigrant Diego Vinales, who was only 23 years old and visiting a gay bar for the first time, panicked over the possibility of deportation since his visa had expired, tried to escape from the third story of the jail, and was impaled on the iron fence below. He was cut loose along with part of the fence by firemen, taken to St. Vincent’s Hospital and survived, but word spread that he was dead or dying. A number of arrested men found an empty police office and started making phone calls to Gay Activists Alliance (GAA) leaders and to the press. The Daily News became interested in the story.

GAA organized a quick response, and distributed flyers in Greenwich Village and on the Upper West and Upper East Sides. Joined by the Gay Liberation Front, along with Women’s Liberation, Homosexuals Intransigent!, Homophile Youth Movement, and Yippies, at 9:00 PM that evening, GAA led an angry protest by a crowd numbering around 500 people, who marched from Christopher Park to the police station.

Any way you look at it – that boy was PUSHED. We are ALL being pushed.

A candlelight vigil was also held at St. Vincent’s. All of the disorderly conduct charges were soon dismissed, except for Vinales’ for resisting arrest.

This incident, which received much media coverage, is credited with greatly inspiring more LGBT people to become politically active, including many who had not following Stonewall, such as future film historian Vito Russo, future GAA president Morty Manford, and educator Arnie Kantrowitz. It also demonstrated the strength of the recently formed gay rights movement organizations. The success of the protest is credited with influencing GAA in the direction of planning many political confrontations for gay rights, which became known as “zaps.” Vinales remained hospitalized at St. Vincent’s for three months. Charges against him were dropped by the City in June, but he still faced the U.S. Immigration Bureau. While no one knows what happened to him afterward, journalist Arthur Bell did visit him at his home in New Jersey later that year.