The theater’s historic facade has been demolished. Program for Sarah Bernhardt at the Palace Theater, 1912. Courtesy of the New-York Historical Society. 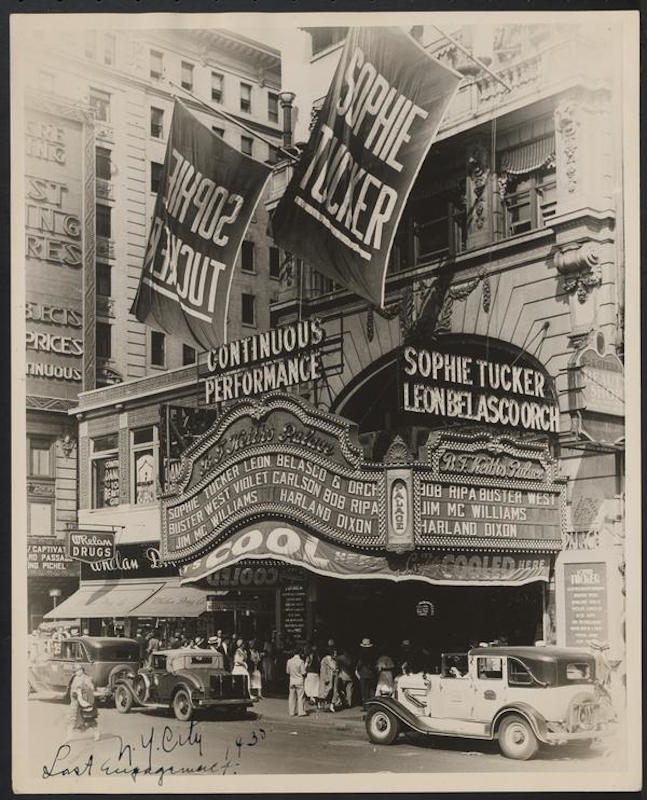 Palace Theater marquee for Sophie Tucker, 1930. Courtesy of the Museum of the City of New York. Joel Grey in George M!, 1968. Photo: Friedman-Abeles. Courtesy of the Museum of the City of New York. Playbill cover for An Evening with Josephine Baker, 1974. Gene Barry and George Hearn in La Cage aux Folles, 1983. Photo: Martha Swope. Courtesy of the Museum of the City of New York. Carol Channing and cast in Lorelei, 1974. Costumes by Bob Mackie and Ray Aghayan. Photo: Martha Swope. Courtesy of the Museum of the City of New York. Keith Carradine and dancers in The Will Rogers Follies, 1991. Source Tams-Witmark. Advertisement for Aida, with music by Elton John, 2000.

The Palace Theater opened as an enormous vaudeville venue in 1913. Over the next two decades it featured such LGBT stars as Sarah Bernhardt, Marie Dressler, Florence Mills, Ethel Waters, Sophie Tucker, and female impersonators Julian Eltinge and Karyl Norman (George Francis Peduzzi). In 1932, it was converted into a movie theater. Gay icon Judy Garland appeared here in concert in 1951-52, wearing gowns designed by Irene Sharaff, and directed by Charles Walters; she performed here again in 1956-57 and 1967.

The Palace was restored and reopened in 1966 as a legitimate theater. Huge LGBT-associated hits here have been:

Other LGBT-associated shows at the Palace have included:

The theater’s historic façade has been demolished. In 2022, the designated landmark interior was elevated in order to create retail space below it.