also known as the Club 181 and the Phoenix Theater

The Louis N. Jaffe Art Theater, a former Yiddish theater, was the location of the Mafia-controlled Club 181 (1945-51), known for its lavish shows of “female impersonators” (a term used at the time) and “drag king” staff, and the pioneering Off-Broadway Phoenix Theater (1953-61). 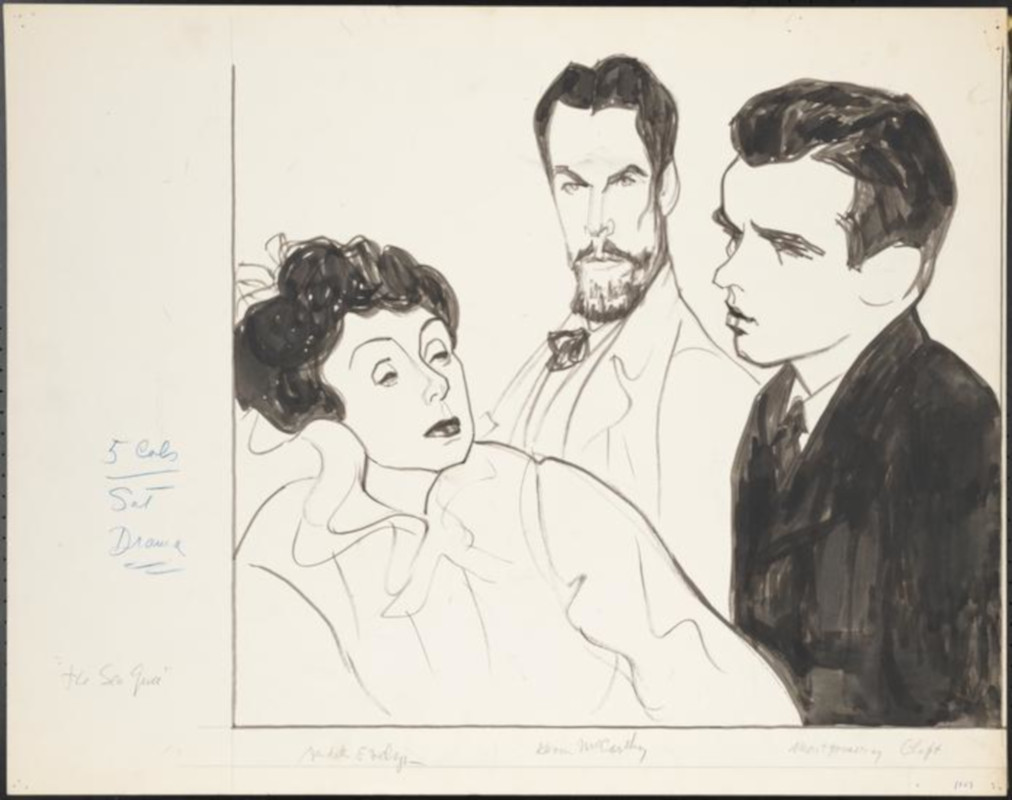 Drawing of The Seagull cast, 1954, by William Auerbach-Levy. Montgomery Clift is on the right. Courtesy of the Museum of the City of New York. Rendering of the Louis N. Jaffe Art Theater by Anthony F. Dumas, 1928. Courtesy of the Museum of the City of New York.

The Louis N. Jaffe Art Theater is the single most tangible reminder of the heyday of Yiddish theater in 20th-century New York, when venues of this kind lined lower Second Avenue. Except for a few years when it operated as a movie theater, the building was used continuously as a Yiddish theater from its opening in 1926 until 1945.

Club 181
From 1945 to 1951, this was the popular Mafia-controlled Club 181, called “the homosexual Copacabana” as it was one of the most luxurious clubs in the U.S. that featured lavish shows of “female impersonators” (a term used at the time) and “drag king” wait staff and performers. Three shows performed nightly were produced by Neil Stone and “conceived, staged, and directed” by Broadway dancer (and later Tony Award-winning choreographer for stage, as well as film and TV) Danny Daniels. Live music was provided by the orchestra of prolific Broadway conductor and musical director Al Goodman. Among notable performers at Club 181 were “Kitt Russell” (Russell Paull), later the director of the Club 82 Revue, who got his start here in 1948; drag kings Buddy Kent, Gail Williams, and Blackie Dennis; and lesbian stripper Toni Bennett.

It was called “the most famous fag joint in town” by Jack Lait and Lee Mortimer in their homophobic book U.S.A. Confidential in 1952.

[The 181 Club had] waiters who were butch lesbians in tuxedos. … Like the bars of the 1920s, it drew many heterosexuals who came to gawk or to dabble, but many more men and women who were committed to homosexuality and who came to be with other homosexuals.

Club 181 was opened by the family of the infamous Mafia boss Vito Genovese, who was one of the bigger Mafia club operators in Greenwich Village starting in the 1930s. Anna Genovese (1905-1982), Vito’s bisexual wife, ran it with her brothers Pete and Fred Petillo, and Genovese frontman/manager Stephen Franse. Anna had started out in clubs as the proprietor of Club Caravan, 578 West Broadway (demolished) in 1939, taking over many of her husband’s business interests when he left New York City for exile in Italy in 1937 to avoid arrest for a murder and other crimes. She lived at 29 Washington Square West, above Eleanor Roosevelt.

The club, however, lost its liquor license through an action of the New York State Liquor Authority (SLA) in April 1951. For five nights – December 15 through 19, 1950 – the club, its performers, staff, and patrons were surveilled by undercover police. The club was then cited for nine violations, including the sale of alcohol after hours; staff allegedly inducing patrons to buy alcohol; the club permitting an “indecent” act by a patron; the presence of “homosexuals,” lesbians, and other “undesirables;” and the club put on “obscene, indecent” performances and exhibitions. In its report, the New York Daily News called the club “a hangout for perverts of both sexes.”

Club 181 was extremely profitable, with a substantially straight outer borough and tourist crowd, and receipts for 1950 were reported as $480,000. The Mafia, through the 181 Restaurant Corp., with Stephen Franse as president, contested the revocation of its license. The case was heard in New York Supreme Court on March 28 and April 11, 1951. The counsel for the SLA stated “the operation of this club constituted an affront to the community and a danger to the morals of the citizenry,” and much of the police testimony centered on the non-gender-conforming dress and behavior of the performers, staff, and patrons. Franse was forced to deny any knowledge that gay men or lesbians frequented the club or were employed there. Interestingly, the club attempted to challenge the SLA’s use of the term “disorderly” (in Section 106 of its law) to revoke the licenses of places with an LGBT clientele, since it was so vague and the Legislature had never defined it. Club 181’s license was officially revoked on April 27, then it was stayed until review by the court’s Appellate Division, which denied the appeal on June 6. The New York State Court of Appeals affirmed the earlier decision on July 11, and the club’s final appeal to the U.S. Supreme Court was denied.

Phoenix Theater
The building was particularly renowned from 1953 to 1961 as the pioneering Off-Broadway Phoenix Theater. One of the most important, prolific, and creative companies of the time (also named the Phoenix Theater), it was founded by Norris Houghton, who had experience in theater design and direction, and T. Edward Hambleton, descendant of a wealthy Maryland banking family who had theater management/production experience. Houghton became the artistic director and Hambleton the manager. Formed initially as a limited partnership company, its partners included such theatrical luminaries as playwright William Inge. The Phoenix was planned as an “art theater”/repertory company that would be freed from the restrictions, both artistic and economic, of the Broadway stage.

The theater opened in December 1953. Over the course of eight full seasons in this house, the Phoenix Theater presented an impressive array of American and European theatrical talent, from both the stage and motion pictures. Despite the company’s emphasis on established actors, it also formed a reputation for assisting the careers of talented newcomers.

Later in this building, as the Entermedia Theater, was the original production of The Best Little Whorehouse in Texas (1978; transferred to the 46th Street Theater), directed by Peter Masterson and Tommy Tune, with musical numbers staged by Tune, and Thommie Walsh as associate choreographer.