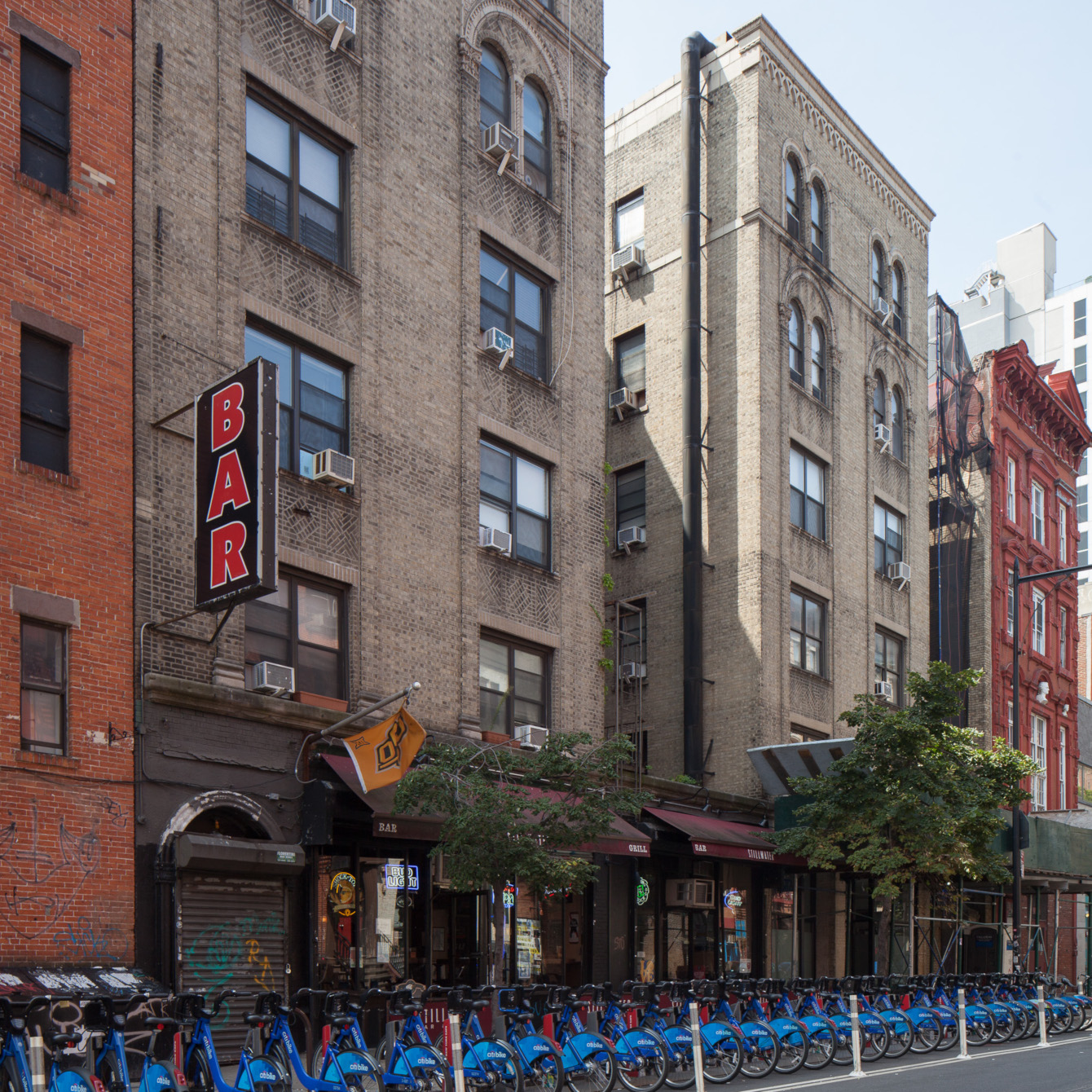 From 1953 to 1973, the basement of this building was home to Club 82, one of the most prominent American clubs for “female impersonators” (as they were then called) of the day.

Anna Genovese, who was bisexual, was the boss and hostess of the club, which was a hotspot for a mostly straight clientele, but also attracted LGBT celebrities such as Liberace, Tennessee Williams, and Burt Lancaster. 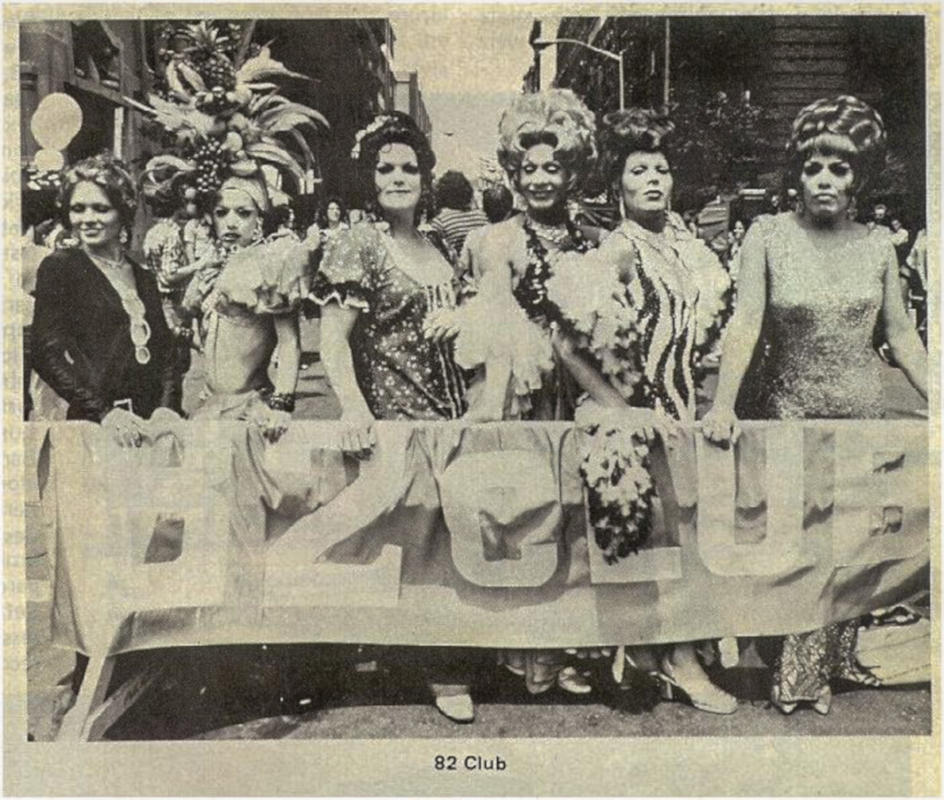 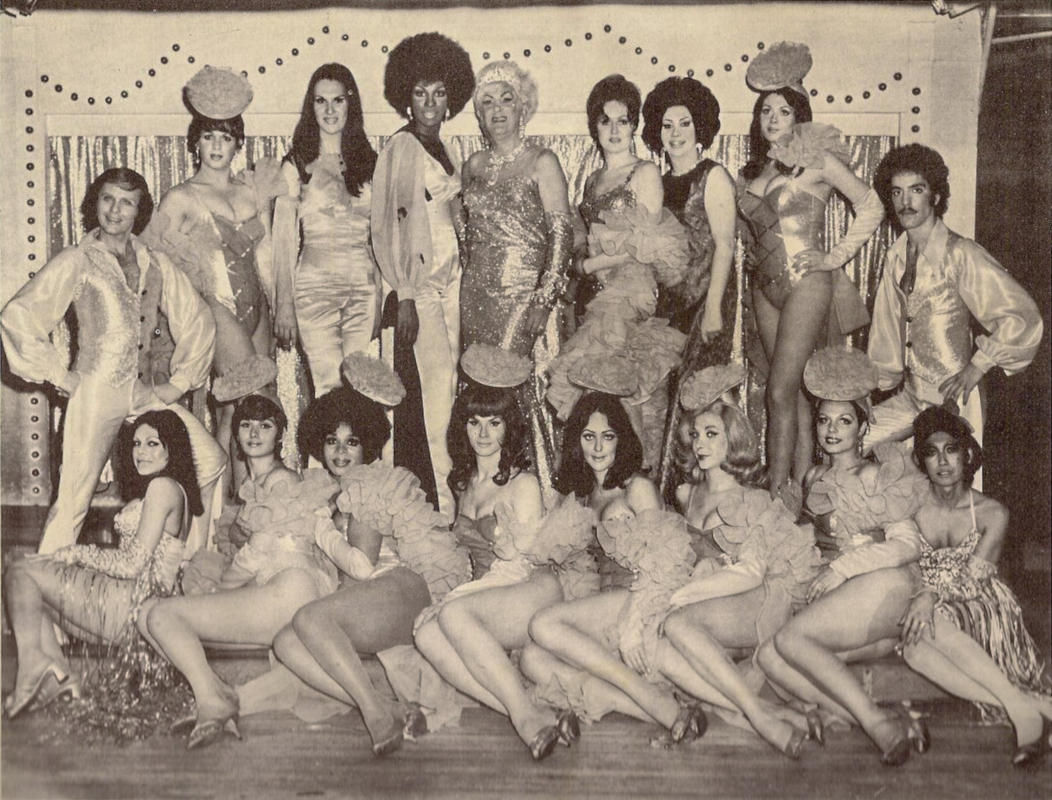 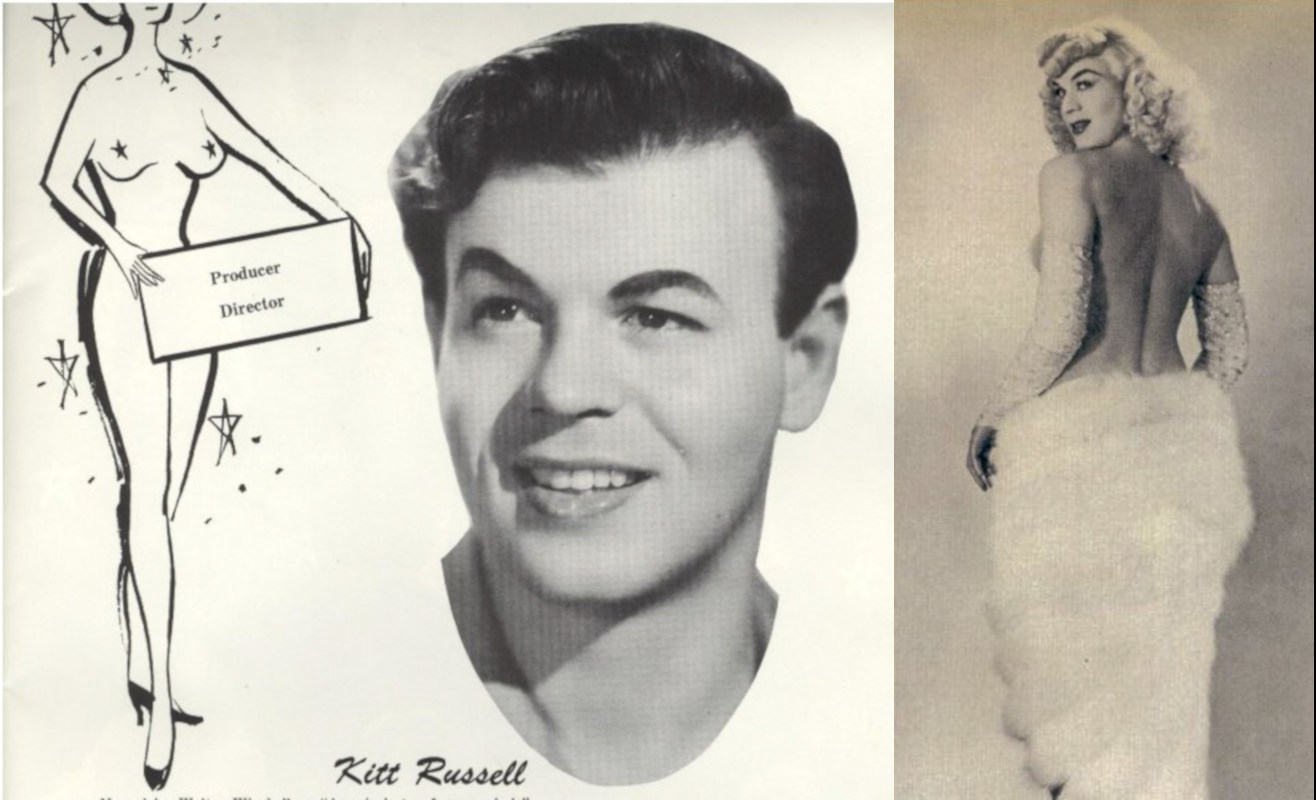 A club has always existed (until recently) in the basement of the Majestic Apartments building in the East Village, with an entrance on East 4th Street near Second Avenue. It began as the Rainbow Inn (by 1929), a speakeasy that was sometimes raided. It later featured “girlie revues” and live music, as evidenced in advertisements and Billboard periodical listings from 1942 to 1951. Young future photographer and filmmaker of Pink Narcissus fame James Bidgood worked here. The Rainbow Inn may have included some drag performers in the early 1950s.

Perhaps its most famous phase, from 1953 to 1973, was as the Club 82 (also called the 82 Club), one of the most prominent American clubs for “female impersonators” (as they were then called) of the day. It was opened by the family of the infamous Mafia boss Vito Genovese, who was one of the bigger Mafia club operators in Greenwich Village starting in the 1930s. Anna Genovese (1905-1982), Vito’s wife, was the boss and hostess of the club, which she ran with her brother Pete Petillo and his wife, and Genovese frontman/manager Stephen Franse.

A restaurant, bar, and entertainment venue, Club 82 was entered down a long flight of stairs. It was arranged with tables and banquettes around a stage, and decorated with fake palm trees and mirrored columns. Lavish drag show performances with large casts were given three times a night – at 10:30, 12:30, and 2:30 – a rare instance of a club having a late night liquor license. The Club 82 Revue was directed by “Kitt Russell“(Russell Paull). Set to live music, the revues had high production values with lavish costumes by Johnny Wong and complex choreography by Bob Lake — shows could cost up to $25,000. The shows played for a full year. Among noted performers were Russell, Bidgood as “Terry Howe,” Ty Bennett, “Adrian” (Henry Arango), Jackie Maye, and International Chrysis. Between the big production numbers were specialty drag acts that might include strippers, singers, dancers, and comedians. The large wait staff were “drag kings.” The club’s longtime staff included butch lesbian bouncer Tommy and bartender Butchie.

The club was quite popular with a mostly straight clientele, including New Yorkers and tourists, but also many celebrities, such as Liberace, Tennessee Williams, and Burt Lancaster. It was advertised as “New York’s Most Unique Night Spot” and also “East Side’s Gayest Rendezvous.” Future drag performer Harvey Fierstein started coming here in his early teens, and Diane Arbus photographed performers here after 1958.

Anna Genovese remained as hostess and boss here until the late 1960s. Bisexual, she had affairs with some of her female staff and performers, including a longtime relationship with one named Jackie (“Duke”). Anna had started out in clubs as the proprietor of Club Caravan, 578 West Broadway (demolished) in 1939, taking over many of her husband’s business interests when he left New York City for exile in Italy in 1937 to avoid arrest for a murder and other crimes. She lived at 29 Washington Square West, above Eleanor Roosevelt. From 1945 to 1951, Anna operated the Club 181, in the downstairs of the Louis N. Jaffe Theater Building at 181 Second Avenue, with her brothers Pete and Fred Petillo, and Franse. Club 181, a lavish and popular spot called “the homosexual Copacabana,” featured shows with “female impersonators” and “drag king” waiters in tuxedos. It lost its liquor license in April 1951 through an action of the New York State Liquor Authority, which deemed it a hangout for “perverts.” Its operation was basically transferred to Club 82 in 1953. Anna, however, filed for divorce that year and shockingly testified in court about her husband’s numerous activities. Franse, who had been assigned the duty of keeping her “in line,” was ordered to be murdered by Vito Genovese in June 1953. Genovese was later convicted on narcotics charges in 1959.

Club 82, in its notable female impersonators and drag kings phase, began to lose its appeal and clientele after the Stonewall uprising in 1969 and resulting changes in the gay community. Russell left the club sometime after 1971, and the club started to decline. The neighborhood, considered seedy, attracted fewer traditional tourists. Briefly, around 1974 to 1976, Club 82 was one of New York’s leading rock clubs and a central venue for the glam rock scene, hosting performers like Wayne County (later Jayne County) and Lou Reed, and visits by the likes of David Bowie. The club had turns as a cabaret, disco, strip club, and in 1984 as the “New Club 82” with drag acts again. In the 1990s, as the Bijou Theater or Bijou 82, it became a gay porn theater and backroom club. It closed in 2019.