Referred to as the “Vatican of Disco,” The Saint was a gay, members-only club located in the East Village that operated between September 1980 and May 1988.

With its huge planetarium-style dome above the dance floor, legendary sound system, and massive light shows, it is considered by many to have been New York’s most spectacular dance club and one of the most expensive gay business investments ever attempted. Invitation to the first party, c. 1980. Source: "Letting Loose and Fighting Back" exhibition at the New-York Historical Society (object on loan from the Stonewall Foundation; photo taken by NYC LGBT Historic Sites Project). Screenshot of Bruce Mailman being interviewed on the dance floor at The Saint, c. 1988. Source: "Robert Mapplethorpe," Arena (1988), documentary by Nigel Finch (BBC). 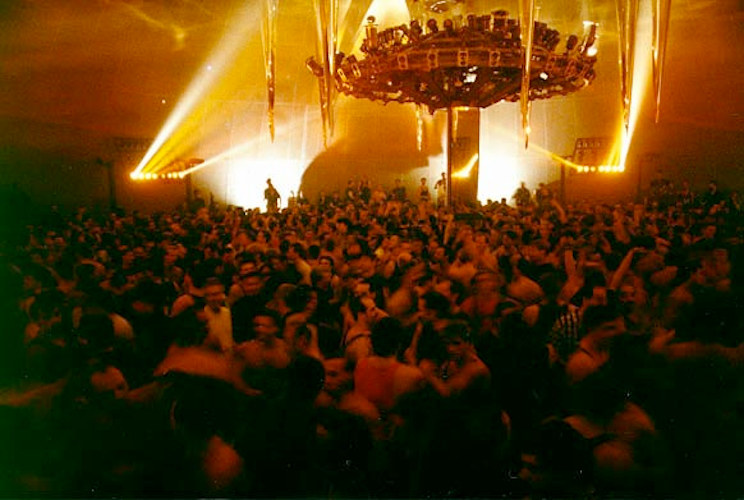 Under the dome, date unknown. Source: The Saint At Large, retrieved from website. 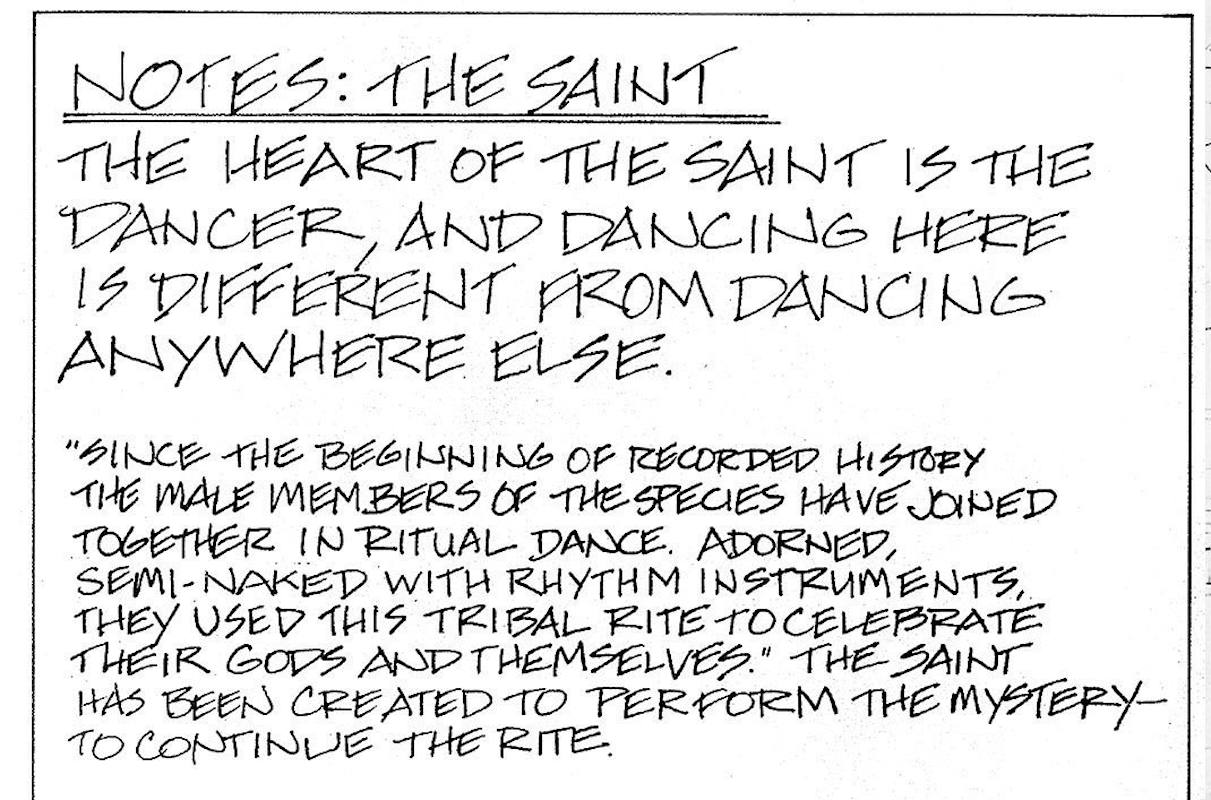 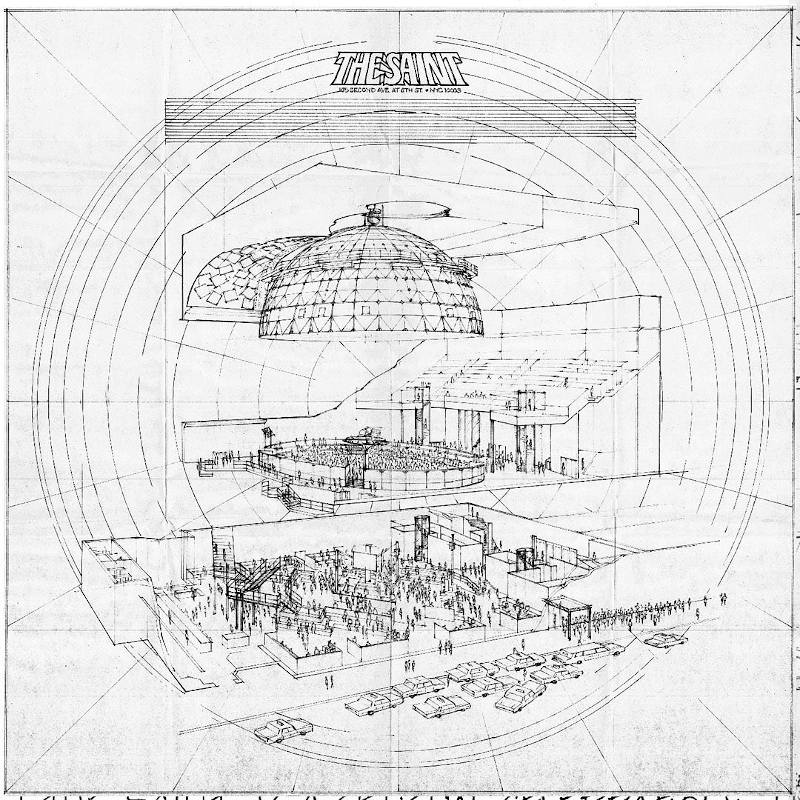 Perspective of interior from promotional poster, c. 1980. Source: The Saint At Large, retrieved from Facebook page. Detail of façade from promotional poster, c. 1980. Source: The Saint At Large, retrieved from Facebook page. Poster for The Saint’s first Black Party with photography by Robert Mapplethorpe, 1981. Source: The Saint Foundation, retrieved from website. 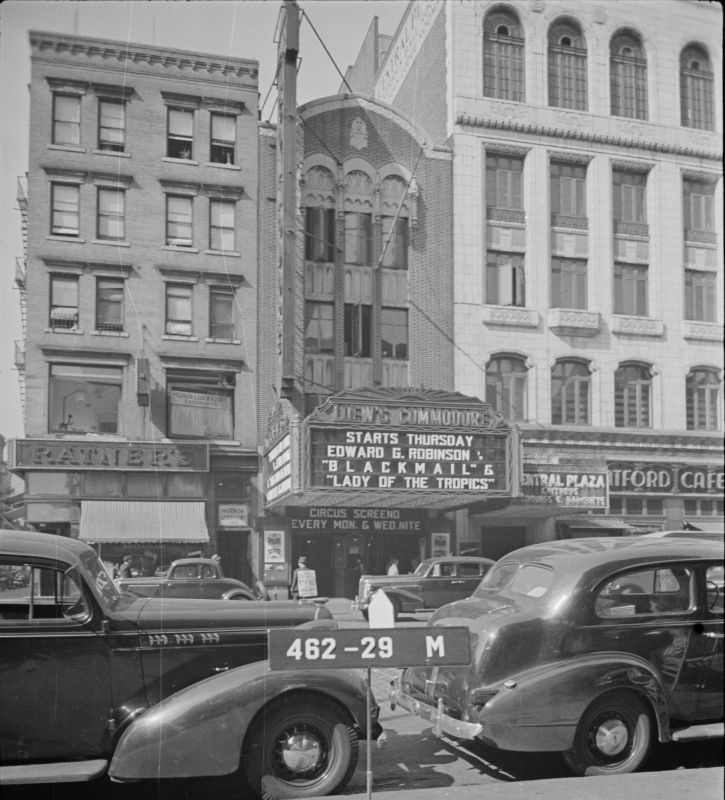 Opened in 1926 as a cinema called the Commodore Theater, the building became the Village Theater in 1963, offering burlesque, Yiddish vaudeville, Off-Broadway productions, and live music events. From 1968 to 1971, the space was home to the legendary Fillmore East Music Hall (often referred to as the Fillmore East), which was considered the best showcase for rock music in New York City.

The space had been vacant for a number of years, when, in the late 1970s, entrepreneur Bruce Mailman partnered with designer Charles Terrel to develop and create The Saint. Mailman purchased the abandoned proscenium theater because it could accommodate his vision of a multi-level extravagant club, including a planetarium, which became The Saint’s trademark. Soon after opening, The Saint became the apotheosis of the underground dance world in New York City, its name, inspired in part, from the nearby New St. Marks Baths, also owned by Mailman.

Working from Mailman’s vision, Terrel designed a futuristic, elevated, 4,800-square-foot circular dance floor topped by an aluminum domed ceiling that served as a theatrical scrim hiding nearly 500 speakers. A star projector, known as “the tree of light,” rose from the center with about 1,500 fixtures to create various light shows, including scenes of a nighttime sky, sunrise, or the cosmos. Overhead was a hatch that would lower a mirrored ball. The dance floor was located on an independent table with its own support system that was set twenty feet into the ground on rubber pads to soften the surface for dancing. Above the dome was the original balcony. Mailman intended it to be a viewing deck to look down upon the dance floor, but, instead, it became a main area for sexual activity. Construction costs totaled $4.6 million in comparison to the $400,000 cost to open Studio 54 in 1977. The club’s architectural drawings often appeared in media coverage and came to symbolize The Saint as a visionary space. A 1981 issue of After Dark, an entertainment magazine aimed at a gay audience, referred to it as the “Vatican of Disco.”

[We] wanted to create a class operation, a magical environment that could provide gay men with a sense of security, a safe alternative. I think it was the best of what it was, though it had cost us $4.6 million by our opening day.

Mel Cheren, owner of the Paradise Garage, described the patrons’ reactions to the space on opening night, September 20, 1980, “When the boys poured in, you could actually hear the gasps of astonishment above the pounding music.” For its first several years, the club, which did not serve alcohol, was male-only and open only on Saturday and Sunday nights from Labor Day weekend to mid-June. An average of 4,000 men attended the club each night, catering to a mostly white crowd, many who frequented Fire Island in the summer, and who could afford the expensive annual membership fees. The Saint’s bylaws expressly focused on creating an all-male space: “Under no circumstances will women guests of male members be permitted in the club on Saturday Nights.”

The AIDS epidemic impacted attendance and, by the mid-1980s, management changed the male-only policy and allowed women and straight patrons. During this period, showing the alarming effect of the epidemic on gay men, 700 membership renewals came back with “Return to Sender.” (Mailman would later die of complications from AIDS in 1994.)

For The Saint’s closing event, which started Saturday, April 30, 1988, and concluded Monday, May 2, at noon, Mailman assembled many of its most popular DJs who played over 40 hours of continuous music with seven live acts. As a club, The Saint pushed the limits on the experience and architecture of the discotheque, and its design created an environment for gay men to live openly and find a sense of community.

Entry by Ken Lustbader, project director (December 2019), with some portions adapted from text in Liam Nolan, “From the Church of Disco to Waterfront Ruins: An Analysis of Gay Space” (see below).