Robert Indiana, a pioneering Pop artist whose gay identity was often obliquely expressed in his paintings, sculptures, and prints, lived and worked on all five floors of the former industrial building at 2 Spring Street, on the corner of the Bowery, from 1965 until 1978.

Indiana is best known for using words, most prominently “love,” as the subject of his boldly-colored work. Robert Indiana with stencils in his Coenties Slip studio, 1963. Photo by William John Kennedy. Collection of the Indianapolis Museum of Art. "The Triumph of Tira" (1960-61). Collection of the Sheldon Museum of Art, University of Nebraska-Lincoln. Source: "Robert Indiana: Beyond Love" by Barbara Haskell. Robert Indiana and Andy Warhol at the opening of "Americans 1963" at the Museum of Modern Art, May 1963. Photo by William m John Kennedy. Collection of the Indianapolis Museum of Art. "The Demuth American Dream #5," (1963), based on Charles Demuth's painting "I Saw the Figure F5 in Gold" (1928) in the collection of the Metropolitan Museum of Art. Source: "Robert Indiana: Beyond Love" by Barbara Haskell. Robert Indiana at his second solo exhibit at the Stable Gallery, May 13, 1964. Courtesy of the Estate of Fred W. McDarrah. "LOVE" (1966). Collection of the Indianapolis Museum of Art. Source: "Robert Indiana: Beyond Love" by Barbara Haskell. 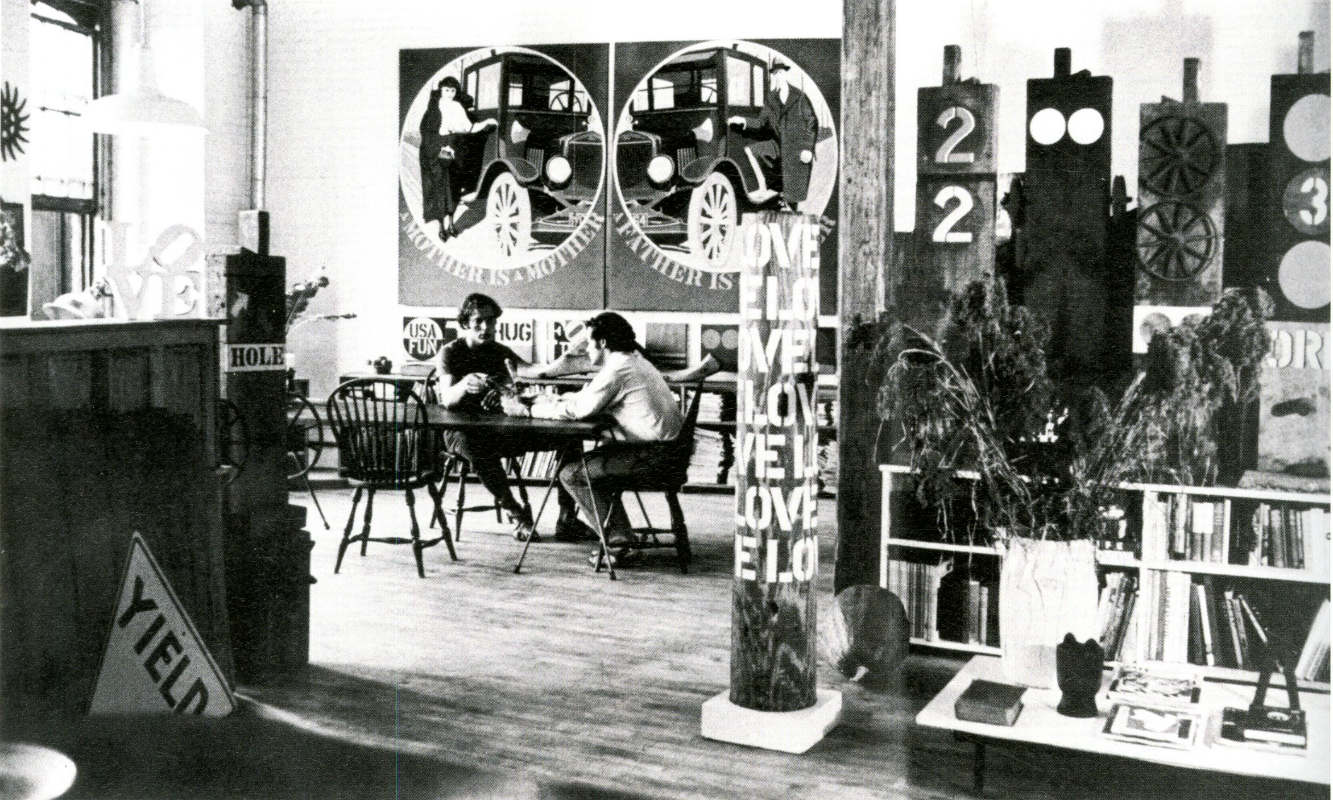 "KvF I (Hartley Elegy)" (1989-94), based on Marsden Hartley's "Portrait of a German Officer" (1914), an abstracted portrait of his German lover, killed in World War I (Metropolitan Museum of Art), private collection. Source: "Robert Indiana: Beyond Love" by Barbara Haskell.

The artist known as Robert Indiana (1928-2018) was born Robert Clark into a poor family in Indiana. After serving in the army and studying at the Chicago Art Institute, he moved to New York City in 1954 to pursue a career as an artist. While working at an art supply store on 57th Street he met Ellsworth Kelly. The artists soon rented neighboring studios on Coenties Slip in Lower Manhattan and also became lovers. They were part of a vital community of young artists centered in the early 19th-century counting houses of Coenties Slip that also included Agnes Martin and Cy Twombly. In 1957, Clark changed his name to Robert Indiana, in response, he said, to a “desire to have something unique and a name that was original and exclusive to my own use.”

Much of Indiana’s artwork is autobiographical in some way, but the meaning is not always obvious. Art historian Robert Storr notes that to be an openly gay man in the 1950s and ’60s was practically impossible without donning a series of guises.

Indiana never hid himself completely behind masks; rather, he was using them as filters so that the things that were important to him could come through. They would come through very clearly to people who understood and were sympathetic to his concerns.

Among his earliest paintings are abstracted gingko leaves painted in pairs connected at their stems (c. 1957). In her seminal catalogue for the Whitney Museum’s 2013 Indiana retrospective, curator Barbara Haskell writes that these “contained private, coded meanings having to do with identity and partnership,” as Indiana associated the gingko with Kelly and their relationship. In 1960, Indiana created a series of sculptures constructed of wood and other objects found near his studio. Many of them, including Zig, have protruding round tenons that give the works a sexual connotation; he referred to them as “phallic sentinels.”

On several of the constructions, Indiana introduced words created from 19th-century stencils. Soon words, generally painted in vivid colors, became the subject of his work. These word paintings, including some that use short simple words such as “eat” and “die” and others relating to earlier American art and literature (including the work of gay artists such as Charles Demuth, Marsden Hartley, Walt Whitman, and Hart Crane), can also be interpreted on multiple levels. For example, The Triumph of Tira, which places the words, “CAT,” “SEX,” “LAW,” and “MEN” within complex, stridently-colored, patterns of circles, squares, and stars addresses, what Haskell notes, are the “paradoxes and volatility of intimacy and sexuality . . . referencing the perils of homosexuality in an age when sodomy was illegal,” but also relates to the Mae West character, Tira, in the 1933 film I’m No Angel (West has long been a gay icon).

In 1964, architect Philip Johnson commissioned Indiana to provide one of the ten works of art for the exterior rotunda of the Theaterama at the New York State Pavilion at the 1964-65 New York World’s Fair (other artists included Andy Warhol, Ellsworth Kelly, and Robert Rauschenberg). Indiana designed a lit sign that read EAT (it had to be turned off after one day because fair visitors thought it was an advertisement for a restaurant).

Indiana’s most famous work is the iconic LOVE with the letters set on two levels with the O canted in a dynamic manner. Indiana created paintings, sculptures (including one on the corner of Sixth Avenue and West 55th Street), prints, Christmas cards, and a postage stamp with the LOVE image and it has been pirated numerous times to become one of the most ubiquitous art images from the 20th century. LOVE can be read as a simple statement about relationships, or can have a more layered interpretation. While Barbara Haskell sees its roots in a request for a Christmas card design from the Museum of Modern Art, art historian Susan Ryan traces the design to a letter arrangement for the word “fuck,” and relates this to the breakup of Indiana’s relationship with Kelly. But even in its more benign “love” garb, the canted “o” creates a sense of instability in the work that adds complexity to its meaning.

In 1965, Indiana left Coenties Slip and rented space in the former industrial building at the corner of Spring Street and the Bowery, then a seriously depressed neighborhood, eventually taking over the entire structure, with separate floors for painting, drawing, sculpture, printmaking, and living. Here, he continued to create work based on words set in fields of color. In 1975 his lease expired, but he remained in the building until forced out in 1978, at which time he moved to Vinalhaven Island, Maine.