Jasper Johns, who had his home and studio in this building from 1967 to 1987, was famed for his paintings of targets, flags, numbers, and other vernacular forms, and is among the great American artists who came to maturity in the 1950s and 1960s.

Although an intensely private person, Johns has been part of a gay artistic milieu since entering into a relationship with artist Robert Rauschenberg in 1954, and working closely with choreographer Merce Cunningham and composer John Cage. Jasper Johns (b. 1930) is one of the most important American artists of the later decades of the 20th century and first decades of the 21st century. Johns’s most iconic paintings, sculptures, and prints are based on features of vernacular popular culture, such as maps, targets, numbers, letters, and body parts, that are presented with unusual surface textures that change the visual quality of the original object.

Johns was born in Georgia and grew up in South Carolina. Following a brief stint at the Parsons School of Design and service in the army during the Korean War, Johns settled in New York. In 1954, he met artist Robert Rauschenberg, with whom he had an intense personal and artistic relationship that lasted until 1961. Johns moved into a studio on Pearl Street (demolished) in 1954, with Rauschenberg soon joining him in a studio downstairs. Through Rauschenberg, Johns met a group of other gay artists, including Cy Twombly (Rauschenberg’s former lover), sculptor Richard Lippold, choreographer Paul Taylor, composer Lou Harrison, and, most importantly, choreographer Merce Cunningham and composer John Cage, with whom he would collaborate through much of their careers. In 1958, dealer Leo Castelli was visiting Rauschenberg’s studio when he was introduced to Johns. He was so impressed that he gave Johns his first gallery show, from which the Museum of Modern Art acquired several works, including the iconic Flag (1954-55). According to Johns:

One night I dreamed that I painted a large American flag, and the next morning I got up and I went out and bought the materials to begin it.

Johns applied strips of newspaper to a canvas that was mounted on plywood and then painted with encaustics. The wax in the encaustic paint created a tactile surface. A critic of the time encapsulated this painting’s ambivalence, asking, “Is this a flag or a painting?”

In 1967, Johns purchased the former Provident Loan Society of New York branch on the corner of East Houston and Essex Streets. The Provident Loan Society was a philanthropic venture that provided loans on valuables as an alternative to private pawn brokers. Their branches, including the one purchased by Johns, were designed to resemble banks. With this purchase, Johns moved from an apartment at 340 Riverside Drive, which he sold to writer Susan Sontag. After a brief stint at the Chelsea Hotel during studio renovations, Johns moved to East Houston Street in 1968. He retained ownership until 1987, although by the mid-1970s he only painted here occasionally, as he maintained studios in Stony Point, New York and the Caribbean island of St. Martin. At Houston Street, Johns worked on many important paintings, notably the 22 pieces of Map (Based on Buckminster Fuller’s Dymaxion Airocean World) of 1967-71, now at the Museum Ludwig, Cologne, and Scent (1973; Ludwig Forum für Kunst, Aachen), his first work consisting entirely of cross hatching.

Johns is an intensely private person and has always denied that his paintings are autobiographical.

It is not so much that Johns wishes to be left alone, Greta Garbo-style, but simply that he is alone. . . .Wounded in love . . . in particular by his rupture with Robert Rauschenberg in the early 1960s, he has sublimated his suffering and structured his existence around what he does by himself: his art.

This desire for privacy has been especially true of his homosexuality, dating back to the 1950s when public knowledge of what was then considered sexual deviancy could sidetrack a career. However, as several critics have written, gay subtext is evident in a number of his paintings, most notably in Target with Plaster Casts (1955, David Geffen Collection), which features molded body parts, including a penis, set within boxes (or closets) that could be closed for concealment.

The Jasper Johns Residence and Studio Building is endangered; there is a proposal to gut the interior and build a twelve-story apartment building above the surviving walls, using motifs from Johns’ work as ornament on the facade. 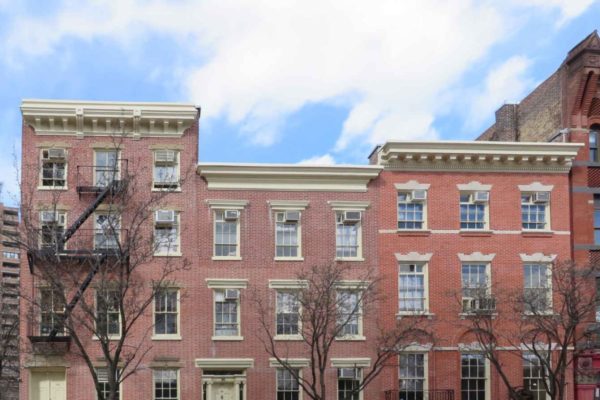