From 1958 to 1961, author and civil rights activist James Baldwin rented an apartment in this building, where he continued work on his third novel, Another Country (1962), which included bisexual characters.

His influence as a novelist and as the most significant chronicler of the civil rights movement contributed to his fame, leading to a constant presence of fans outside the building. First edition cover of Another Country (1962) by James Baldwin. c. 1939 tax photo of 81 Horatio Street, which is what the building looked like during Baldwin's tenancy. People entered through the basement entrance. Photo by the NYC Department of Taxes. Courtesy of the NYC Municipal Archives. Author and civil rights activist James Baldwin (1924-1987), born and raised in Harlem, moved to Greenwich Village in 1943. He first stayed with modernist painter Beauford Delaney at his 181 Greene Street apartment/studio (demolished). Delaney, who may have also been one of Baldwin’s earliest lovers, mentored Baldwin, providing him entree into rarefied circles and exposing him to jazz and art. Baldwin later noted that Delaney was “…the first living proof, for me, that a black man could be an artist. In a warmer time, a less blasphemous place, he would have been recognized as my Master and I as his Pupil. He became, for me, an example of courage and integrity, humility and passion.”

Delaney ultimately introduced Baldwin to Connie Williams, the Trinidad-born owner of Calypso, a small restaurant at 146 MacDougal Street (demolished), located a block south of Washington Square Park. There, Baldwin worked as a waiter and also came into contact with a racially diverse group of bohemians, artists, and political radicals. Baldwin also frequented such Village mainstays as the San Remo Cafe, Minetta Tavern, Joe’s Diner, and the White Horse Tavern. As a Black man, he often dealt with racial discrimination in these places, particularly the San Remo, and later wrote about these experiences.

In November 1948, Baldwin left for Paris to escape the racism he endured in New York City. He would spend much of the rest of his life in France, with sojourns in other places, such as Istanbul and Los Angeles, but also frequently returned to New York. He lived in a few places in the Village, including a small apartment on Gay Street in 1955 with the Swiss painter Lucien Happersberger, whom he met in Paris. In 1958, Baldwin rented an apartment at 81 Horatio Street, where, he noted, there were “a couple of Negroes in the building already.” At the time of Baldwin’s tenancy, the building, originally a single-family rowhouse, had already been altered to a multi-unit building. As a result, its stoop was removed and the main entrance was moved to the ground floor, which is where Baldwin entered (in 2003, the stoop entrance was reconstructed after the building was converted back to a single-family home).

On Horatio Street, Baldwin continued work on his third novel, Another Country (1962), which he had begun in 1948 (Happersberger served as partial inspiration for the character Yves). The book, set in late 1950s Greenwich Village, included bisexual themes – which he first introduced in his groundbreaking novel, Giovanni’s Room (1956) – and interracial relationships. Baldwin’s success as a writer and growing influence as a chronicler of and activist in the civil rights movement, brought him fame. As a result, fans became a constant presence outside the apartment and he eventually left it in 1961. In February 1965, he bought the building at 137 West 71st Street on the Upper West Side, which became his primary residence for the rest of his life. 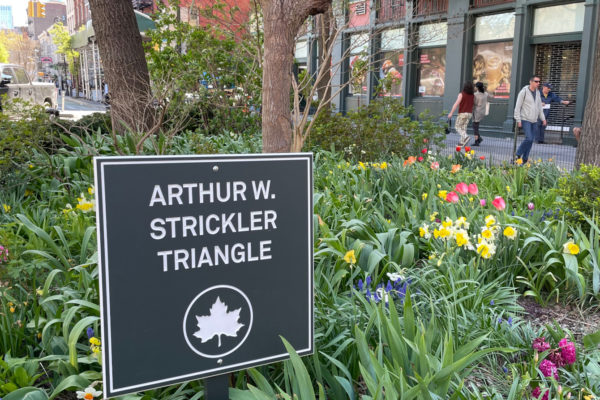