Future LGBT rights icon Harvey Milk lived with his boyfriend Joe Campbell in an apartment in this building across the street from Central Park from 1958 to 1962, with Milk living here until 1963.

After their six-year relationship ended, Campbell became part of the Warhol crowd and Milk would ultimately go on to become the first openly gay person to be elected to office in California, in 1977. 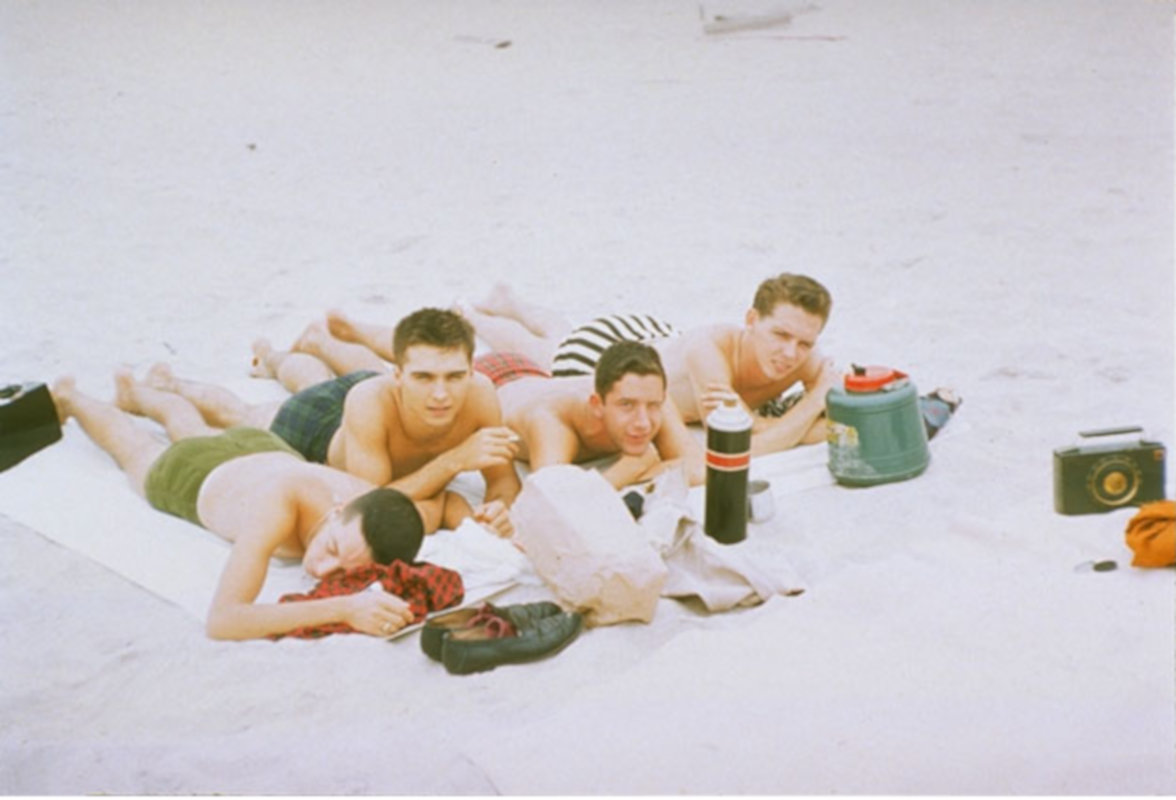 Joe Campbell in what appears to be his and Harvey Milk’s apartment at 360 Central Park West, late 1950s. Photo by Harvey Milk. Source: queer-arts.org. Harvey Milk (1930-1978) was born in Woodmere, New York, to Lithuanian Jewish parents and frequented New York City to watch opera from a young age. According to biographer Randy Shilts in The Mayor of Castro Street, Milk was leading an active gay life by age 14. In August 1947, before his freshman year at New York State College for Teachers (now State University of New York), in Albany, he was arrested for cruising in Central Park. After graduation in 1951, Milk joined the Navy. However, he was forced to resign four years later and was given an “other than honorable” discharge because he was gay (until the Bay Area Reporter obtained his naval records in 2020, it was widely assumed that Milk had been honorably discharged).

In the summer of 1956, Milk rented an apartment in Rego Park, Queens, and worked as a high school teacher on Long Island. That July, he met Joe Campbell (1936-2005) at Riis Park Beach. A few weeks later, Campbell moved into Milk’s apartment and they began a six-year relationship. Shilts notes that “They quickly settled into a safe middle-class marriage. Harvey accepted nothing short of complete monogamy. Their outings were to the opera, ballet, and museums–not gay bars.” In 1958, Milk and Campbell rented an apartment at 360 Central Park West, with Milk then working for an insurance company and Campbell gilding furniture. Shilts writes that Campbell “decorated the apartment in late-fifties splendor.” Although they acted as a couple in public, Milk remained closeted and was politically conservative (he later worked on Barry Goldwater’s 1964 presidential campaign).

Campbell moved out after their relationship ended in late 1962. He joined the Andy Warhol crowd and played the Sugar Plum Fairy in Warhol’s film, My Hustler (1965), a character later referenced in Lou Reed’s 1972 song “Walk on the Wild Side.” (He moved to the San Francisco Bay Area around 1968 and eventually lived with Stanley Jensen, his partner of 24 years, until Campbell’s death in 2005.)

Shortly after the break-up with Campbell, Milk met the young future gay rights activist Craig Rodwell while cruising on Central Park West and they began a brief relationship. Rodwell’s confrontations with the police over issues of LGBT harassment made Milk uneasy because he was worried about being outed, and he broke up with Rodwell. Milk left 360 Central Park West in 1963 and eventually rented another apartment near the park before moving to Greenwich Village with Jack Galen McKinley, who worked in the theater. Milk lived in San Francisco from 1969 to 1971, before briefly returning to New York to assist his friend Tom O’Horgan with musical productions on Broadway. In 1972, Milk moved back to San Francisco. He became active in LGBT political and business circles there, and ran twice (but lost) for the San Francisco Board of Supervisors; Mayor George Moscone, however, appointed Milk to the Board of Permit Appeals, making him the first openly gay commissioner in an American city. He finally won election as a supervisor in 1977, making him a national leader for LGBT rights and the first publicly elected out gay official in California history. Tragically, he (along with Mayor Moscone) was assassinated nearly a year after taking office by a disgruntled former supervisor.

Harvey Milk High School, in New York City, was named for him when it opened in 1985. The San Francisco building at 573-575 Castro Street, which housed his shop, Castro Camera, and his upstairs residence, was designated a city landmark in 2000. The U.S.N.S Harvey Milk, launched in 2021, is the first Navy ship to be named for an openly gay person.