Ernestine Eckstein was an influential lesbian of color who was active in the LGBT rights movement in the pre-Stonewall years. While living in this tenement building, from 1964 until 1968, she served as the vice president of the New York chapter of the Daughters of Bilitis and participated in two of the earliest pickets for gay rights in the United States.

From 1975 to 1996, renowned poet Allen Ginsberg lived in an apartment here with his life partner, Peter Orlovsky. During these years, he continued to write and also received numerous accolades for his distinguished career in poetry. Ernestine Eckstein holding a sign reading "Denial of Equality / of Opportunity / is Immoral" at a White House picket for gay rights, October 23, 1965. Photo by Kay Lahusen (credited under her pseudonym, Kay Tobin). Courtesy of the Manuscripts and Archives Division, The New York Public Library. Ernestine Eckstein (fourth from front) and Barbara Gittings (front) at a White House picket for gay rights, October 23, 1965. Photo by Kay Lahusen (credited under her pseudonym, Kay Tobin). Courtesy of the Manuscripts and Archives Division, The New York Public Library. Emma Van Cott (front) and Ernestine Eckstein, then-vice president of the New York chapter of the Daughters of Bilitis (back), at Riis Park Beach, 1965. Courtesy of the Lesbian Herstory Archives. Kay "Tobin" Lahusen photo of Ernestine Eckstein on the June 1966 cover of The Ladder. Contact sheet of Ernestine Eckstein in and near Washington Square Park, Greenwich Village, January 1966. The photo chosen for the cover of the June 1966 issue of The Ladder is in the first column, fifth down. Photos by Kay Lahusen (credited under her pseudonym, Kay Tobin). Courtesy of the Manuscripts and Archives Division, The New York Public Library. Example of a Mattachine Society ad appearing in the Village Voice, March 14, 1963. Ernestine Eckstein Residence
Born in South Bend, Indiana, Ernestine Eckstein (1941-1992) first became involved in activism as a student at Indiana University, where she worked with the NAACP during the Black civil rights movement. Eckstein joined the more progressive Congress of Racial Equality (CORE) after moving to New York City in May 1963. Even though she had been attracted to several female teachers and friends in her youth, she did not fully understand the concept of homosexuality until being introduced to the city’s gay community:

I’d never known anyone who was homosexual …. Never heard the word mentioned …. This was a kind of blank that had never been filled in by anything — reading, experience, anything — until after I came to New York.

She soon came across ads in the Village Voice for Mattachine Society of New York lectures, where she learned about the New York chapter of the Daughters of Bilitis (DOB). Seeking to become politically active in the LGBT rights movement, she joined both “homophile” organizations. City directories list Eckstein as living at 437 East 12th Street in the East Village from 1964 to 1970, though historian Marcia Gallo notes that she left for the San Francisco Bay Area in 1968. Eckstein is listed under her real name, Ernestine D. Eppenger, in the directories (some gay rights activists used pseudonyms to protect their identities).

Eckstein’s time in New York was her most influential as an LGBT rights activist. In the mid-1960s, she was vice president of DOB’s New York chapter and participated in two 1965 pickets to bring attention to discrimination against homosexuals: the first July 4th “Annual Reminder Day” in Philadelphia and an October 23rd picket in front of the White House. Photos indicate that she was the only participant of color and one of a handful of women. DOB activists Barbara Gittings and Kay Tobin (real name Kay Lahusen) conducted her only known interview, published in the June 1966 issue of The Ladder (1957-1972), DOB’s national magazine, in which Eckstein became the first American lesbian of color to be featured on the cover (in 1964, a year after Gittings became editor of The Ladder, photos of real lesbians replaced line drawings on the cover). In the interview, Eckstein speaks of the importance of LGBT people getting more involved in courtroom action in order to change laws and gain public exposure for gay rights, as was already happening in the Black civil rights movement.

Eckstein’s wish to bring more progressive changes to DOB was met with challenges, such as when her plan to have gay rights leader Frank Kameny speak to the New York chapter was ultimately overruled. By June 1966, she stepped down as vice president. Eventually growing tired of the conservatism and infighting, she left for the Bay Area and became involved in Black feminist issues with Black Women Organized for Action (BWOA). Little is known about her later life. She died in San Pablo, CA, at the age of 51.

Allen Ginsberg Residence
Allen Ginsberg (1926-1997), one of the 20th century’s foremost American poets, was a founding figure of the Beat Generation, a literary movement that explored United States politics and society in the post-World War II era. He is heavily associated with the East Village, living in the neighborhood for the majority of his adult life. Ginsberg’s longest residency was in a fourth-floor apartment in this building, from 1975 to 1996. Peter Orlovsky, his life partner, continued living here until about 2009, one year before his death.

Ginsberg also kept two other apartments here: one he used for work and one he sublet to friends and students. He and Orlovsky entertained a number of artistic and literary figures over the years, including Beat writers Herbert Huncke and William S. Burroughs. Musician Arthur Russell, who briefly dated Ginsberg, also lived in the building.

During his years on East 12th Street, Ginsberg continued his writing and activism work, keeping a busy schedule despite numerous health issues. In 1979, he was inducted into the American Academy of Arts and Letters and also received the Medal of Honor (for literature) from the National Arts Club. In 1995, he was a finalist for the Pulitzer Prize for his book Cosmopolitan Greetings: Poems 1986-1992. From 1996 to 1997, the last year of his life, he lived in an apartment at 404 East 14th Street.

For more information and background on Ginsberg, see the entry for his 170 East 2nd Street residence. 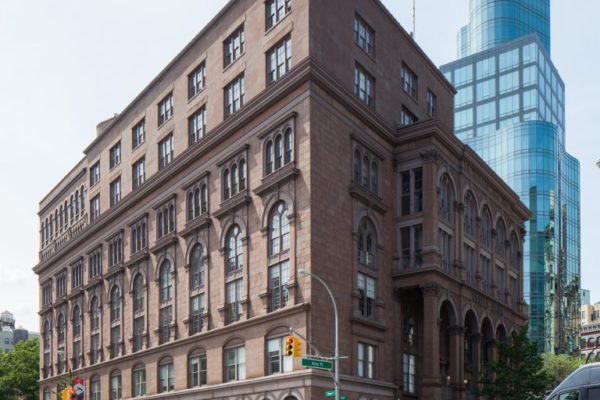