A founding figure of the Beat Generation, one of the 20th century’s most important literary movements, the openly gay poet Allen Ginsberg lived in this tenement building with his “life-long love” and poet Peter Orlovsky from August 1958 to March 1961.

Ginsberg, who by this point was famous for his now-iconic poem “Howl” (1956), largely wrote what he considered his most important poem “Kaddish” here in 1959. Screenshot of Allen Ginsberg and Jack Kerouac in the East Village, 1959. Source: oddballfilmvideo channel on YouTube. Portrait of Allen Ginsberg in his 170 East 2nd Street apartment as he leans against the door of his refrigerator, January 9, 1960. The small pictures on either side of his head are Edgar Allen Poe (left) and Charles Baudelaire. Photo by Fred W. McDarrah. Gift of the Estate of Fred W. McDarrah. 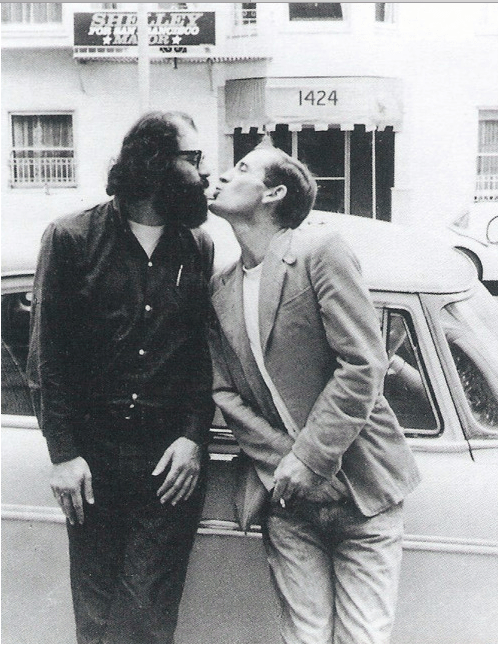 Allen Ginsberg (1926-1997), who was born into a Jewish family in New Jersey, is considered one of the 20th century’s foremost American poets. His early influences included Herman Melville, Walt Whitman, and Hart Crane. Ginsberg was a founding figure of the Beat Generation, a literary movement that explored United States politics and society in the post-World War II era. The movement’s origins can be traced to Ginsberg’s time as a Columbia University student, when, in 1944, he befriended gay and bisexual writers Jack Kerouac, Neal Cassady, Herbert Huncke, and William S. Burroughs. The Beats spent time at such downtown hangouts as the San Remo Café, Minetta Tavern, and the Gaslight Café. Ginsberg moved to San Francisco in 1953 and met his “life-long love” Peter Orlovsky (1933-2010), who became a poet, there a year later. His first public reading of his now-iconic poem “Howl” (1956) at the Six Gallery brought him, and Beat poets associated with him, widespread fame.

In August 1958, Ginsberg and Orlovsky moved into apartment 16 at 170 East 2nd Street in the East Village, their first New York City residence together. They lived there until March 1961, a period when Ginsberg also became a significant figure within the counterculture movement. While on East 2nd Street, Ginsberg wrote the majority of his long poem “Kaddish” (1959), in memory of his mother (in Judaism, Kaddish is a strongly-held custom of prayer that is spoken as part of the mourning ritual). The poem, which includes gay references, was later published in Kaddish and Other Poems (1961). Many scholars consider it his most important poem, as did Ginsberg himself during an interview near the end of his life:

I think a younger generation doesn’t know much more than ‘Howl’, that’s why I was glad to read ‘Kaddish’ — because it’s a stronger poem and more important. It has more of an emotional impact. And there are more obvious senses of compassion and humor and tragedy than ‘Howl’.

As with much of Ginsberg’s work, “Howl” and “Kaddish” feature gay subject matter; a highly publicized 1957 obscenity trial for “Howl” helped establish Ginsberg as an influential gay poet who wrote explicitly about homosexuality during a conservative era when other gay and bisexual poets tended to be more nuanced. In The Homosexual Tradition in American Poetry (1979), author Robert K. Martin notes that Ginsberg “made his sexuality an integral part of his public image and his poetry” as “part of his larger attempt to undermine American society and its pretensions to respectability.” Ginsberg spoke about his “marriage” to Orlovsky, though the latter was bisexual and they had an open relationship.