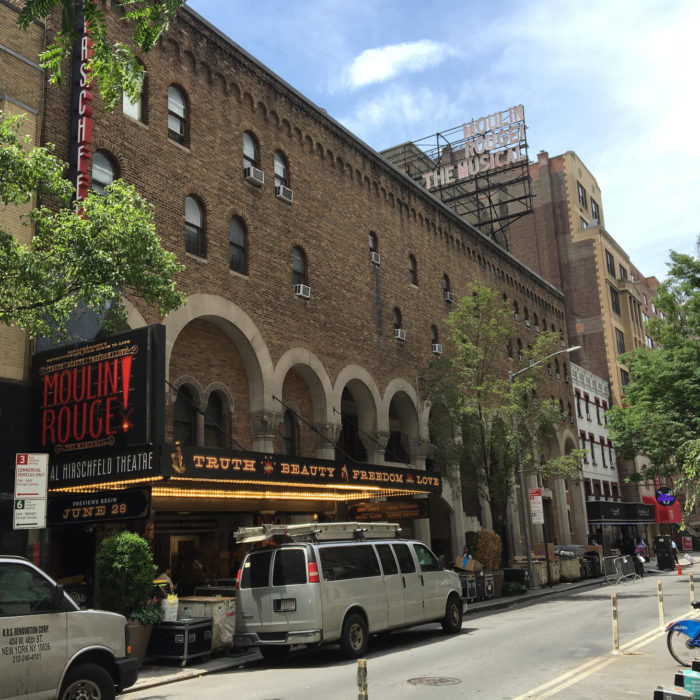 after opening as the Martin Beck Theater in 1924, this site was renamed the Al Hirschfeld Theater in 2005

Opened as the Martin Beck Theater in 1924, this venue has staged multiple productions involving major LGBT performers and creators, including three big hits: The Voice of the Turtle, Grand Hotel, and Guys and Dolls. “First Lady of the Theater” Katharine Cornell also appeared in six plays here.

The venue was renamed the Al Hirschfeld Theater in 2005. Cris Alexander, Adolph Green, and John Battles (sailors) in On the Town, 1945. Courtesy of the Library of Congress. Katharine Cornell in Antony and Cleopatra, 1947. Photo: Vandamm. Courtesy of the Museum of the City of New York. Maureen Stapleton and Eli Wallach in The Rose Tattoo by Tennessee Williams, 1951. Jerry Herman and Don Appell by Milk and Honey sign on the Martin Beck Theater marquee, 1961. Playbill cover for A Delicate Balance, by Edward Albee, 1966. Inflatable giant's leg on the Martin Beck Theater for Into the Woods, 1987. Photo: Kali Almdale. Other plays here by LGBT creators included A la Carte (1927) by George Kelly; Flowers of the Forest (1935) by John Van Druten, and with actor Katharine Cornell; The Pirate (1942-43), with costume design by Miles White, and with actors Alfred Lunt and Lynn Fontanne; The Corn Is Green (1943) by Emlyn Williams; A Connecticut Yankee (1943-44), with lyrics by Lorenz Hart; St. Louis Woman (1946) by Arna Bontemps and Countee Cullen, and with choreography by Charles Walters; The Rose Tattoo (1951; Best Play Tony Award), with Sal Mineo, Orpheus Descending (1957), and Sweet Bird of Youth (1959-60), all by Tennessee Williams; The Grass Harp (1952) by Truman Capote, with scenic and costume design by Cecil Beaton; Candide (1956-57), with music by Leonard Bernstein, scenic design by Oliver Smith, and costume design by Irene Sharaff; Who Was That Lady I Saw You With? (1958), with scenic design by Rouben Ter-Arutunian; Say, Darling (1958-59, opened at the ANTA Playhouse), designed by Oliver Smith; The Ballad of the Sad Café (1963-64), based on a novella by Carson McCullers, A Delicate Balance (1966-67; Pulitzer Prize for Drama), and All Over (1971), all by Edward Albee, the second with scenic design by William Ritman, and the latter with scenic and costume design by Rouben Ter-Arutunian; Hallelujah, Baby! (1967-68) by Arthur Laurents (Best Musical Tony Award), with costume design by Irene Sharaff; Habeas Corpus (1975-76) by Alan Bennett; Happy End (1977), adapted by Michael Feingold; The Little Foxes (revival, 1981), with costume design by Florence Klotz; The Rink (1984) by Terrence McNally, with music and lyrics by John Kander and Fred Ebb; and Moon Over Buffalo (1995-96), with costume design by Bob Mackie. Strange Interlude (1963; opened at the Hudson Theater) was the first revival of Eugene O’Neill’s 1928 play, which had included an early closeted gay male character.