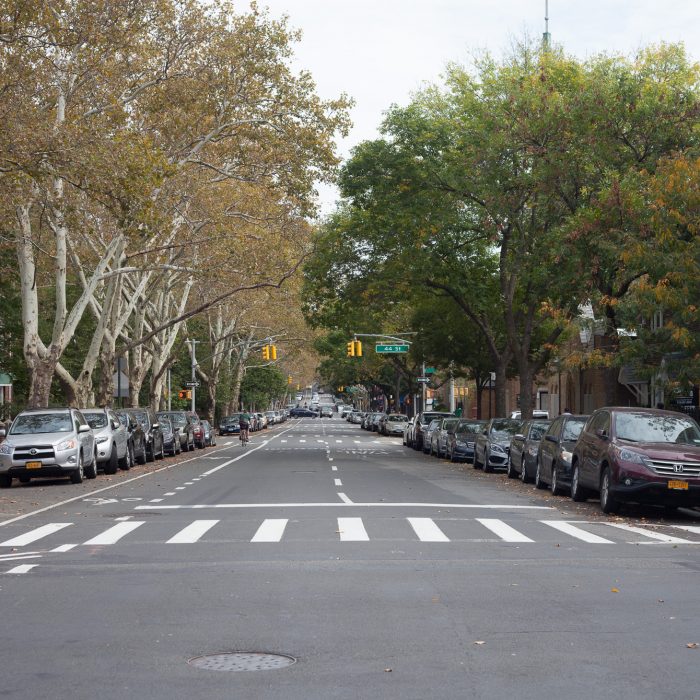 St. Pat’s for All Parade

In 2000, the inaugural St. Pat’s for All Parade took place in the historically Irish neighborhoods of Sunnyside and Woodside, Queens.

The event, which still runs, was founded by LGBT rights activist Brendan Fay as an inclusive alternative to St. Patrick’s Day parades in Manhattan, Brooklyn, and the Bronx, which banned gay Irish groups from marching. Screen capture of Dark Cloud/James Jackson, of Irish and Choctaw descent, representing the Choctaw Nation, which raised funds to help those affected by the Great Potato Famine in 1840s Ireland. Inaugural St. Pat's for All Parade, March 5, 2000. Source: "All the Children Equally - St. Pat's for All" video, via St. Pat's for All website. 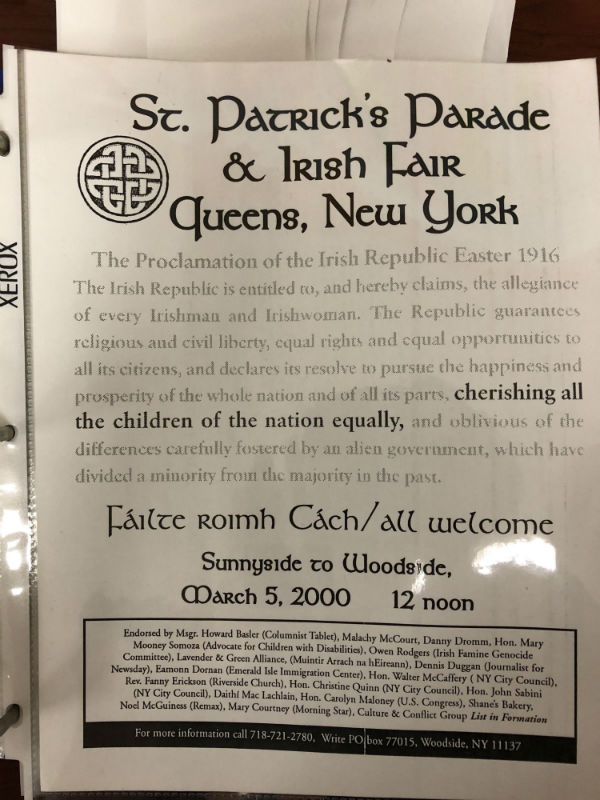 Flyer from the Moral Action Committee distributed ahead of the inaugural St. Pat's for All Parade, 2000. Courtesy of The Daniel Dromm Papers, The LGBTQ Collection, LaGuardia and Wagner Archives, LaGuardia Community College. Flyer distributed by Concerned Friends of Woodside ahead of the inaugural St. Pat's for All Parade, 2000. Courtesy of Brendan Fay. 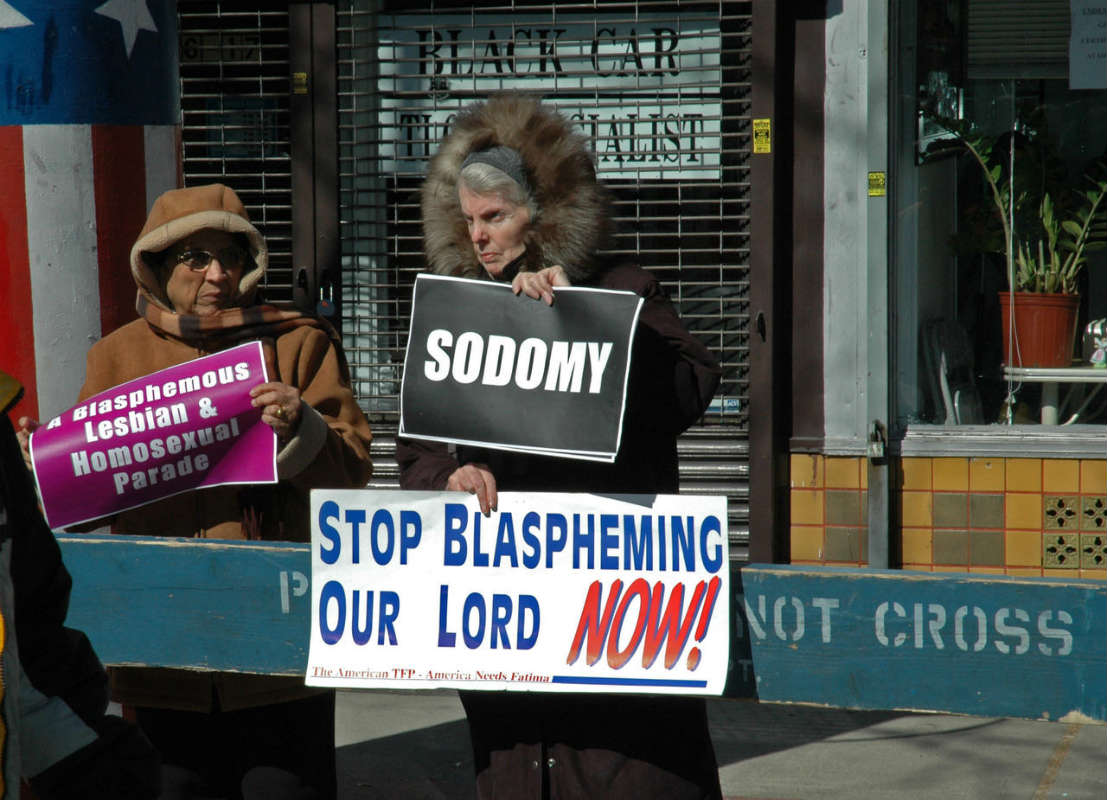 Protesters on the sidelines, St. Pat's for All Parade, March 4, 2006. Courtesy of Brendan Fay. Brendan Fay (left, with rainbow scarf) and others, St. Pat's for All Parade, March 6, 2016. Courtesy of Brendan Fay. In 1991, the Ancient Order of Hibernians (AOH), the long-time organizers of the annual St. Patrick’s Day Parade in Manhattan, refused to allow the Irish Lesbian and Gay Organization (ILGO) to march with its banner. As a result, then-Mayor David Dinkins became the city’s first mayor to decline an invitation to lead the nearly 230-year-old parade, and he instead invited ILGO to march with him and a local AOH division further down the line (ILGO marched without its banner). The contingent faced hostility and homophobic slurs from spectators and marchers. In 1993, AOH won a lawsuit to ban gay groups from marching, resulting in a parade that would be “a celebration of a victory of traditional Catholic values over homosexuals,” according to the organization’s views in a 1993 New York Times article.

The formation of ILGO in April 1988 was indirectly prompted by Brendan Fay, a relatively recent immigrant from Drogheda, Ireland, who posted a notice on the Oscar Wilde Memorial Bookshop’s bulletin board in hopes of connecting with the city’s Irish LGBT community. After photos of Fay marching with ILGO in the 1991 parade were published, he was fired from Mary Louis Academy, a Catholic girls’ school in Jamaica, Queens, where he had taught religion for three years. In 1994, he founded the Lavender and Green Alliance at what is now known as the LGBT Community Center. Over the years, both ILGO and Lavender and Green, along with allies, protested the exclusion of gay Irish people from marching openly in the Fifth Avenue parade. Similar protests took place against bans at the 1999 parades in Brooklyn and the Bronx. Several were arrested at each event.

In 2000, Fay founded the St. Pat’s for All Parade as an inclusive celebration (its slogan, “Cherishing All the Children of the Nation Equally,” comes from the 1916 Easter Proclamation of the Irish Republic). He co-chaired the Sunday, March 5th, event with Ellen Duncan of the Ethical Culture Society of Queens. The route ran through two traditionally Irish neighborhoods, along Skillman Avenue from 43rd Street in Sunnyside to 58th Street in Woodside.

A moment of silence was held for Robert Rygor, who had protested gay exclusion from the Fifth Avenue parade before his death from AIDS-related complications in 1994. St. Pat’s for All was organized by gay and straight people of Irish descent (including Queens Pride Parade founder Daniel Dromm), and while it was the city’s only St. Patrick’s parade in which LGBT people could openly participate, only some of the over 70 contingents were gay-specific groups. Marchers included those from ILGO, Lavender and Green, the Queens Lesbian and Gay Pride Committee, SAGE, Dignity/New York, Queens Gays & Lesbians United, St. Andrew’s Episcopal Church, the Queens chapter of PFLAG, Irish Arts Center, Emerald Isle Immigration Center, then-First Lady Hillary Clinton, and Father Mychal F. Judge of St. Francis of Assisi Church, in Manhattan (parade organizers later honored Judge following his death in the September 11, 2001, terrorist attack on the World Trade Center). The St. Pat’s for All Parade faced — and, to a lesser extent, still faces — opposition from highly conservative Catholics, but it has nevertheless grown in popularity and diversity, and continues to march along Skillman Avenue annually.

In 2016, after many years of controversy, the Lavender and Green Alliance was allowed to march with its banner in Manhattan’s St. Patrick’s Day Parade, the world’s largest such celebration. Its contingent included members of ILGO and Irish Queers. 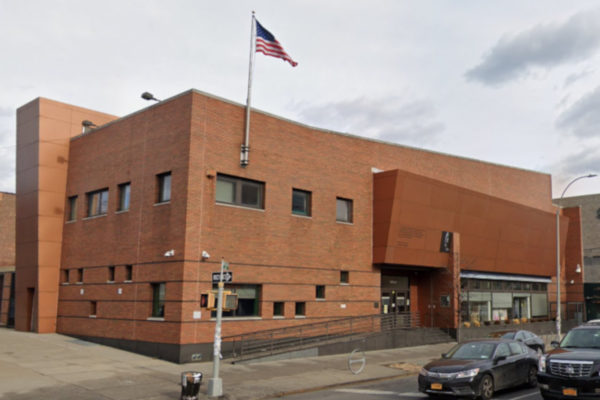