also known as Cobble Court; before the house was moved to Charles Street in 1967, it was located at 1335 York Avenue on the Upper East Side

From 1942 until her death in 1952, Margaret Wise Brown – the best-selling children’s book author of The Runaway Bunny, Goodnight Moon, and other stories – used this “Cobble Court” house (since enlarged) as her writing studio.

At the time, it was located at 1335 York Avenue, near the Upper East Side residence that she shared with her partner, socialite Blanche Oelrichs, who went by her pen name, Michael Strange. 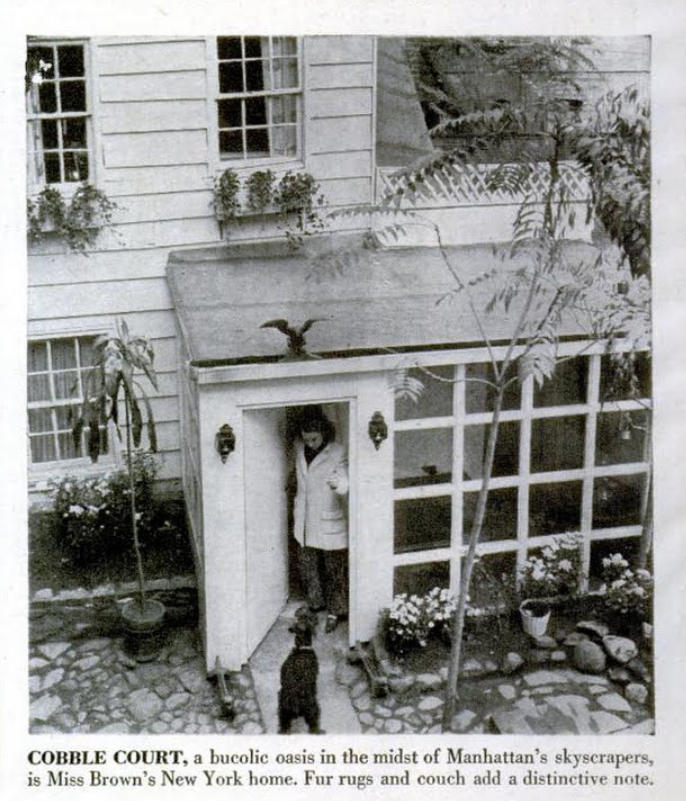 Margaret Wise Brown at her Cobble Court studio on York Avenue for a Life 1946 photoshoot. Source: December 2, 1946 issue of Life. Green square (added by the Project) shows the original location of the house, which was at the rear of the lot of 1335 York Avenue on the Upper East Side. Brown entered through the front, two-story brick house to get to her studio. Plate 111, G.W. Bromley & Co., 1955-1956. Source: Lionel Pincus and Princess Firyal Map Division, The New York Public Library. Goodnight Moon (1947), by Margaret Wise Brown. Illustrator Clement Hurd based the arched mantle on the one at Cobble Court. Front cover of The Hidden House, (1953) by Margaret Wise Brown. First edition book in the collection of Amanda Davis. The first two pages of The Hidden House (1953), by Margaret Wise Brown. First edition book in the collection of Amanda Davis. The house a few months after it was moved to 121 Charles Street in Greenwich Village. Photo taken summer 1967. Courtesy of the NYC Landmarks Preservation Commission.

Margaret Wise Brown (1910-1952), the prolific, best-selling author of children’s books, was born in her family’s house at 118 Milton Street in Greenpoint, Brooklyn, and grew up on Long Island. In the mid-1930s, through her progressive education training at the Bank Street School and the Little Red School House, in Greenwich Village, she honed her writing style and observed children’s perspectives and word use. Her first book, When the Wind Blew, was published in 1937. Brown is credited with popularizing the picture book and helping to reimagine children’s literature by centering stories on a child’s reality rather than on fairy tales.

In 1939, Brown met Blanche Oelrichs (1890-1950), an Upper East Side socialite who, since the early 1920s, went by her pen name, Michael Strange. Brown and Strange began a long-term, tumultuous relationship in 1942. After Strange’s third husband discovered the affair that same year, she left their 10 Gracie Square residence and moved to two apartments at 186 East End Avenue. One of the apartments became Brown’s primary city residence for the rest of the 1940s. Soon in need of a separate space to write, she rented a nearby c. 1810 farmhouse that was hidden behind a brick house at 1335 York Avenue, between East 71st and 72nd Streets. Lacking insulation and electricity, the quirky two-story, four-room wood house shared a cobblestone courtyard with the front building and was affectionately known as Cobble Court.

The majority of Brown’s more than 100 books were written during her ten-year tenancy of Cobble Court. Her most famous books, The Runaway Bunny (1942) and Goodnight Moon (1947), were edited by the pioneering Ursula Nordstrom of Harper & Brothers. Brown’s fame grew as the post-World War II baby boom led to an increased demand for children’s books, and hers in particular. Her whimsical Cobble Court writing studio became an integral part of her public image as a children’s book author. Life magazine took photos of her at her “bucolic oasis in the midst of Manhattan’s skyscrapers” for its December 2, 1946, issue and Good Housekeeping apparently likened the house to a fairy tale hideaway. Featured in The Hidden House (1953), its arched mantle was also recreated in Goodnight Moon.

Brown’s relationship with Strange inspired several stories, including Don’t Frighten the Lion (1942), based on one of their encounters at the Central Park Zoo, and Robin’s House (1944), written in response to Strange’s depression over the suicide of her son, Robin Thomas. When Strange’s health declined in 1949, she became more religious and believed she would only recover if she ended their “sinful” relationship. Nevertheless, she made Brown her executor. Brown wrote The Dark Wood of the Golden Birds (1949) for her as she was dying and, after Strange’s death, the grieving author based Mister Dog (1951) on her life alone at Cobble Court.

Brown, who today might identify as bisexual, had relationships with men and was engaged to James Stillman Rockefeller, Jr. before she died. Her ashes were scattered at The Only House, her Maine residence. On March 5, 1967, facing demolition, the Cobble Court house was moved to its present-day lot at 121 Charles Street in Greenwich Village, and, in 2000, was expanded in size.