From 1953 to 1960, playwright and activist Lorraine Hansberry resided in the third-floor apartment of this building.

While here, Hansberry lived parallel lives: one as the celebrated playwright of A Raisin in the Sun, the first play by a Black woman to appear on Broadway, and the other, as a woman who privately explored her homosexuality through her writing, relationships, and social circle.

Header Photo
The full address of the building is 335-337 Bleecker Street and is five window bays wide. The entrance to the upper apartments is the central door between the two storefronts. Credit: Christopher D. Brazee/NYC LGBT Historic Sites Project, 2020. 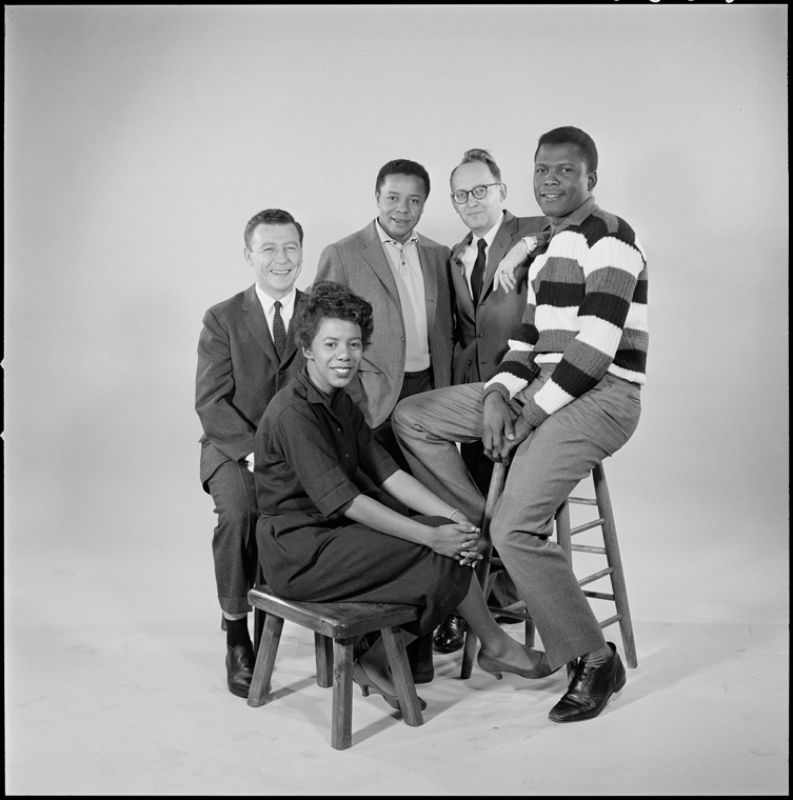 Claudia McNeil, Sidney Poitier, and Diana Sands in the original stage production of "A Raisin in the Sun" at the Ethel Barrymore Theatre, 1959. Photo by Friedman-Abeles. Courtesy of the Billy Rose Theatre Division, The New York Public Library. Set design by Ralph Alswang for the original stage production of "A Raisin in the Sun" at the Ethel Barrymore Theatre, 1959. Photo by Friedman-Abeles. Courtesy of the Billy Rose Theatre Division, The New York Public Library. Detail of the billboard for "A Raisin in the Sun" hanging in Union Square, 1959. Note: Ossie Davis replaced Sidney Poitier by this time. Screen capture from the documentary "Lorraine Hansberry: Sighted Eyes/Feeling Heart" by Tracy Heather Strain, via PBS. Ethel Barrymore Theatre marquee during the production of "A Raisin in the Sun," 1959. Screen capture from the documentary "Lorraine Hansberry: Sighted Eyes/Feeling Heart" by Tracy Heather Strain, via PBS. "Chanson du Konallis" short story, appearing in a 1958 issue of the national lesbian magazine "The Ladder", published by the Daughters of Bilitis. Screen capture from the documentary "Lorraine Hansberry: Sighted Eyes/Feeling Heart" by Tracy Heather Strain, via PBS.

Playwright and activist Lorraine Hansberry (1930-1965) moved to New York City in 1950 where she eventually wrote for the Black newspaper Freedom, based in Harlem, on issues such as racial, economic, and gender inequality. After marrying Jewish songwriter/producer Robert Nemiroff in 1953, the couple moved to the third-floor apartment at 337 Bleecker Street in Greenwich Village. (At the time they lived here, the upper two stories had one apartment per floor, which were accessed by the central door located between the two storefronts.) They separated in 1957, though they remained close friends. Hansberry kept the apartment.

In 1956, Hansberry began to flesh out what would become her best known work: a dramatic play about a Black family in her native, segregated Chicago, called A Raisin in the Sun (the title comes from a line in the Langston Hughes poem “Harlem”). Its New York premiere on March 11, 1959 at the Ethel Barrymore Theater made Hansberry the first Black woman to have a play staged on Broadway. She also became the first African-American playwright, and the youngest playwright ever, to win the New York Drama Critics’ Circle Award for Best American Play. An instant celebrity, Hansberry was photographed in her book-lined apartment for Vogue Magazine one month later.

In “Sweet Lorraine” (1969), her friend James Baldwin explained the play’s significance: “I had never in my life seen so many black people in the theater. And the reason was that never before, in the entire history of the American theater, had so much of the truth of black people’s lives been seen on the stage. Black people had ignored the theater because the theater had always ignored them.” The screenplay she wrote for the 1961 movie version was heavily edited by the studio to cater to white audiences.

Even before the play’s success, Hansberry privately identified as a lesbian and wrote letters — signed “L.N.H.” or “L.N.” — to The Ladder, the monthly national lesbian publication of the Daughters of Bilitis. DOB founders Del Martin and Phyllis Lyon, of San Francisco, acknowledged in their 1972 anthology Lesbian/Woman that Hansberry was an early member of the New York chapter and contributed to DOB’s magazine (1956-1972) in its earliest years. Hansberry’s inner conflict regarding societal expectations for women and her same-sex desires are often revealed in these letters:

I wanted to leap into the questions raised on heterosexually married lesbians. I am one of those. How could we ever begin to guess the numbers of women who are not prepared to risk a life alien to what they have been taught all their lives to believe was their natural destiny–AND–their only expectation for ECONOMIC security?

Lorraine Hansberry, 1957 letter to The Ladder

Using the pen name Emily Jones, she also wrote four lesbian-themed short stories: The Budget, The Anticipation of Eve, and Renascence, appearing in the major Los Angeles gay magazine ONE, and Chanson du Konallis, in a 1958 issue of The Ladder.

A few weeks before Raisin’s premiere, Hansberry went to her first of many lesbian house parties in Greenwich Village; one fellow guest, Renee Kaplan, with whom Hansberry had what was likely her first same-sex relationship, attended the premiere. She later dated writer Eve Ward (which was not her real name). Her lesbian social circle consisted of white women, including writers Marijane Meaker, Louise Fitzhugh, and Patricia Highsmith, and future LGBT rights activist Edie Windsor. While Hansberry was the only Black woman, and therefore isolated from other Black lesbian artists, her work would later inspire Audre Lorde, who wrote in her 1986 book, I Am Your Sister: Black Women Organizing Across Sexualities, “When you see the plays and read the words of Lorraine Hansberry, you are reading the words of a woman who loved women deeply.”

Hansberry bought and moved to the residential building at 112 Waverly Place in 1960.

Landmark Designations for LGBT Significance
In April 2021, through the NYC LGBT Historic Sites Project’s extensive research and writing, the Lorraine Hansberry Residence was listed on the National Register of Historic Places by the U.S. Department of the Interior, following the site’s listing, in March 2021, on the New York State Register of Historic Places. The National Register report is available in the “Read More” section below. 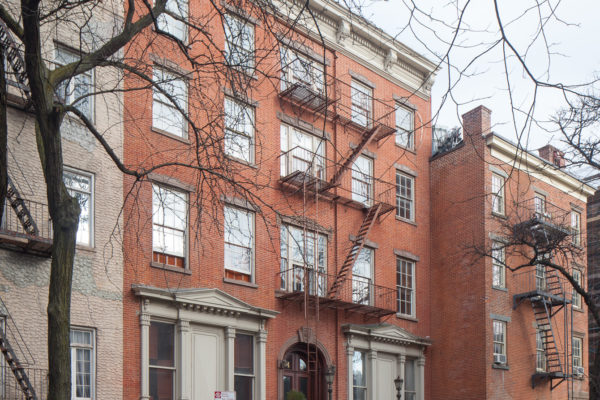