the building this action was held in was then known as Intermediate School 70 / O. Henry School, and is now known as the NYC Lab School for Collaborative Studies

“Lavender Menace” was an action led by Radicalesbians, with women from the Gay Liberation Front and several feminist organizations, at the National Organization for Women’s (NOW) Second Congress to Unite Women in May 1970 to protest the rejection of lesbians in the second-wave women’s liberation movement.

This action largely led to NOW’s resolution to support lesbians in 1971 and increased visibility for and awareness of lesbian issues nationwide. Unidentified participant in "Lavender Menace" action proudly rips off her shirt to reveal a Lavender Menace shirt underneath, May 1, 1970. Photo by Diana Davies. Courtesy of Manuscript and Archives Division, The New York Public Library. (l to r) Lita Lepie, Judy Cartisano, and Arlene Kisner storm the stage holding signs that say “THE WOMEN’S MOVEMENT IS A LESBIAN PLOT!” May 1, 1970. Photo by Diana Davies. Courtesy of Manuscript and Archives Division, The New York Public Library. Martha Shelley (front) speaks at Second Congress to Unite Women. Conference attendees and other Menaces, including Donna Gottschalk, wait in line behind her to share thoughts on lesbianism, May 1, 1970. Photo by Diana Davies. Courtesy of Manuscript and Archives Division, The New York Public Library. 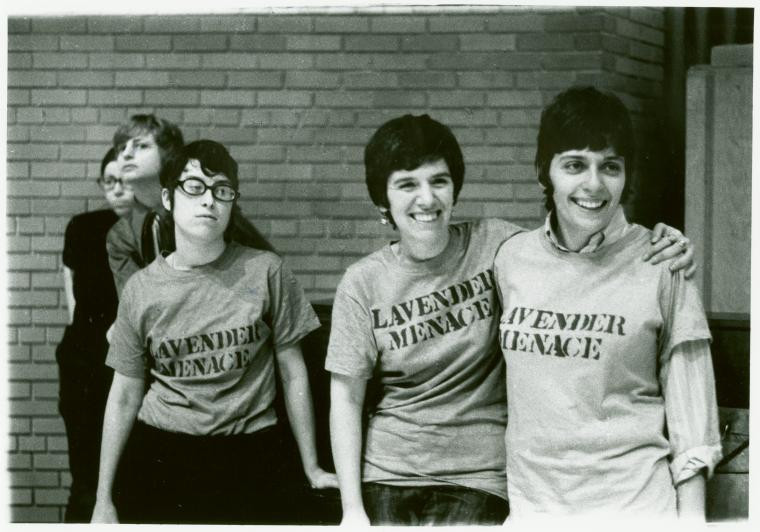 (l to r) Linda Rhodes, Arlene Kisner (sometimes misidentified as Arlene Kushner), and Ellen Broidy participate in the "Lavender Menace" action at the Second Congress to Unite Women, in Chelsea, May 1, 1970. Photo by Diana Davies. Courtesy of Manuscript and Archives Division, The New York Public Library. Lavender Menace shirt worn during the 1970 action. Courtesy of the Lesbian Herstory Archives.

List of resolutions presented by participants in the "Lavender Menace" action to NOW general planning meeting at Second Congress to Unite Women, May 3, 1970. Source: Gay Power. On the evening of May 1, 1970, lesbians from Radicalesbians, including women from the Gay Liberation Front (GLF) and other feminist groups, conducted a well-organized hijacking of the Second Congress to Unite Women, which was held at Intermediate School 70 in Chelsea. They called this action “Lavender Menace” and demanded, in front of hundreds of women, that the National Organization for Women (NOW) accept lesbianism as an integral part of the women’s liberation movement.

The name “Lavender Menace” is a defiant reference to anti-lesbian comments from NOW leaders. In 1969, NOW president Betty Friedan referred to lesbians as the “lavender menace,” fearing that lesbians would tarnish the movement’s reputation if NOW members were accused of being “man-haters” or “a bunch of dykes.” Susan Brownmiller dismissed lesbians as inconsequential in the movement by calling them a “lavender herring” in a widely-publicized article in The New York Times in March 1970.

Right before the start of the Congress’ plenary session, Griffo and Jessica Falstein shifted the conference into planned anarchy with the flick of a light switch:

The lights went out, people heard running, laughter, a rebel yell here and there, and when the lights were turned back on, those same 300 women found themselves in the hands of the LAVENDER MENACE.

Seventeen lesbians wearing Lavender Menace shirts lined the aisles of the school auditorium, yelling and holding signs that declared, “We are all lesbians,” “Lesbianism is a women’s liberation plot,” and “We are your worst nightmare, your best fantasy.” Brown ripped off her shirt to reveal a Lavender Menace shirt underneath. About twenty Menaces hidden in the audience then rose and expressed their support, including Karla Jay, who proclaimed, “Yes, yes, sisters! I’m tired of being in the closet because of the women’s movement.” Martha Shelley grabbed the microphone and Menaces stormed the stage to demand that NOW abandon their schedule and focus on issues of lesbianism.

NOW leaders attempted to restore their planned session and a few women left, but the majority of the audience was engaged by the action’s humor and theatricality. The Menaces held the floor for over two hours, inviting all attendees to share their thoughts and questions on lesbianism. Many straight women thanked Menaces for making them confront their feelings about lesbianism, and Black and working-class women connected with the Menaces’ feelings of exclusion in the women’s liberation movement. Through two days of workshops on lesbianism that replaced the remainder of the Congress’ schedule and a GLF dance at the Church of the Holy Apostles, many straight or questioning women confronted their anti-lesbian practices. The Congress culminated on May 3rd with Menaces presenting the resolutions developed in these workshops to NOW leadership.

Lavender Menace gave lesbians increased control, power, and visibility in the women’s liberation movement. Knowing that “Lavender Menace will strike again–anywhere, anytime, anyplace,” NOW passed a resolution acknowledging the double-oppression of lesbians as women and homosexuals and recognizing the “oppression of lesbians as a legitimate concern of feminism” in 1971. Still, Friedan did not fully acknowledge lesbian participation until the 1977 National Women’s Conference.