From 1969 to 1974, the Church of the Holy Apostles in Chelsea was one of the most important meeting places in New York City for organizations of the early post-Stonewall gay rights movement, including the West Side Discussion Group, Gay Liberation Front, and Gay Activists Alliance. It essentially served as New York City’s first LGBT community center.

Three early gay religious congregations provided services here in the 1970s: the Church of the Beloved Disciple, “a church for gay people;” the Metropolitan Community Church of New York; and an LGBT synagogue that would later become known as Congregation Beit Simchat Torah.

Through the efforts of the NYC LGBT Historic Sites Project, this site’s 1972 nomination to the National Register of Historic Places was amended in 2020 to include its significance to LGBT history. John Noble and Father Robert M. Clement in the 1975 Gay Pride March. Gift of The Estate of Fred W. McDarrah. 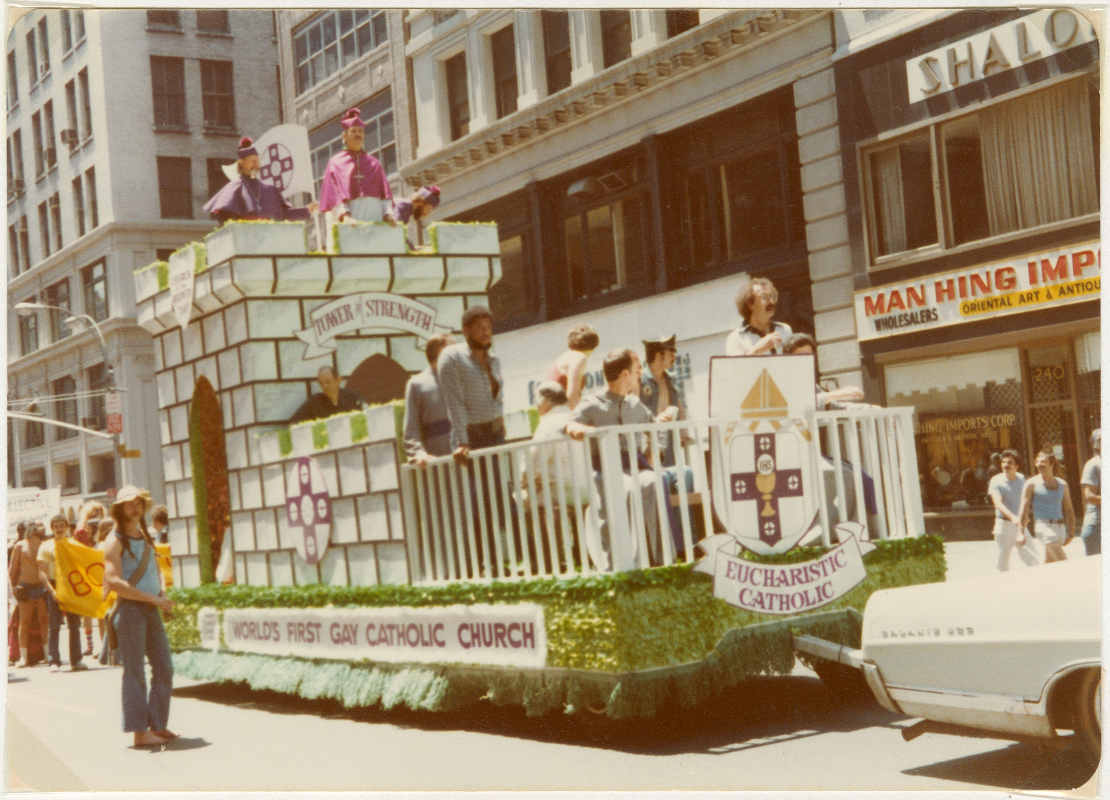 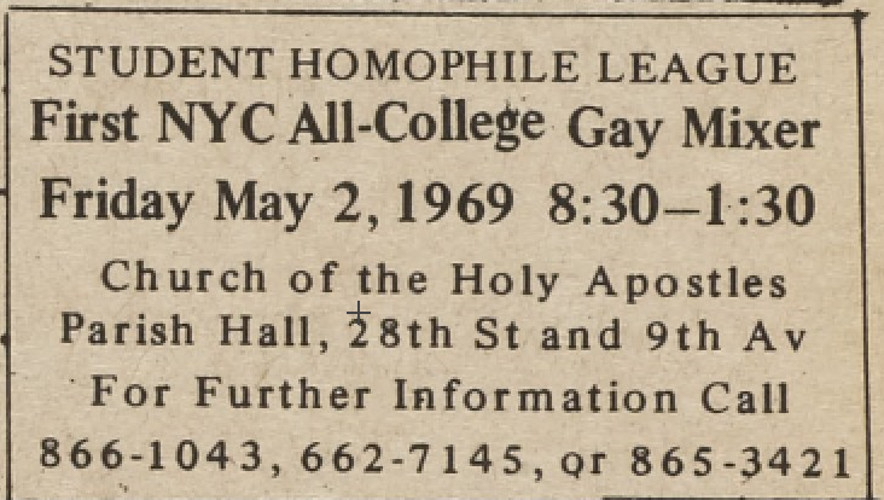 Gay Liberation Front (GLF) ad for meetings at the Church of the Holy Apostles, in COME OUT!, June 1970. Source: Houston LGBT History website. Ad for the Metropolitan Community Church holding religious services at the Church of the Holy Apostles, October 12, 1973. Source: The New York Times. The Church of the Holy Apostles in Chelsea was one of the most important meeting places in New York City for organizations of the early post-Stonewall gay rights movement, particularly from 1969 to 1974. The Episcopalian rector at Holy Apostles, Father Robert Weeks, was instrumental in allowing this to happen, in part because his church was financially strapped and needed the rental income that groups could provide. In November 1967, Weeks had joined a gathering of regional Episcopal priests which put forth one of the first religious declarations that homosexuality was morally neutral. Weeks presided over a number of early gay marriages (“services of friendship”), and participated in the protest led by the Gay Liberation Front (GLF) and Gay Activists Alliance (GAA) after the police raid on the Snake Pit in March 1970, also praying for the injured Diego Vinales at St. Vincent’s Hospital.

One of the earliest LGBT events at Holy Apostles (in the parish house) was the First New York City All-College Gay Mixer on May 2, 1969, sponsored by Columbia University’s Student Homophile League (formed in 1966). The first LGBT group to meet here regularly, from August 1969 to 1971, was the West Side Discussion Group (WSDG), which held weekly meetings and dances. Initially part of the Mattachine Society of New York, WSDG became a separate organization in 1956, and dropped its affiliation with Mattachine in 1965 after more militant leaders took over Mattachine. GLF held its weekly Sunday meetings here from December 1969 to December 1970, also using Alternate U. for dances and events, and then moving to the Gay Community Center.

Gay Youth was founded in 1970 and had its social meetings here until 1972. The first dance for GLF women was held here in June 1970. GAA had its Thursday meetings and its dances here between January 1970 and May 1971, when it moved to the Firehouse. Lesbian Liberation, a committee of GAA, was formed here. Holy Apostles was the first location for Identity House, a walk-in counseling center, from the end of 1972 to 1973.

In July 1970, Father Weeks turned over Holy Apostles for Sunday afternoon services to the pioneering Church of the Beloved Disciple, “a church for gay people.” Beloved Disciple was founded by Father Robert M. Clement, a former priest in the Polish National Catholic Church and the first openly gay priest to participate in the Christopher Street Liberation Day March in June 1970, and his lover, John Noble. Clement began to officiate over same-sex “holy union” ceremonies at Holy Apostles in June 1970. Clement and Noble were married at 33 Wooster Street in July 1971 by Reverend Troy Perry, who had founded the gay Metropolitan Community Church in Los Angeles in 1968. New York’s City Clerk Herman Katz, incensed at these “illegal marriages” by Clement and Weeks, threatened arrest. GAA held one of its most famous and creative “zaps” on June 4, 1971, at Katz’s office in the Municipal Building – an engagement party for two same-sex couples, complete with wedding cake. Beloved Disciple left Holy Apostles in the fall of 1972.

Then, in February 1973, Jacob Gubbay, a Jewish man from India, placed an ad in the Village Voice for a gay Shabbat service to be held here. The group was successful in negotiating space for a gay synagogue to host Friday night services at Holy Apostles’ parish house. The congregation, later officially named Congregation Beit Simchat Torah, held services here until it found a permanent home in Westbeth in July 1975. The congregation became so large that its Friday services returned to Holy Apostles, this time in the sanctuary, from 1998 to 2016.

By 1974, Father Weeks had begun an outreach ministry to the LGBT community, which had not especially participated in Holy Apostles’ own services and activities, and ended the church’s policy of leasing space to LGBT organizations.

In 1977 at Holy Apostles, Ellen M. Barrett was ordained as a priest by Bishop Paul Moore. She was one of the first American women to be ordained, and was also the very first openly gay Episcopal priest. She had previously served as a co-chairwoman of Daughters of Bilitis, New York, and as a moderator of Gay Students Liberation at NYU, and was a member of Radicalesbians of GLF. She attended GAA meetings at Holy Apostles, and had participated in the congregation of Holy Apostles, MCC, and Beloved Disciple.

Landmark Designations for LGBT Significance
In March 2020, the NYC LGBT Historic Sites Project’s amendment to the 1972 National Register of Historic Places listing of the Church of the Holy Apostles was approved by the National Park Service, following the amendment to the site’s New York State Register of Historic Places listing in January 2020. The amendment, available in the “Read More” section below, adds LGBT context and significance to the 1972 listing.

In March 2020, through the NYC LGBT Historic Sites Project’s extensive research and writing, the 1972 nomination of the Church of the Holy Apostles to the National Register of Historic Places was amended to include its significance to LGBT history. This followed the Project’s amendment to the site’s New York State Register of Historic Places listing in January 2020. The National Register report amendment is available in the “Read More” section below. 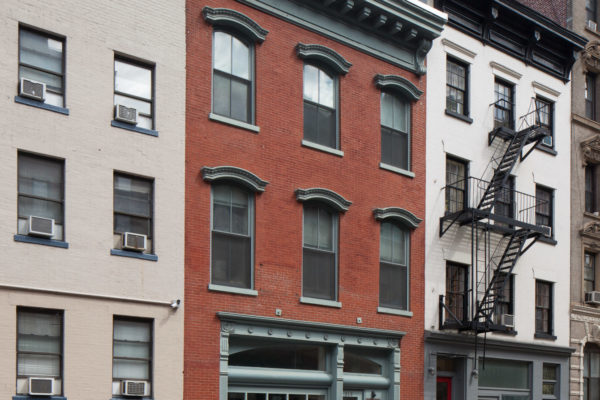