The Gay Alliance of Brooklyn was one of the first gay civil rights organizations established in New York City outside of Manhattan. The group, which was active from 1971 to 1973, was organized at the Spencer Memorial Church in Brooklyn Heights, a church with a welcoming, radical minister.

The House of David and Jonathan, reportedly the country’s first gay synagogue, held services here in November and December 1970. 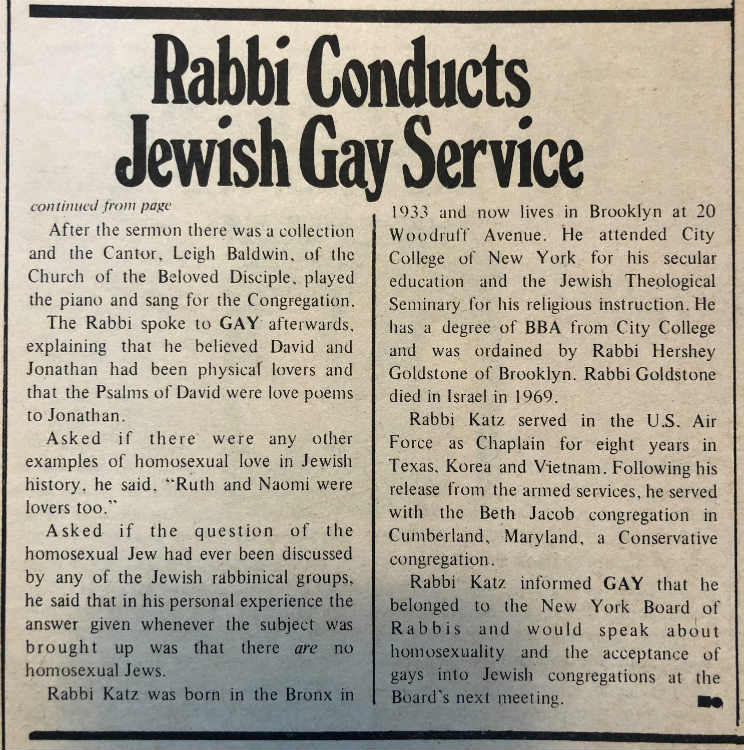 Following Stonewall, several activist gay organizations were established in New York, notably the Gay Liberation Front and Gay Activists Alliance, all in Manhattan. Soon, groups in other boroughs organized, including the Gay Alliance of Brooklyn (GAB), which was an offshoot of the GAA and active from 1971-1973. The GAB held its early meetings in the sanctuary of the Spencer Memorial Church in Brooklyn Heights.

We are a new organization devoted to achieving liberation for all gay women and men.

At its peak, the group had a membership of over 300. GAB sponsored political discussions, took part in gay community events, lobbied local politicians and newspapers, held weekly Tuesday night meetings, and established committees that included Arts and Crafts, Community Relations, Dance, Legal, Goods and Services, Membership and Orientation, Political, Social, and Talk Groups. Monthly dances were held at the Spencer Church and, after the church closed in late 1972, at the nearby Hotel Bossert at 98 Montague Street. Although the membership was primarily men, lesbian members sponsored a women’s caucus with its own social events. GAB also helped establish other gay groups in the city, including the Gay Alliance of Queens County, which met at 90-50 Parsons Boulevard, in Flushing; Canarsie Gay Alliance, at 1182 East 93rd Street, in Brooklyn; and Gay Westsiders, at 2091 Broadway at 73rd Street on Manhattan’s Upper West Side.

A New York Daily News reporter visited a meeting in 1971, just after GAB was founded, and reported “about 150 men and women, most in their 20s, rising to speak, calling for points of order and otherwise conducting what was obviously a community meeting. All inside were homosexuals” who wanted to create “a meaningful gay group” in Brooklyn. The reporter particularly impressed his readers with the fact that “few at the meeting resembled a straight person’s image of a homosexual . . . There were no bizarre clothes or hair, most of the group wore open shirts or sweaters and plain slacks.”

Spencer Memorial Church was a welcoming locale for a group such as GAB. The church had been founded in 1838 as a conservative alternative to Brooklyn’s First Presbyterian Church. In 1955, William Glenesk accepted the ministry. Glenesk was a radical and often controversial pastor. He incorporated artists into his services, including many who were gay (Ned Rorem, Alvin Ailey, and Alwin Nikolais). In 1968 he sponsored a two-hour worship service and symposium on the issue of homosexuality, that included most of the cast of Boys in the Band.

House of David and Jonathan

On November 6, 1970, the House of David and Jonathan conducted opening services in an upper room of the church. According to a December 1970 article in Gay newspaper, it was the country’s first gay synagogue. Rabbi Herbert Katz led the 35-member congregation, saying “Homosexuality in the Jew is perfectly acceptable. There is nothing wrong when you love if you love dearly and cherish.” Speaking afterward with a reporter for Gay, Rabbi Katz expressed his belief that David and Jonathan were not only lovers, but that the Psalms of David were love poems to Jonathan. He admitted that this viewpoint was rare, and that, in his own experience, rabbinical groups denied the existence of homosexual Jews. The House of David and Jonathan lasted only six weeks, but some members began meeting at the Church of the Holy Apostles in 1971.

In 1978-79, the Spencer Church became one of the first religious buildings in New York to be converted into apartments.