This flagpole is named for the first officer to be killed during the Civil War, Union Army Col. Elmer Ephraim Ellsworth.

C.A. Tripp, in The Intimate World of Abraham Lincoln (2005), posited that Lincoln became personally attached to the charismatic and handsome young man, and was devastated by his death. At the eastern tip of Christopher Park is a flagpole dedicated by the Greenwich Village Historical Society in 1936 to Union Army Col. Elmer Ephraim Ellsworth (1837-1861). Born in New York State, he was the leader of the first American Zouave unit when he met and went to work for Abraham Lincoln in Illinois in 1860. C.A. Tripp, in The Intimate World of Abraham Lincoln (2005), posited that Lincoln became personally attached to the charismatic and handsome young man. Tripp, a psychologist who worked with sexologist Alfred Kinsey in the 1950s, wrote the groundbreaking book The Homosexual Matrix (1975), among other works, and began his academic research on Lincoln’s sexuality in the 1990s.

Ellsworth accompanied Lincoln to Washington, and was the first officer killed in the Civil War. This happened after he had removed a Confederate flag from atop an Alexandria, Virginia, hotel that the president could see from Washington. Ellsworth was shot by the hotel’s owner on the stairway. Lincoln was devastated by his death — upon hearing the news, he burst into tears. To those who witnessed this, Lincoln said “I will make no apology, gentlemen, for my weakness, but I knew poor Ellsworth well, and held him in great regard.” Lincoln arranged for Ellsworth’s body to lie in state at the White House. Prior to burial in Mechanicsville, New York, Ellsworth’s body also lay in state in New York’s City Hall, where he was viewed by some 10,000 people. For these viewings, his body received a recently developed technique for embalming. Ellsworth was instantly considered a martyr in the North, and “Remember Ellsworth!” became a rallying cry for the Union cause. The plaque on the flagpole has the incorrect order of his name.

A rainbow flag was raised on the flagpole in 2017 at the urging of city activists. There was a brief controversy when it seemed the National Park Service would not allow this on the site of the Stonewall National Monument. The flagpole was deemed to be outside of the federal ownership, located on New York City property. 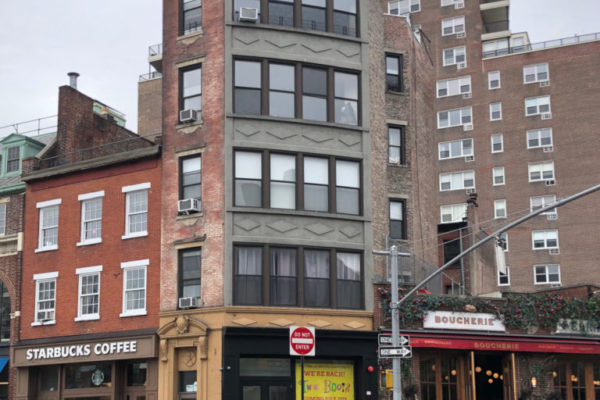