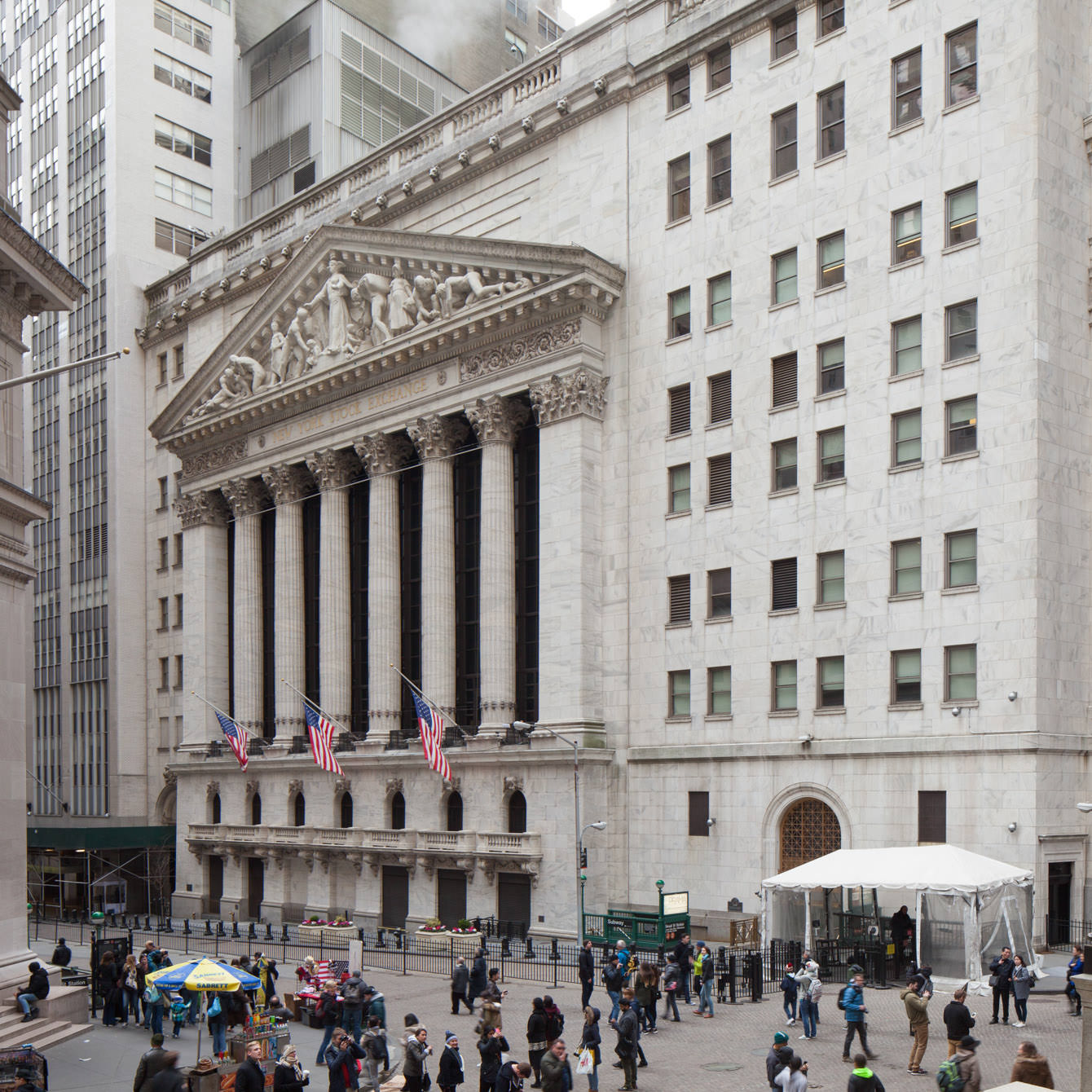 ACT UP Demonstrations on Wall Street

Formed in New York City in 1987, the AIDS Coalition to Unleash Power (more commonly known as ACT UP) brought widespread attention to the AIDS epidemic and helped make significant advances in AIDS research.

ACT UP’s first-ever demonstration in 1987 — as well as three others in 1988, 1989, and 1997 — took place on Wall Street, the world’s leading financial center, and targeted pharmaceutical companies that were profiteering from the epidemic. 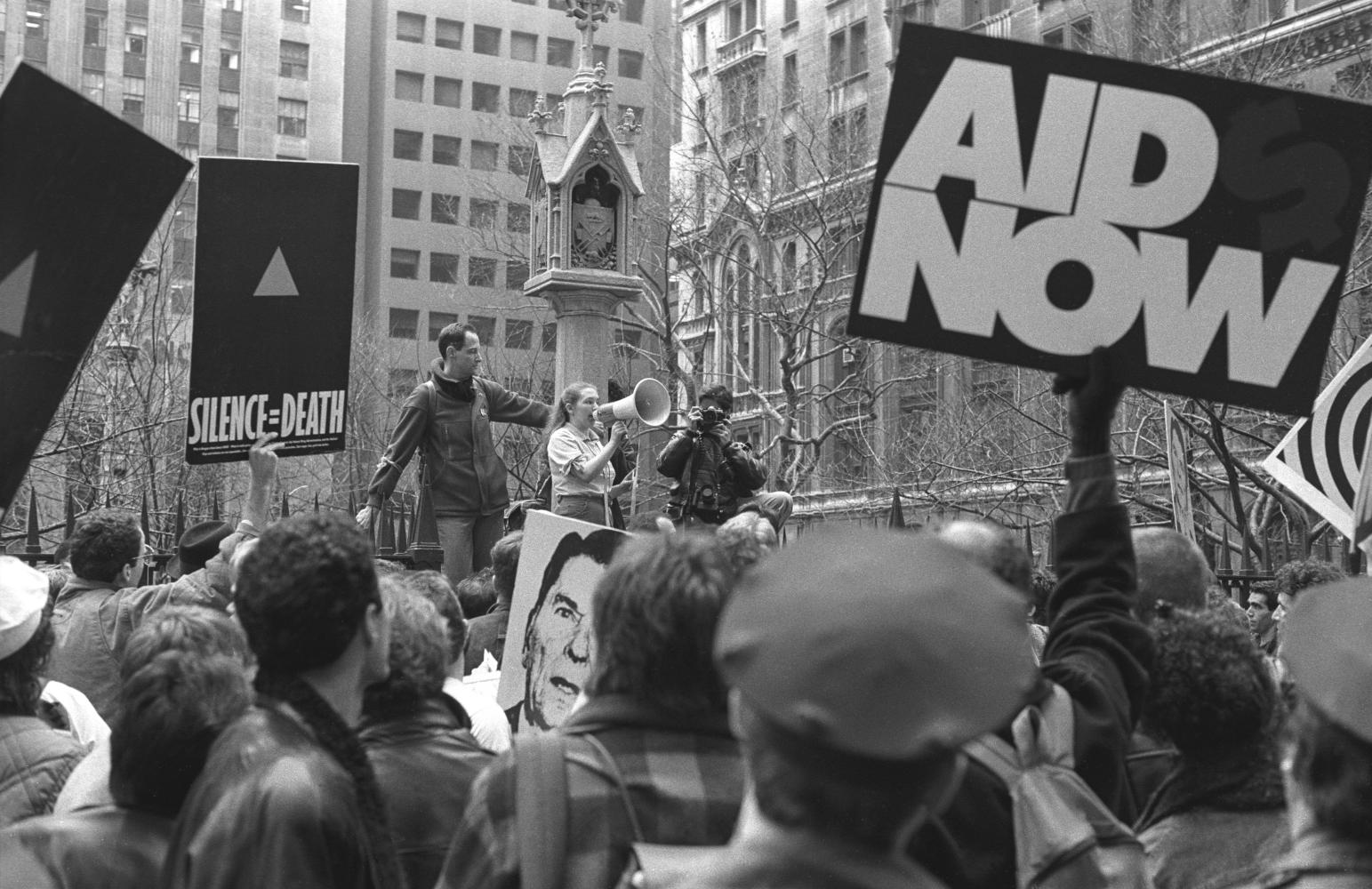 Jean Elizabeth Glass speaks to demonstrators on Broadway (just north of Wall Street), in front of the Trinity Church graveyard, March 24, 1988. Photo by and courtesy of Clay Walker. ACT UP member and Broadway performer Mark Fotopoulos and his mother demonstrate on Broadway (just south of Wall Street), March 24, 1988. Photo by and courtesy of Clay Walker. ACT UP member David Serko being dragged off by police on Broadway (with One Wall Street in the background), March 24, 1988. Photo by and courtesy of Clay Walker. Demonstrators and police at the intersection of Trinity Place and Rector Street, March 24, 1988. Photo by and courtesy of Clay Walker. Demonstrators on Trinity Place, just north of Rector Street, with Trinity Church at back right, March 24, 1988. Photo by and courtesy of Clay Walker. Demonstrators at the intersection of Trinity Place and Rector Street, with Trinity Church in background, March 24, 1988. Photo by and courtesy of Clay Walker. Demonstrators and police on Broadway (just north of Wall Street), with Trinity Church at back right, March 24, 1988. Photo by and courtesy of Clay Walker. Demonstrator on Broadway (just south of Wall Street), with Trinity Church at back right, March 24, 1988. Photo by and courtesy of Clay Walker. 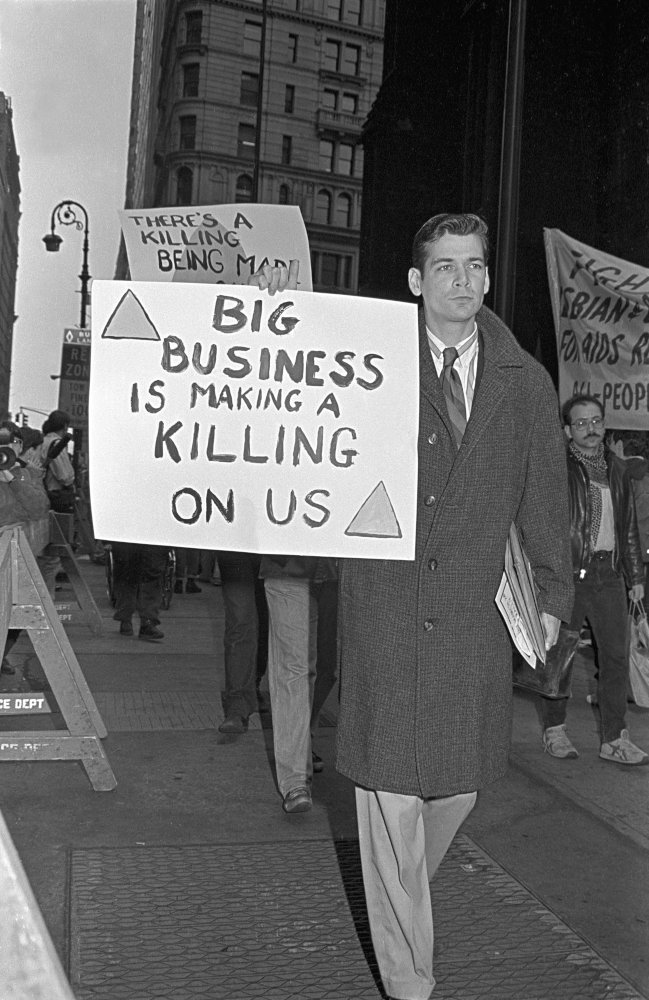 Demonstrator on Broadway (just north of Wall Street), with Trinity Church at back right, March 24, 1988. Photo by and courtesy of Clay Walker. 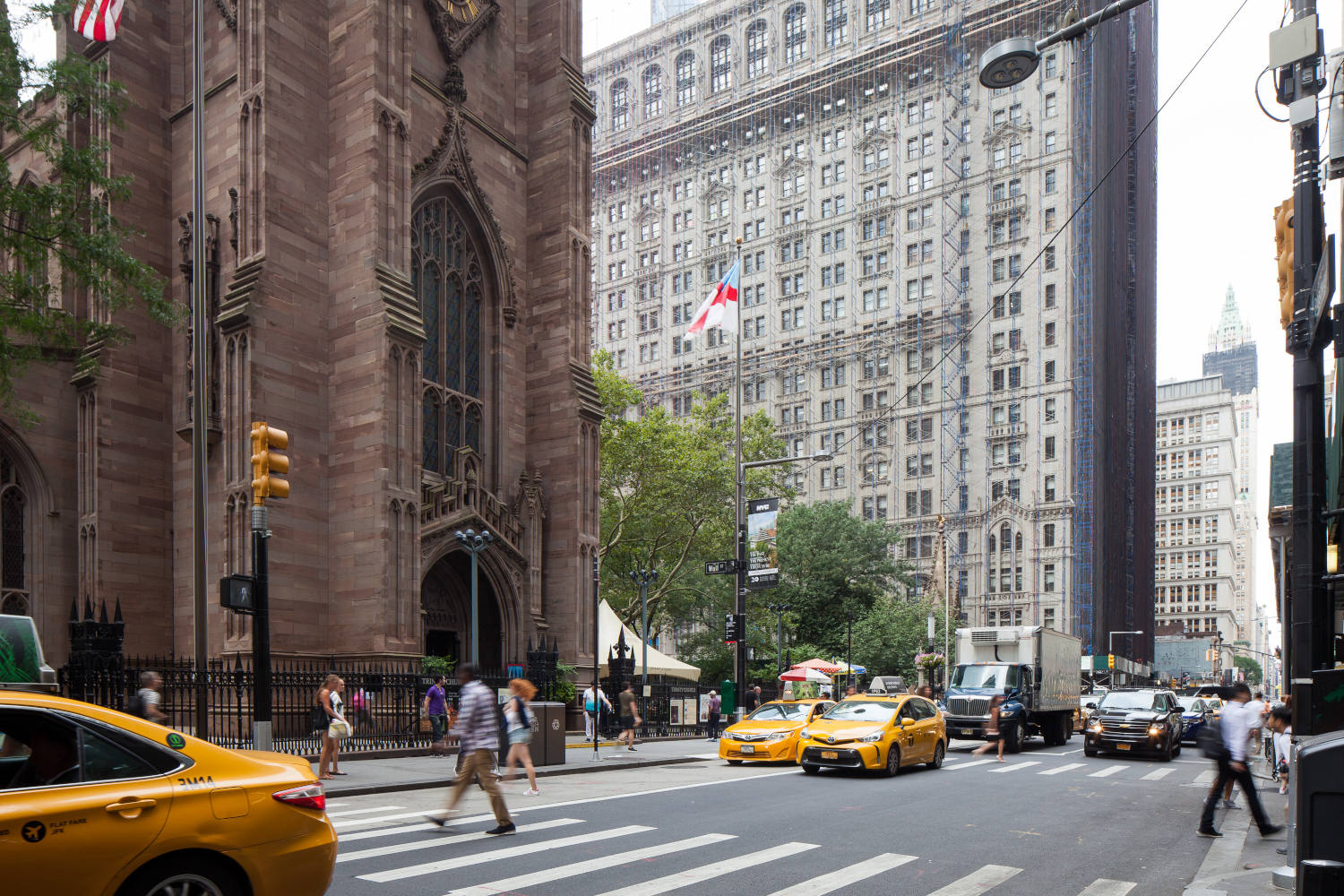 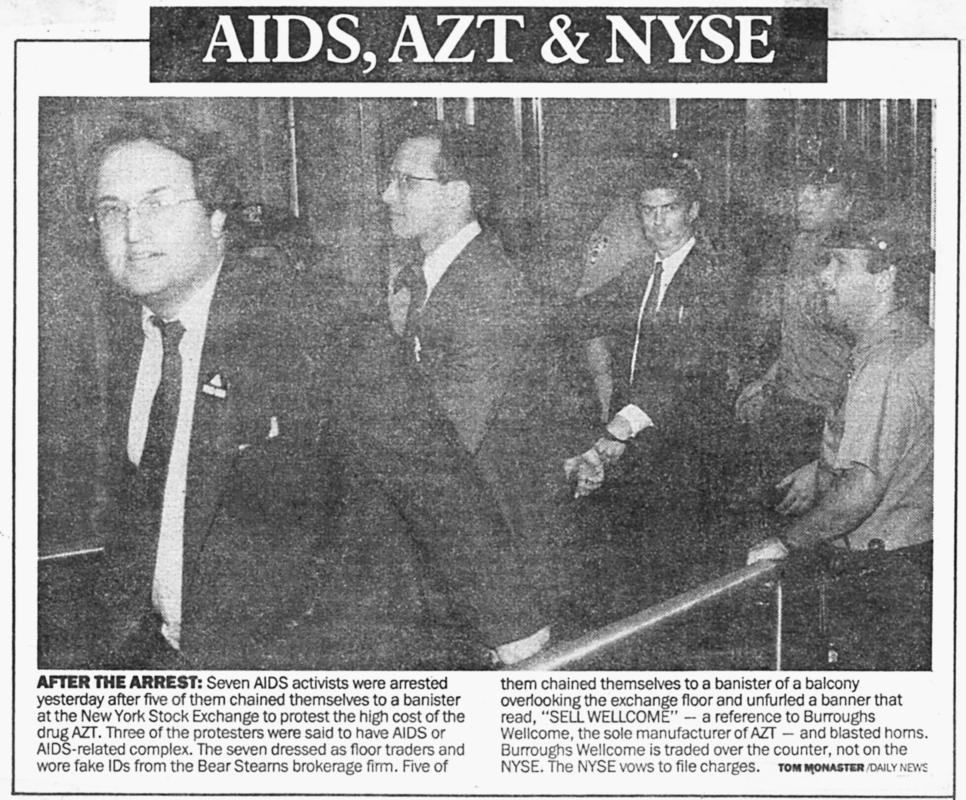 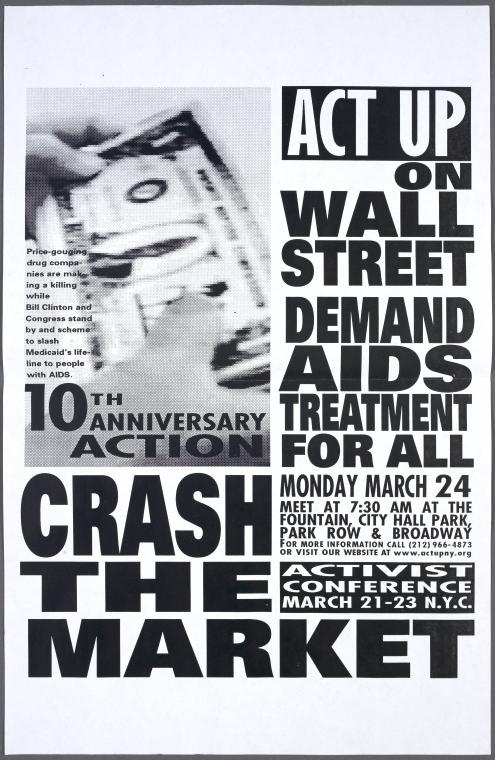 Poster for "Crash the Market," held on the tenth anniversary of ACT UP's 1987 demonstration on Wall Street. Courtesy of the New York Public Library, ACT UP New York Records.

By the late 1980s, the AIDS epidemic had impacted the lives of hundreds of thousands of people globally. New York City’s LGBT community was among the hardest hit. Government inaction and public apathy and hysteria prompted activist Larry Kramer’s impassioned speech on March 10, 1987, at the Lesbian and Gay Community Services Center (now the LGBT Community Center) in Greenwich Village. As a result, two days later, the AIDS Coalition to Unleash Power (ACT UP), a political action group that sought to affect change and bring widespread attention to the AIDS crisis, formed. “Silence = Death,” which became its motto and was used in a lot of its imagery, was adopted from the iconic poster designed in 1986 by the Silence=Death Project, which later became Gran Fury, an activist art collective formed within ACT UP in January 1988.

The group’s first (and ongoing) target was the pharmaceutical industry, which was profiteering from the AIDS crisis by selling drugs that most people living with HIV/AIDS could not afford. ACT UP also accused the industry of not doing research to find a cure or better treatments for AIDS. Four demonstrations took place on Wall Street, the world’s leading financial center and home to the New York Stock Exchange, in the 1980s and 1990s.

1987 Demonstration on Broadway and Wall Street
ACT UP’s first-ever demonstration took place on March 24, 1987, at the busy intersection of Wall Street and Broadway, near Trinity Church. The location was chosen with the goal of causing a major disruption during the morning rush hour. Some 250 protestors, many of whom laid down in the street and/or held signs, called for corporate and government action to end the AIDS crisis, which by that point had been going on for over five years. The group specifically targeted Burroughs Wellcome — the pharmaceutical company that manufactured the high-priced AZT, the only approved AIDS drug at the time — and the Food and Drug Administration (FDA). An effigy of FDA Commissioner Frank Young hung on the facade of Trinity Church. Demonstrators chanted phrases such as “We are angry, we want action” and “Release those drugs.” Seventeen people were arrested.

A flyer announcing the protest listed several immediate demands, including the release of life-saving drugs by the FDA, the availability of affordable drugs, educating the public to combat the spread of AIDS, and enacting policies to end AIDS-related discrimination in the workplace, housing, insurance, and medical treatment. Soon after the demonstration, the FDA announced it would shorten its drug approval process by two years (a process that normally could take up to nine years, time that those then living with HIV did not have).

First Anniversary of the 1987 Demonstration
On March 24, 1988, ACT UP held another demonstration on Broadway and Wall Street, to mark the one-year anniversary of its first action. The group, having grown in size since it first formed, was able to organize a much larger demonstration of over 1,000 people to protest pharmaceutical companies and government inaction. Demonstrators also gathered on Trinity Place and Rector Street. People chanted “No more business as usual” as 111 people were arrested. Gran Fury photocopied thousands of dollar bills with messages on the back that they then scattered on the streets for passersby to pick up.

ACT UP’s website notes that “AIDS activism” as a concept had gained credibility by this time.

[ACT UP]…set off hundreds of fog horns which echoed through the narrow streets of [Lower] Manhattan, drawing people as high up as the 30th floors of buildings to their windows.

Separate from the noon rally, ACT UP members Peter Staley, Lee Arsensault, Greg Bordowitz, Scott Robbe, and James McGrath infiltrated the Stock Exchange that morning. They were joined by members Robert Hilferty and Richard Elovitch, who photographed the action. Chaining themselves to the VIP balcony, they dropped fake $100 bills onto the trading floor and disrupted the opening bell for the first time in history. The photographs were given to the Associated Press and the story went national. As a result of these demonstrations, Burroughs Wellcome lowered the price of AZT four days later.

Tenth Anniversary of the 1987 Demonstration
On March 24, 1997, the ten-year anniversary of ACT UP’s first demonstration, the group returned to Wall Street. The action, called “Crash the Market,” again protested the profiteering of pharmaceutical companies, but also cutbacks in Medicaid funding. ACT UP chapters from New York, Los Angeles, San Francisco, Atlanta, Washington, D.C., Las Vegas, Philadelphia, and Oberlin, Ohio, brought over 500 activists, who gathered at 7:30 a.m. by the fountain in City Hall Park. They then marched south to Wall Street, chanting “We die — they make money” and “Wall Street trades on people with AIDS!” Demands for Congressional hearings on the price of AIDS drugs were also made. Protesters rushed the doors of the Stock Exchange or sat down in the streets. During the demonstration, 73 people (mostly women) were arrested for acts of civil disobedience.