The group highlights the community’s influence in the arts, literature, and social justice 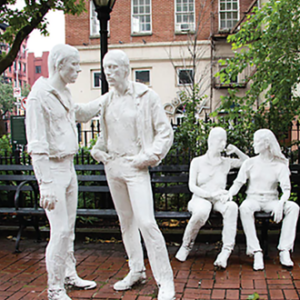 NEW YORK — We looked up at the modest three-story building at 337 Bleecker St. in Greenwich Village. It was officially listed to the National Register of Historic Places in April 2021. This was the former residence of Black lesbian playwright and activist Lorraine Hansberry, who lived here in a third-floor apartment from 1953 to 1960. It’s here where Hansberry wrote “A Raisin in the Sun” (1959), becoming the first African American playwright and the youngest playwright ever to win the New York Drama Critics’ Circle Award for Best American Play. It’s also where Hansberry read the play aloud to her friend Philip Rose, who went on to produce it, and where she posed for a Vogue magazine article, one month after the play’s premiere.

The national recognition for this historic site is due in large part to the work of the NYC LGBT Historic Sites Project, which highlights New York City LGBT community’s influence in the arts, literature, and social justice. It also nominates sites to the National Register of Historic Places. The modest three-story building in Greenwich Village was the former residence of Black lesbian playwright and activist Lorraine Hansberry, who lived here in a third-floor apartment from 1953 to 1960. It was officially listed on the National Register of Historic Places in April 2021.COURTESY/NYC LGBT HISTORIC SITES PROJECT

Our project encourages you to take a second look at the physical places you walk past every day and to appreciate a history that, until our initiative, has largely been invisible,” says Ken Lustbader, co-director, NYC LGBT Historic Sites Project. “If you visit our website map, you’ll see that we’ve created an LGBT cultural heritage landscape.”

The project has identified 350 significant sites throughout the city that are important to LGBT history and offers 22 curated themes and tours. For example, the AIDS Crisis tour includes residences of influential AIDS activists and artists, and locations where events and demonstrations were held, and the Art and Architecture tour highlights the ways LGBT people have helped shape the landscape of the city. The 1970s Lesbian Activism and Community tour includes 16 sites, like the Women’s Liberation Center, which was just listed on the National Register of Historic Places in May 2021, and the former residence of renowned Black lesbian activist Audre Lorde. The Broadway Theater tour is the largest, with 42 sites.

We decided to explore Greenwich Village, an historic center for the LGBT community, and hub of activism. The self-guided Greenwich Village history tour, made in partnership with the National Parks Conservation Association, was one of the first themed tours the organization developed. It includes 17 sites within an easy, walkable loop. Entrance to the Snake Pit was in the basement of this corner building. In 1970, less than a year after Stonewall, the police raided the Snake Pit bar and detained many people at the local police station, sparking protest marches and demonstrations.COURTESY/NYC LGBT HISTORIC SITES PROJECT

After visiting the Hansberry House, we walked to Christopher Park, where the tour begins. The park was designated the Stonewall National Monument in 2016 to recognize the 1969 Stonewall Uprising, a key turning point in the LGBT civil rights movement. After the uprising, Christopher Street would become one of the best-known LGBT streets in the world and remains a popular area for LGBT and queer youth of color.

We strolled the park and read the tour map. “Bleecker Street in the 1890s had a number of ‘fairy’ bars, often subject to raids, where cross-dressing young men solicited male customers,” according to the tour guide. Later, the Village became one of the first neighborhoods in New York City with a large LGBT population, and the location of many bars and clubs that welcomed LGBT customers. “Gay bars were crucial to creating a sense of community and cultivating political action in an era of discrimination,” we read. After the 1969 Stonewall Uprising, Christopher Street would become one of the best-known LGBT streets in the world.COURTESY/NYC LGBT HISTORIC SITES PROJECT

We passed the site of the infamous Stonewall Inn, the bar that police raided in 1969, sparking the uprising and the site of the former office of the Mattachine Society, an early national gay rights organization, once considered quite radical. It’s now home to the historic Kettle of Fish bar, established in 1950 and popular with beat musicians and writers.

We visited Marie’s Crisis Café, an historic piano bar that first opened in 1920 as a speakeasy, and discovered that the lesbian novelist Patricia Highsmith was a regular here. Highsmith wrote 22 novels under the pen name Claire Morgan, including “Strangers on a Train” and “The Talented Mr. Ripley.” Many of her novels were set in Greenwich Village. Next, we headed to Washington Place to the site of the start of New York’s First Pride March, held in 1970.

It was a beautiful, warm spring day, and the village was hopping. After the long COVID-19 shutdown and slowdown, folks were out and about, sidewalk cafes, and coffeehouses were open, and parks were filled with dog walkers and families. It felt good. The infamous Stonewall Inn is the bar that police raided in 1969, igniting the Stonewall Uprising.COURTESY/NYC LGBT HISTORIC SITES PROJECT

We didn’t mind hauling it up to 10th Street to visit Julius’ Bar. During the 1960s, the New York State Liquor Authority regularly revoked the licenses of bars known to serve gay men and lesbians. On April 21, 1966, members of the Mattachine Society staged the Sip-In protest here, publicizing and challenging the Authority’s discriminatory practice. According to our tour map, “It was one of the earliest pre-Stonewall public actions for LGBT rights and a big step forward in legitimizing LGBT bars in New York.”

We ended our tour with a walk down Greenwich Avenue, once known as the “cruisiest street in the Village.”

For more information, visit www.nyclgbtsites.org. In addition to the 350 historic Web entries, the NYC LGBT Historic Sites Project is now researching 300 additional sites in the city, and working on other themes, including City of Immigrants, Communities of Color, Progressive-Era Reformers, and Gay-Owned Businesses. They’re also planning to produce brief, virtual thematic tours that viewers could watch on their YouTube channel.