In 1977, Studio 54 opened and became one of the world’s most famous discos with a fusion of gay, bisexual, and straight patrons.

Owners Steven Rubell and Ian Schrager modeled the club after New York’s gay nightclubs, which were setting the trends for music and dance. 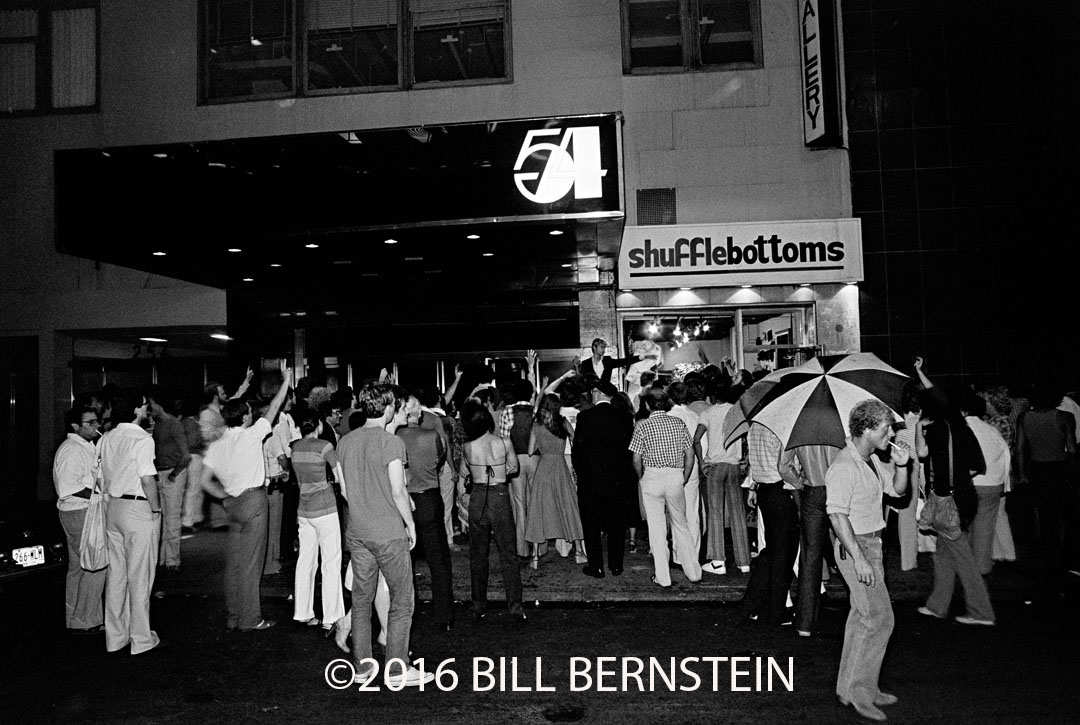 Studio 54 entrance, 1979. Photo by and courtesy of Bill Bernstein, www.billbernstein.com. Studio 54 lights and dance floor. Photo by and courtesy of Bill Bernstein, www.billbernstein.com. "Man in the Moon with a Cocaine Spoon" sculpture inside Studio 54, 1977. Photo by and courtesy of Bill Bernstein, www.billbernstein.com. Truman Capote (center) with Liza Minnelli and Steve Rubell at Studio 54 in an undated photo. Photographer and source unknown. 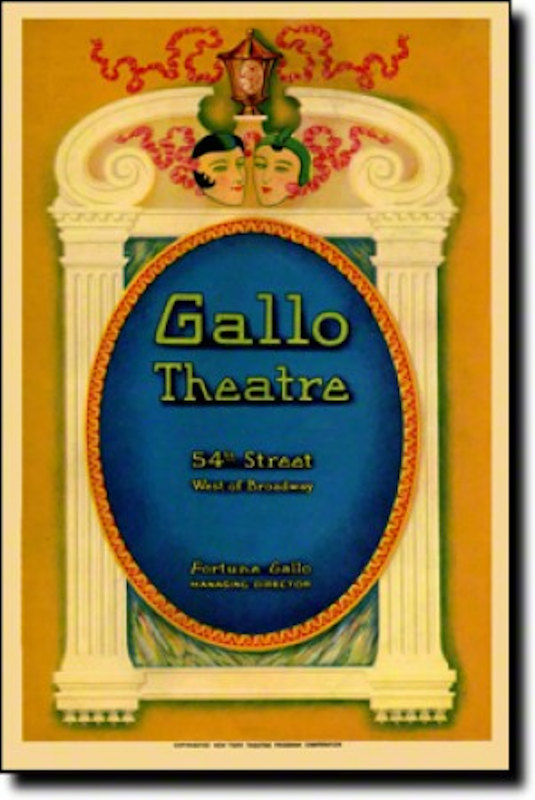 Playbill cover for Rainbow at the Gallo Opera House, 1928. 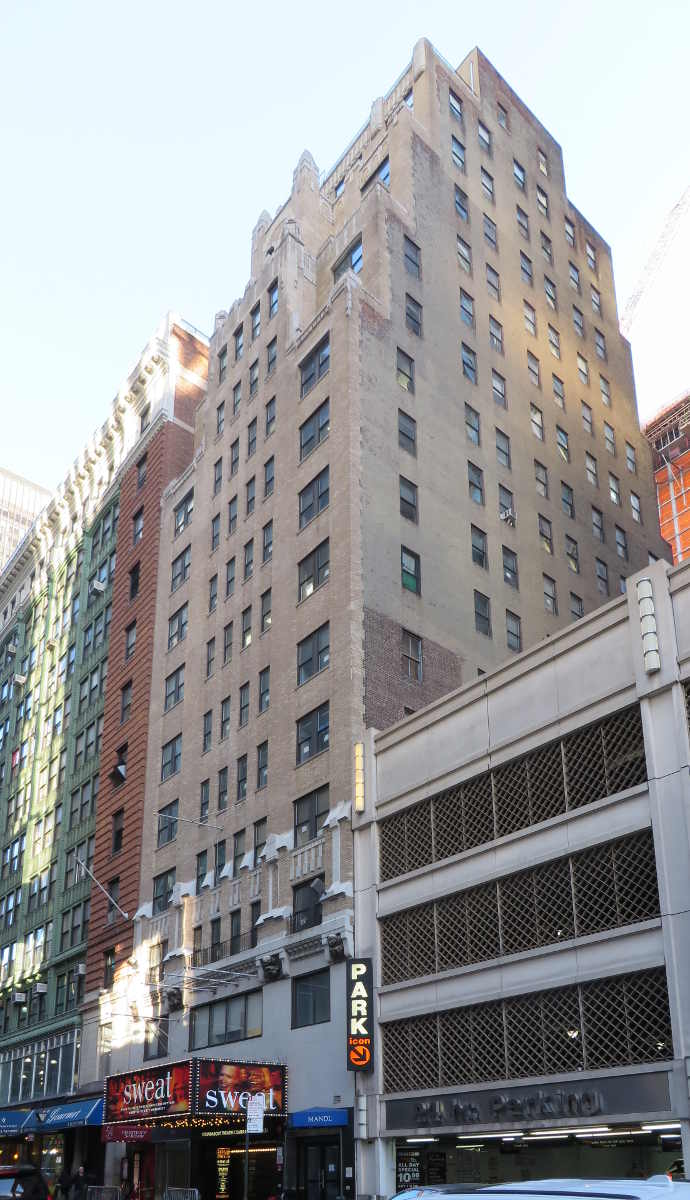 The building in 2017. Photo by NYC LGBT Historic Sites Project.

Opened as the Gallo Opera House in 1927, it was foreclosed after the stock market crash in 1929, and became the New Yorker Theater. There was one production here with LGBT associations – Rainbow (1928), with singer/actor Libby Holman. It became the Casino de Paris nightclub in 1933, the New Yorker Theater again in 1939 under the Federal Theater Project of the Works Progress Administration, and was a CBS television studio from 1942 to 1972.

Legendary nightclub Studio 54, the brainchild of Brooklyn-born Steve Rubell and Ian Schrager, operated here during its first incarnation from April 1977 to February 1980. The two sold the business in 1980 and the club soon reopened operating until 1986, but without the glamour of its heyday.

By 1976, discomania was sweeping the nation with over 8,000 dance clubs throughout the country. Rubell and Schrager wanted to create a new nightclub that replicated the energy of New York’s gay clubs, which were more dance oriented and sexually charged. They were inspired after visiting Le Jardin at 110 West 43rd Street (in the basement of the now-demolished Diplomat Hotel), a gay nightclub that became one of the first to blur the line between gay, bisexual, and straight spaces.

Studio 54 was transformed into a disco in six weeks with a modest investment of $400,000. Among the design team were many gay men that included architect Scott Bromley and those who later died of AIDS: interior designer Ron Doud, sound designer Richard Long (also for the Paradise Garage), and graphic designer Gil Lesser (known for his award-winning poster for “Equus”).

The club was known for its velvet rope door policy where Rubell hand selected guests ranging from unknowns to high-profile gay, bisexual, and straight celebrities. At capacity, the club could accommodate 2,000 patrons with a 5,400 square-foot dance floor and 85-foot high ceilings. Special effects included fluttering fabric flames, floating aluminum strips, neon wheels, strobe lights, and the legendary animated Man in the Moon with a Cocaine Spoon sculpture. Well-built bartenders and busboys dressed in gym shorts and sneakers added to the sexual energy of the music and crowd.

Artists who made live appearances included frequent patrons Grace Jones and Donna Summer as well as Sylvester, James Brown, Gloria Gaynor, and the Village People. In 1979, Rubell and Schrager were arrested for tax evasion, and the club closed in February 1980 with “The End of Modern-day Gomorrah” party. During its second incarnation, Studio 54 was host to emerging artists including Culture Club (with lead singer Boy George), Duran Duran, Madonna, Menudo, and Wham! (with lead singer George Michael).

In 1998, the Roundabout Theatre Company, retaining the name Studio 54, took over the former space with the opening of the enormous hit revival of Cabaret (1998-2004, Best Revival of a Musical Tony Award), which was transferred from the Kit Kat Klub (Henry Miller’s Theater). Based on I Am a Camera by John Van Druten (which was based on stories by Christopher Isherwood), Cabaret featured music and lyrics by John Kander and Fred Ebb, and costume design by William Ivey Long. Alan Cumming (Best Actor in a Musical Tony Award) played the leading role, followed by Raul Esparza, Matt McGrath, and Neil Patrick Harris.

The basement of the former club was converted to the cabaret in 2012 now named Feinstein’s/54 Below due to its alliance with Michael Feinstein.