Housed in this office building, Richmond College, a division of the CUNY system that later became the St. George campus of the College of Staten Island, was a major center of LGBT activities on Staten Island in the 1970s.

During that period, the college had separate gay men’s and lesbian student groups, employed a number of prominent LGBT faculty members, offered gay- and lesbian-themed courses, and hosted a number of LGBT cultural events, including a Lesbian Conference in 1973. Phyllis Chesler, author of Women and Madness, reads from her new book at Dalton Book Store, 1981. Photo by Bettye Lane. Source: Schlesinger Library on the History of Women in America, Radcliffe Institute. Richmond College opened in this building in September 1967, as an “upper division” college, serving juniors, seniors, and graduate students. This enabled graduates of Staten Island Community College to complete their education within the CUNY system without having to travel off the island. With an unusually young faculty, the college soon gained the reputation as “the most progressive in New York,” according to Larry Mitchell.

In the fall of 1969, Mitchell began teaching in the Sociology Department at Richmond College, at about the same time as he joined the recently formed Gay Liberation Front in Manhattan. By the end of 1970, Mitchell had come out at the college and invited Jim Owles, Pete Fisher, and Vito Russo from the Gay Activists Alliance, which was then doing outreach at college campuses around New York City, to speak in his sociology class. The following year he helped organize a student group “Gay Lib, Richmond College.” The group engaged in a number of activities, including taking over a lounge for two “gay-ins.” In 1972, Mitchell offered a class in Gay Oppression and Liberation, in part taught and attended by lesbians and gay men from the school and from the nearby commune where he was living.

By 1973 a group of lesbians at Richmond College split off to form the “Lesbians United Collective,” and “Gay Lib” became the “Gay Men’s Collective.” Richmond College had early on attracted a number of feminist teachers. It began offering Women’s Studies courses around 1970 and in 1972 it became the first college in the CUNY system and one of only six colleges in the country to offer a Bachelor’s degree in Women’s Studies. According to a 1973 article in Mother Jones, half the Women’s Studies faculty was lesbian. They included program director and English professor Bertha Harris, who wrote the novels Confessions of Cherubino (1972) and Lover (1976) and co-authored The Joy of Lesbian Sex (1977) while she was on the faculty, and Sue Perlgut, a founder of the It’s All Right to Be Woman Theatre collective, who taught a Women’s Theatre Workshop. Phyllis Chesler, author of Women and Madness (1972), who taught psychology at Richmond College and the College of Staten Island from 1969 to 1998, was a founder of the Women’s Studies program and continued to teach courses for the program throughout her career. Although she dated men during her early years at the college, Chesler was very much a part of the Greenwich Village radical feminist scene, had many bisexual and lesbian friends, and later came out as bisexual. Dorothy McCormack, the Dean of Students in the early 1970s, was also a lesbian and active in the Gay Academic Union. Women Studies courses during the early 1970s included Lesbian Culture, Self-Identity of Lesbians, and Cultural Perspectives on Sex Roles.

Lesbian music and culture were also a part of campus life during these years. The lesbian band Crazy Quilt played the college in May 1972, and in November 1974, Alix Dobkin and Kay Gardner made a farewell appearance with Lavender Jane. In May 1973, the Lesbians United Collective sponsored a Lesbian Conference that featured workshops on such topics as “Third World Lesbians,” “Dyke Separatism,” “Sexual Techniques,” and “Lesbian Mothers.” In October 1976, Phazes of the Moon, a women’s spirituality group, held a two-day conference at Richmond College, titled “A Celebration of the Beguines,” with a variety of workshops on spirituality, sexuality, and herstory.

In 1976, when Richmond College was threatened with closure because of New York City’s fiscal crisis, it merged with Staten Island Community College, which was part of the SUNY system, to form the College of Staten Island, with the original Richmond College building at 130 Stuyvesant Place becoming the core of the St. George campus. In 1978, the Gay Men’s Collective became the Gay Students Center. It maintained a gay library and offered a space for parties and dances. Lesbians United remained a separate group until at least 1990. Both Mitchell and Chesler continued at the College until the 1990s, teaching in their respective departments and for Women’s Studies. Chesler went on to publish 16 books. Mitchell, who moved to the East Village, published several novels in the 1980s and 1990s chronicling gay life in the East Village and the Lower East Side as well as the AIDS crisis, and established his own press, Calamus Books, which specialized in gay male literature.

After the College of Staten Island moved to its present campus on the grounds of the former Willowbrook School, 130 Stuyvesant Place was renovated for use as a government office building. 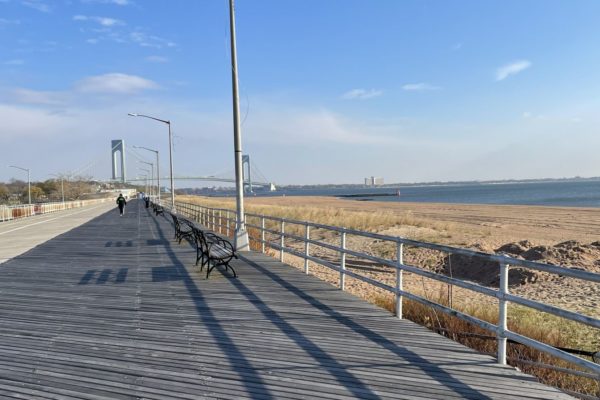