also known as the Elks Lodge

A rare surviving Harlem building that hosted drag balls, the Imperial Lodge of Elks (also referred to as the Elks Lodge) was prominently featured in the documentary Paris Is Burning (1990), which focused on the city’s 1980s ballroom scene.

Drag queens, gay men, and trans women of color from several notable houses from that era competed here, including those from the House of LaBeija, the House of Xtravangaza, and the House of Ninja. Pepper LaBeija, mother of the House of LaBeija, at a ball held at the Elks Lodge, late 1980s. A taxidermied elk head is visible on the balcony at upper left. Source: Screen capture from Paris Is Burning (1990). 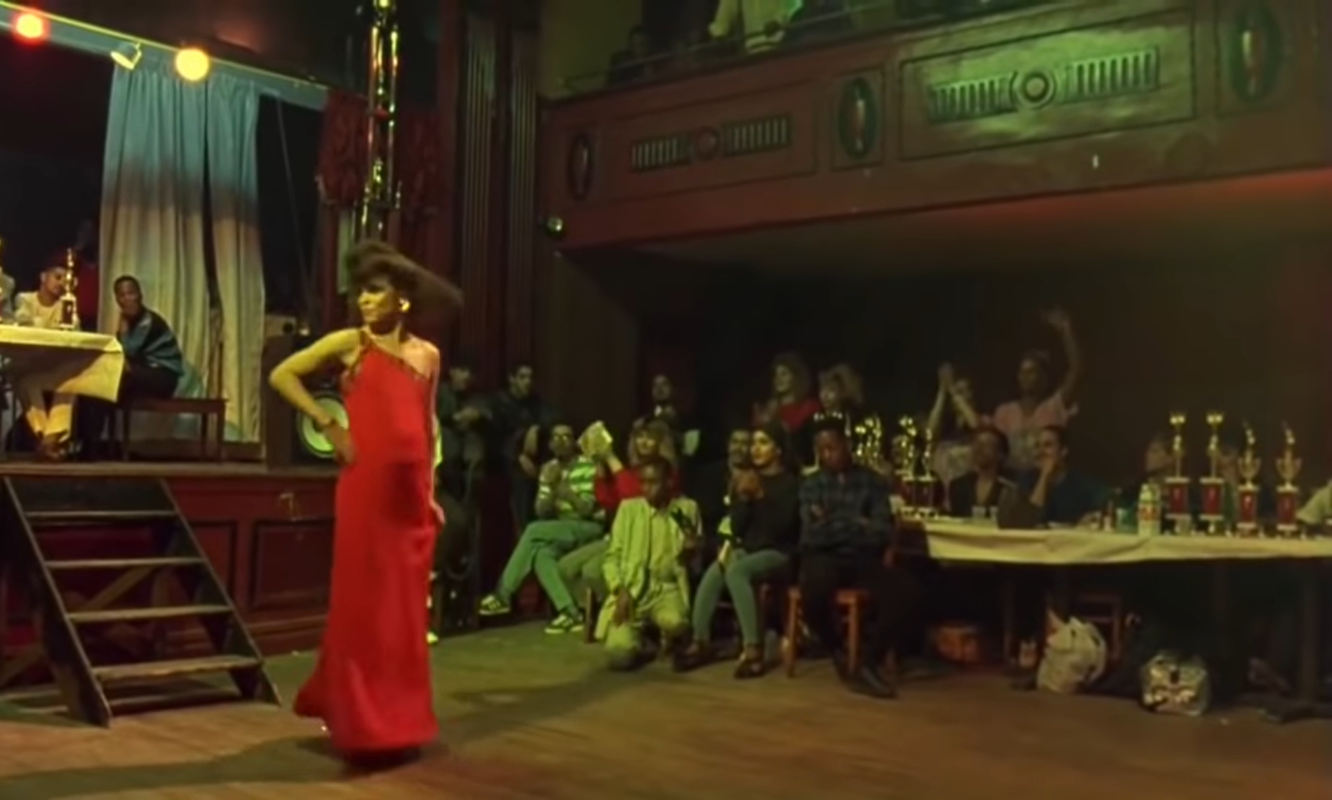 A ball contestant at the Elks Lodge, late 1980s. Source: Screen capture from Paris Is Burning (1990). Willi Ninja, founder and mother of the House of Ninja, voguing at a ball at the Elks Lodge, late 1980s. Source: Screen capture from Paris Is Burning (1990). Angie Xtravaganza (back left), mother of the House of Xtravaganza, receiving the "Mother of the Year" award for 1986 at the Elks Lodge, late 1980s. "ELKS" is written in black paint on the floor, visible at lower left. Source: Screen capture from Paris Is Burning (1990). Kim Pendavis of the House of Pendavis sewing an outfit for a ball competition, late 1980s. Source: Screen capture from Paris Is Burning (1990).

Annual drag balls began taking place in the late 19th century around Manhattan and reached their peak of popularity during the Harlem Renaissance in the 1920s and 1930s. One of the largest such events, held in Harlem’s Rockland Palace (demolished), was the Hamilton Lodge Ball, also known as the “Faggots Ball” for the hundreds of male and female participants in drag. The balls drew thousands of straight spectators. Contestants were Black and white, though Black participants felt discriminated against, even in Harlem, in white-organized balls and eventually began hosting their own balls by the early 1960s. This began the modern era of drag ball culture that still exists today.

Harlem’s Imperial Lodge of Elks (also referred to as the Elks Lodge), built for a Black fraternal organization in 1922-24, opened with a dance hall. The lodge was prominently featured in Paris Is Burning (1990), the award-winning documentary on the city’s underground competitive ballroom scene of the late 1980s. The footage shows participants, judges, and spectators in the dance hall, with its elevated stage and paneled, red-painted U-shaped balcony overlooking the wood dance floor, which has “ELKS” written in black paint. A taxidermied elk head hangs on one of the balcony walls.

Pepper LaBeija, mother of the House of LaBeija, spoke of the importance of the balls to the community: “Those balls are more or less like our fantasy of being a superstar, you know, like the Oscars or whatever, or being on a runway as a model. You know, a lot of those kids that are in the balls, they don’t have two of nothing. Some of them don’t even eat. They come to balls starving and they sleep in the Under 21 or they sleep on the pier or wherever. They don’t have a home to go to, but…they’ll go out and they’ll steal something and get dressed up and come to a ball for that one night and live the fantasy.” Participants competed in various categories and earned “legendary” status for themselves and their houses after consistent wins. Voguing, a highly stylized dance, originated in the Harlem ballroom scene of the late 1980s.

Houses and the balls were heavily affected by the AIDS epidemic, though ball culture remains active and influential today. In 1997, the Imperial Lodge of Elks was converted into a church and is now occupied by the Faith Mission Christian Fellowship Church. It has new interior paneling, but the original molding, balcony, and stage are still intact.