“Why We Are Marching:” Remembering the October 1979 March on Washington

This past weekend marked the anniversary of the 1979 National March on Washington for Lesbian and Gay Rights. Revisiting and rereading the information circulated to inform the LGBT community — and the public at large — of the need for this organizing is especially pertinent in our current political climate.

From “Why We Are Marching” flier, circulated in advance of the 1979 March on Washington:

“1979 is the tenth anniversary of the Stonewall Riots, the historic rebellion that helped to launch the current wave of lesbian and gay liberation. What better way for us to commemorate this anniversary than by mobilizing our sisters and brothers, as well as all our supporters, in the first national march for lesbian and gay rights. The march will be a celebration of our community solidarity and a sign of our political strength …

“… We will be in Washginton, building a broad, mass movement to fight for our freedom. Our demonstration will insist on freedom for all gay people and must reflect the anger and pride of our community in the face of government callousness, double-talk, and inaction. We should march on Washington, not plead with the government for token concessions, but to demand and struggle for liberation and an end to persecution.” 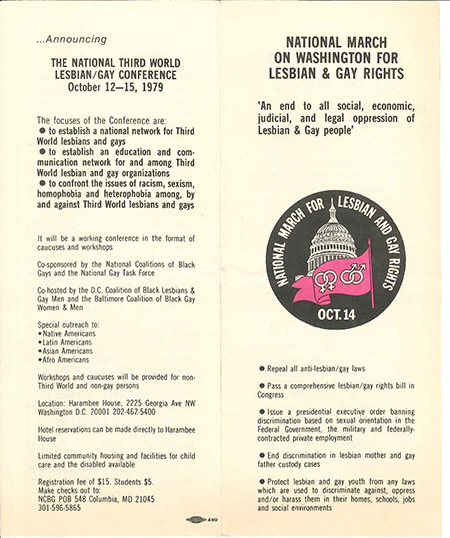